The Concocted Dream of Haze: An interview with Say Lou Lou

Elektra June (left) wears a dress by Roberta Einer and earrings from the Stylist’s Archive.
Miranda Anna (right) wears a jacket and trousers by Steve O Smith and earrings by Ashley Williams.

SAY LOU LOU has the ring of an obscure French ballad unearthed from the past or perhaps a mystic mantra in a Saint’s honour, but there is one certainty, the repetition of sounds as you pitch it forth off your lips.

Elektra June and Miranda Anna Kilbey-Jansson echo their band’s namesake with their tandem existence, not just as twin sisters but of something much more looming concocted in their sound—complete with cinematic impulses, layered sound waves, and beguiling pitch-perfect vocals. “What we are making is multidimensional, representative of one person but filled with living contradictions.”

When you enter a conversation with SLL, you are treated to a lark-laden sing-song chorus of two voices speaking rapid-fire without pretence. It is quite impossible to distinguish their voices as they form complete ideas by a spoken set of fragments. When I speak to them, I willingly listen with no need for distinction, after all, we talk at great length about the conceptual whole in art and what is the heir not so apparent in what they are making in their constructed world of sound. 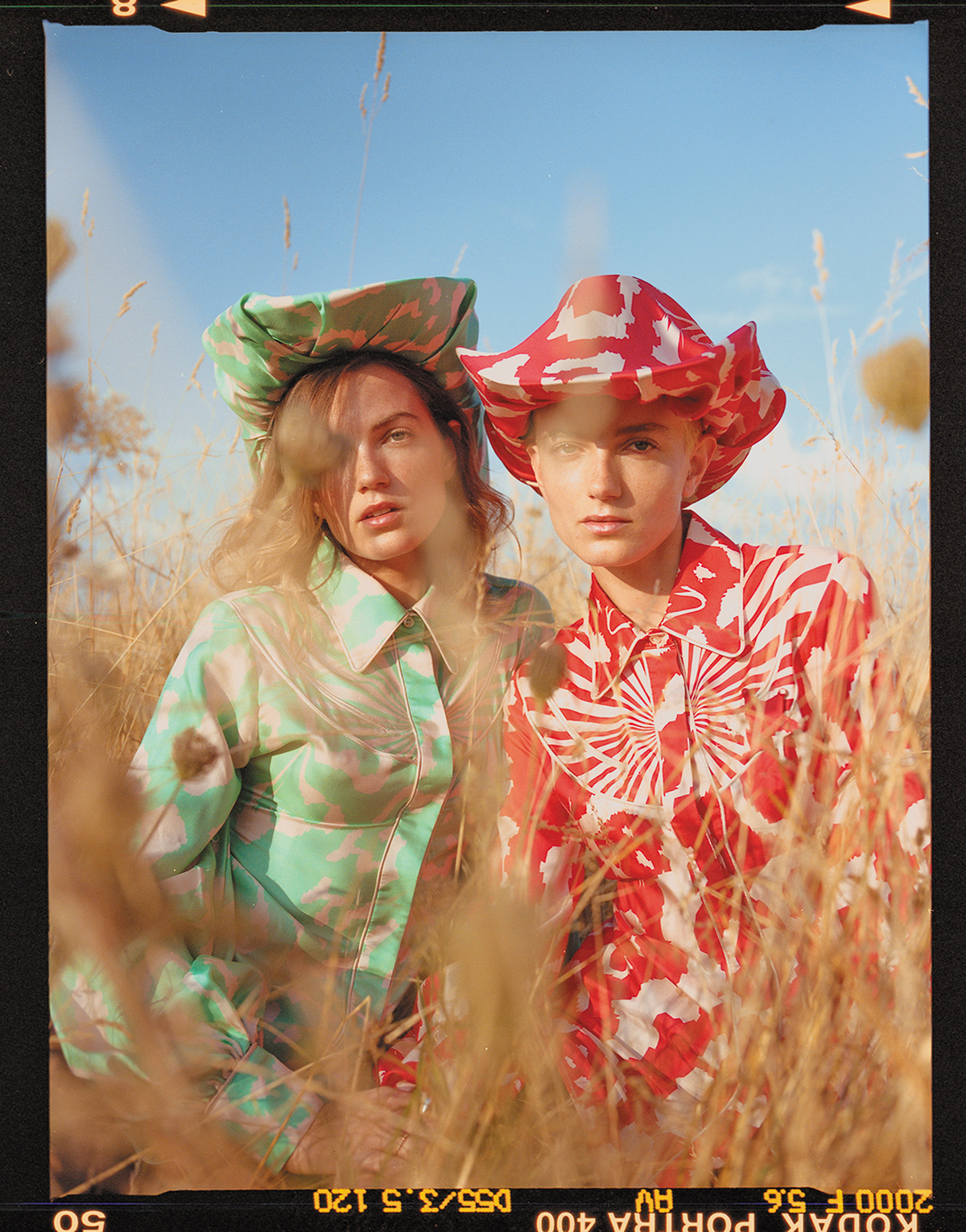 Both wear looks by Katie Eary

Elektra and Miranda are preparing for a visit of guests from ‘their homeland’ Sweden. They grew up in both Australia and Sweden which partially explains their liquid honey accents which range from harmonies to bold declarations on how the world assigns people with its own conclusions. They are absolute in their resolve not to be labelled as twin sisters, but as women, as artists and have an impressive impetus to say, “Fuck what the world thinks we should be making.” I tell them, in the beginning, we are not here to repeat the fact that they’re rock royalty lineage or the fact that they’re twins. They let out a glowy shriek as they realise we are here to talk about their art, their vision, their music, and an electric current start to pulse as they start to pour out gut-ridden truths.

We enter an inspirited mode discussing PJ Harvey in which they spontaneously sing in high-pitched perfection: “Lickk myyy legssss.” Fast-forward to them musing on her feather-crowned persona that morphs into an album dedicated to the workers of England. We delve in, to agree: this is not her act, this is her evolution. They tell me their recent album entitled Immortelle Manifesto was made with a guttural longing that was also terrifying. It was not written with cool complicity. They use the word commitment in a way that becomes gospel. In Laurel Canyon, they housed themselves and two others who composed their conceptual leanings through experimentation. I flash back to The Stones holing up in Nellcôte to record Exile on Main St. SLL is steadfast that they needed the focus that comes from isolation without a need to start and stop. 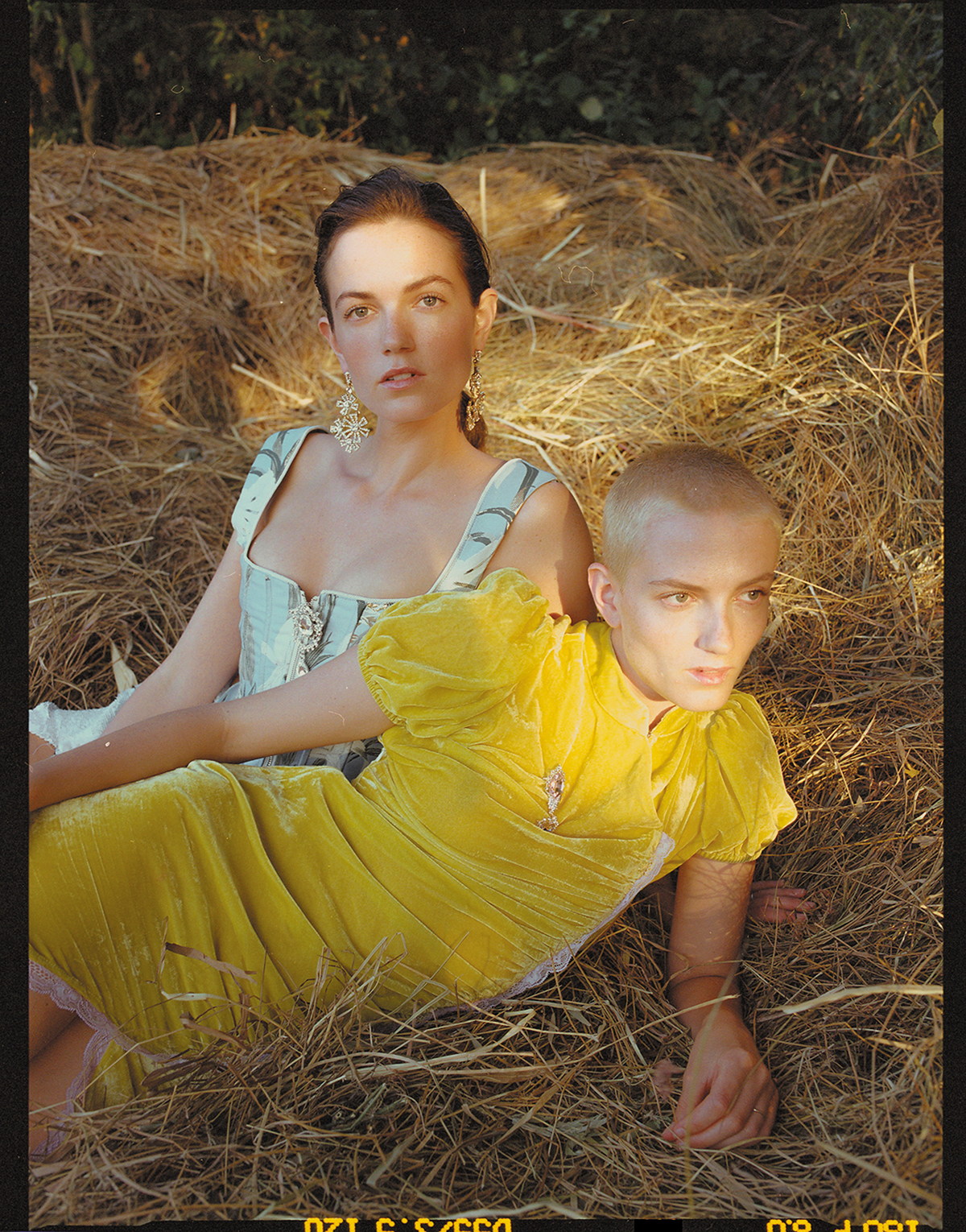 Elektra June (left) wears a corset and skirt by No Dress, and earrings from the Stylist’s Archive.
Miranda Anna (right) wears a dress by No Dress.

In a sparked moment, they tell me the first song on the record, “Ana”, was written when they were in Nicaragua with their future collaborator. He played a few chords he had been working on and they collectively spun into their own language. It is very clear they wanted to brave the unknown. They were not out to make something that was acceptable or understood with ease. This is the part where it is of consequence to understand they came from a storied rock lineage and the expectation and pressure that inherently comes with that. They dauntlessly walk towards their own light and visionary admixture.

I inquisitively wonder at the samples I hear layered into their tracks that sound like ‘90s hip-hop or foreign lullabies. They starkly state those are all of their own making. In lark lilts, they state their music is “a thousand ideas and yet a very focused intention.” There is a moment of grace that feels like an invitation to be part of this era, the era of respecting history while creating your own and making a new wave. Wide-ranging references are filtered into a vernacular they share, gripped with sameness and oneness. The videos that accompany their songs have been carefully forged as part of the whole. I ask about the recurrence of staged scenes that depict them rescuing each other or being contained within a two-person costume. In a sober tone, they explain, “It is a constant exchange of rescuing each other and also a process inherent in the world. It is two people who interact, one person leading, a trading off, a push-pull.” The sullen surrealism and the electric love strokes in their music leave your bones feeling a buzz of wonder.

This article appears in TEETH Magazine’s The Devil’s Playground Issue.