How Did We Get Here? In conversation with Blu DeTiger 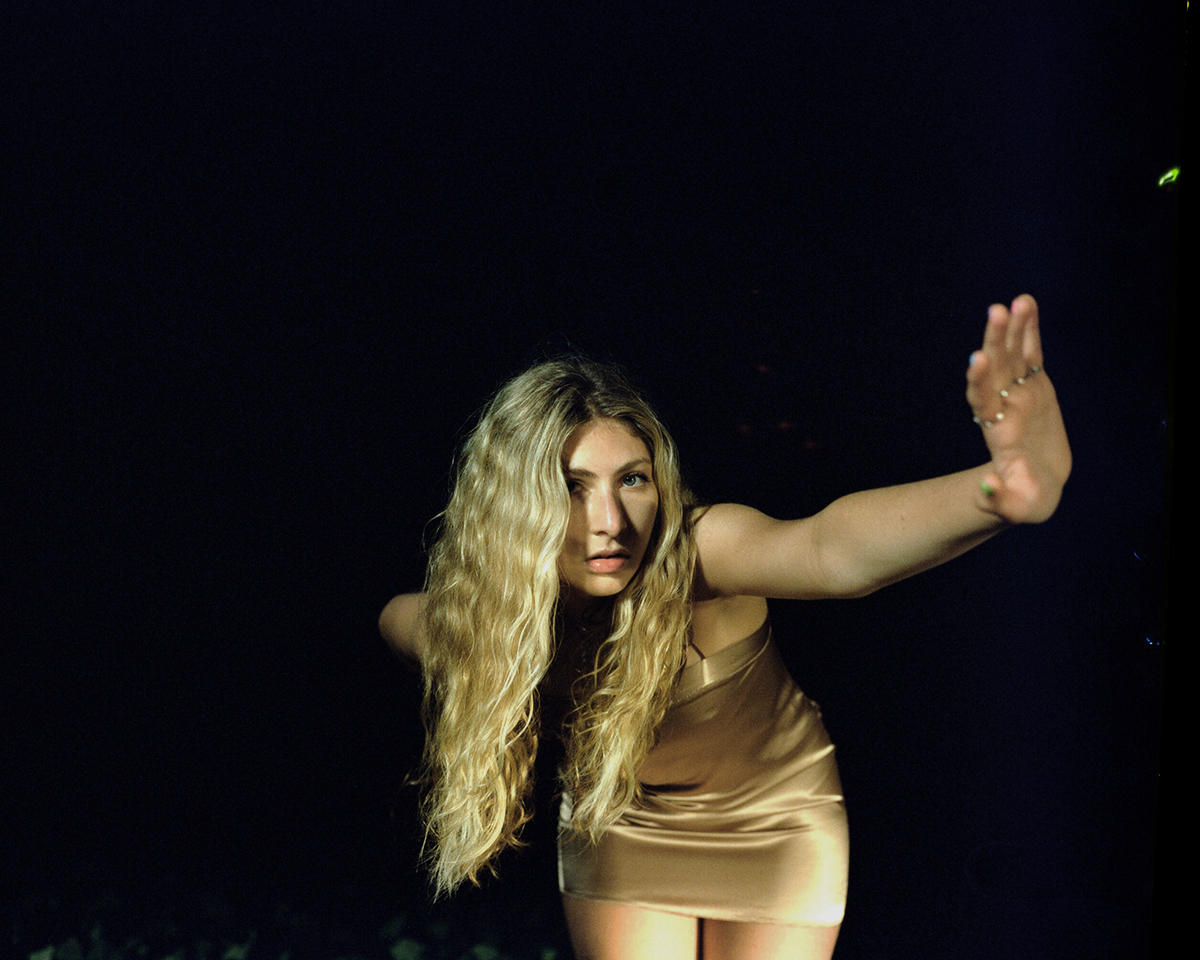 Imagine being able to perform at clubs in New York City before even being old enough to attend yourself. Having grown up in NYC, you may think Blu DeTiger ended up performing at such a young age because she had so much access. However, the bassist, singer, songwriter, producer, DJ, and performer could be defined as somewhat of a musical prodigy.

The proficient musician recently released her debut EP How Did We Get Here? which muses about the feelings many of us are familiar with after a year in isolation. DeTiger went into lockdown with a small following and came out with over 1M TikTok followers and counting. She’s garnering fans in high places, from the likes of Flea, Questlove, and Caroline Polachek, to name a few. Blu is one to watch, and speaking with her was like kicking it with a friend; she’s extremely personable, funny, and sweet, as well as being included in Fender’s ‘Up Next’ 2021 Global Artist Series.

After off-the-record discussions about the OG Gossip Girl versus the new one, it became clear DeTiger has both the raw talent and the hard-to-explain “it” factor of an artist that will no doubt become huge. New music is flowing out of her at record speed, and the world isn’t ready for what’s coming from Miss Blu. With the release of her EP and new projects on the horizon, Teeth chats with the young and tenacious artist on the rise. 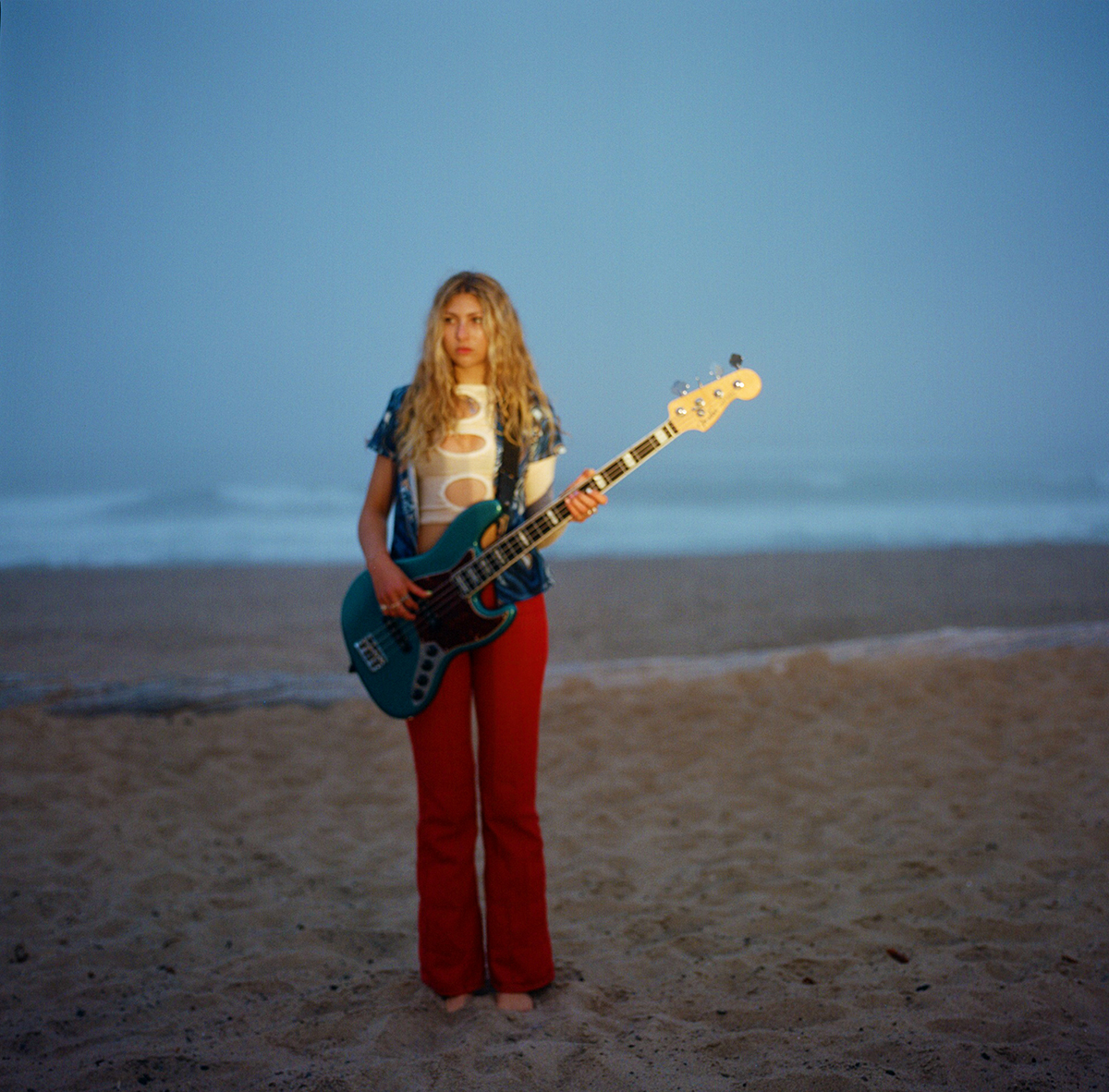 How are you today?

I’m good, very sweaty. Hot outside. Kinda tired; I had a big shoot yesterday, a bucket list kind of thing for me but it was a lot of work. It was a twelve-hour day, so I’m in chill mode today. Recovering.

How has it felt to release your debut EP, How Did We Get Here?

It feels amazing. It’s cool because I’ve had some time away from it now. It came out in March, now it’s July, so I’ve had a lot of time to reflect on that process. Now I’m making new stuff, and I’m definitely very proud of it. It’s cool, I still listen to a bunch of the songs, I’ll just pop ‘em on the aux and I’m like, These still hold up, these are sick. It’s a really good feeling to still like the music I put out. I’m really happy with how it all went and the support I got, it’s a good jumping-off point.

Is the new stuff evolving since your last project?

Totally. I’m just more confident in a lot of areas which just comes from experience, I’m more comfortable in my songwriting and in my voice. I’m dabbling into different areas that I wasn’t before, and kind of evolving in that way. Even sonically, it’s obviously a reflection of the current times. People are going out again and everything’s opening up, so I think that’s reflected in the music. It’s a little bit more upbeat, definitely more uplifting. I just wanna dance and rock out though I’m still building off of the themes that I was talking about in the first project. 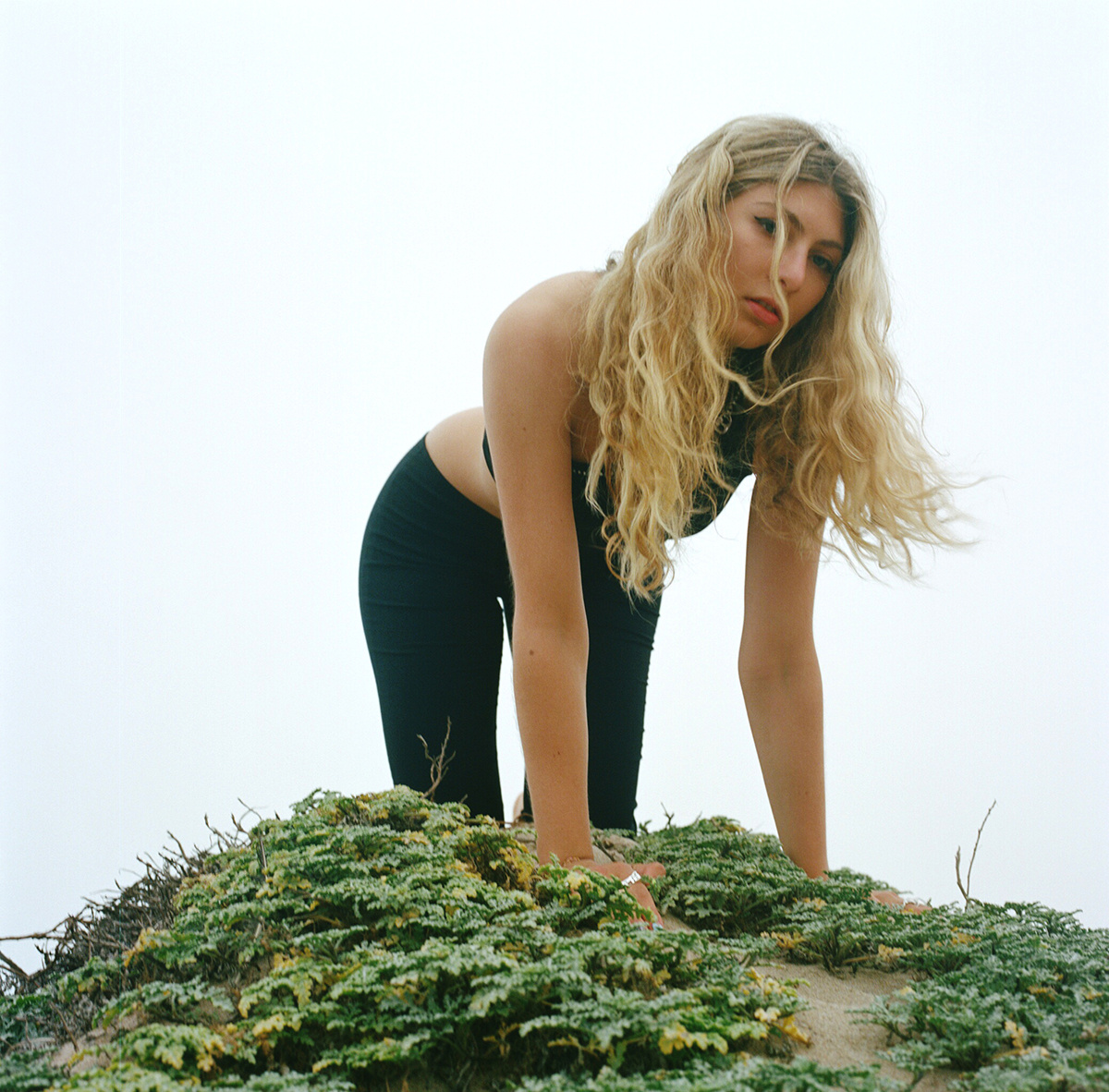 And what themes were those?

The EP had very much pandemic vibes. Not seeing anyone, loneliness, talking about how I missed the things before, which was very much a direct reflection of what was happening then. Now it’s like, okay, I’m ready to go do shit. Kind of the new wave, but building upon how the pandemic affected my mental state. It’s an evolution in that way, lyrically.

It’s not common for a solo artist to be primarily a bassist, and on top of that, you’re very young and you’re a woman – have you ever been afraid of these things holding you back in a male-dominated industry? Have others tried to not take you seriously?

They used to. I would deal with a lot of that. When that energy is out there, you start to believe it. When I was first starting to do my artist thing, people weren’t taking it seriously, and maybe I’m projecting, but I started to believe that. People would be like, ‘No one cares about the bass. Play for other artists.’ It’s sad to say, but I actually had to prove them wrong, get a million followers on TikTok, and actually get a lot of people supporting me because of my bass playing and my [musical] skills for people to be like okay, I get it. Which is kind of how it goes, as a girl you need to work extra hard for people to take you seriously in any field. I think it wasn’t until I really got the following and had a song pop off that people started to take me seriously.

No matter where you are, you can literally be Rihanna, and there’s still gonna be people – okay, maybe not Rihanna – but you could have the number one song in the world and people will still say shit. There’s still gonna be people that are trying to discredit what you’re doing. I think you have to just do your thing and do what you love. I was just like, I actually really like playing, that’s my passion. I’m just gonna put it out there, and the people that connect with it, connect with it. The people that don’t and the people that don’t get it, they don’t have to. I’m not gonna force anyone to understand it.

I think that’s a really mature and sure-of-yourself way to look at it. Because ultimately, the only thing you can control is yourself. If you put the work in, and you’re like like it or not…

Yeah, and I’d rather be happy and proud of what I’m doing than try to please other people and dumb it down to have them understand. I’m not going to turn into something I’m not and just sing some song. I’m gonna do what I do, and try to get it in front of people that are willing to listen, and hopefully, they convert to fans. I’m just gonna do my thing, and try to evolve as a person, as a musician, so we’ll see where the road goes. 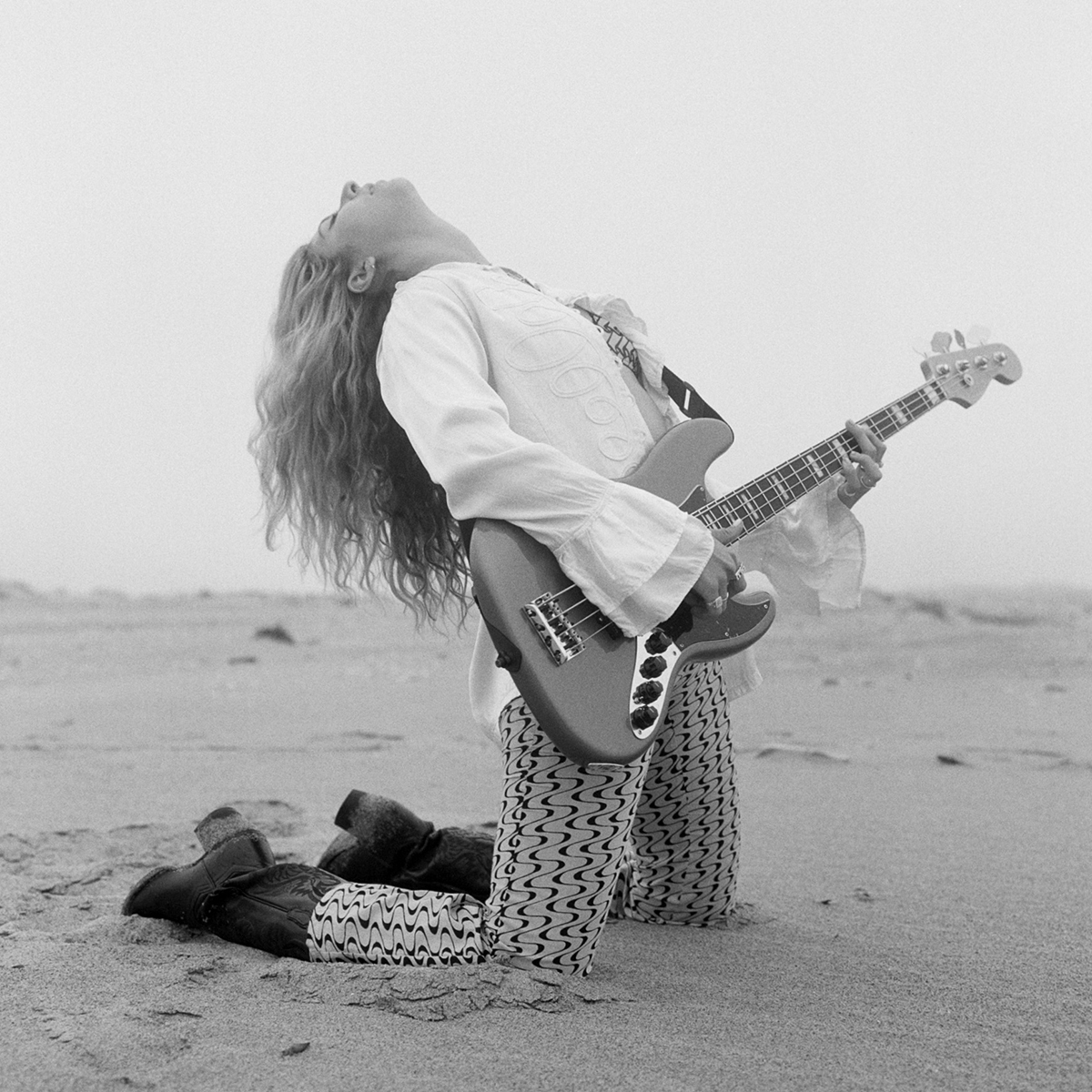 Who are some of your musical idols?

Prince, just like incredible. Probably the best on every instrument. David Bowie, I like all the classics. Debbie Harry of Blondie, also one of my style icons, she’s so cool. St. Vincent, Tina Weymouth from Tom Tom Club, and Talking Heads.

I really love the funk sound you get on your bass. What are some of your favorite funk music?

Chic, which is a little more disco. Nile Rodgers from Chic was some of the first disco music I heard where I was like, This bass playing is ridiculous, I wanna learn how to play like this. Those songs are always going to be ingrained in my head. Bernard Edwards on bass, probably one of my top favorite players of all time. Sly and the Family Stone, stuff like that. Even Zapp and Cameo, more like ’80s. Their funk stuff is really cool. Patrice Rushen, Mary Jane Girls, yeah, the list goes on…

What’s your favorite song to listen to before going out for the night?

I’m loving the new Doja Cat album. It’s so good. “Kiss Me More” is such a vibe. Also “Sweet Escape”, Gwen Stefani and Akon. CLASSIC smasher. I’ve been listening to that a lot these days. I would say those two back to back. 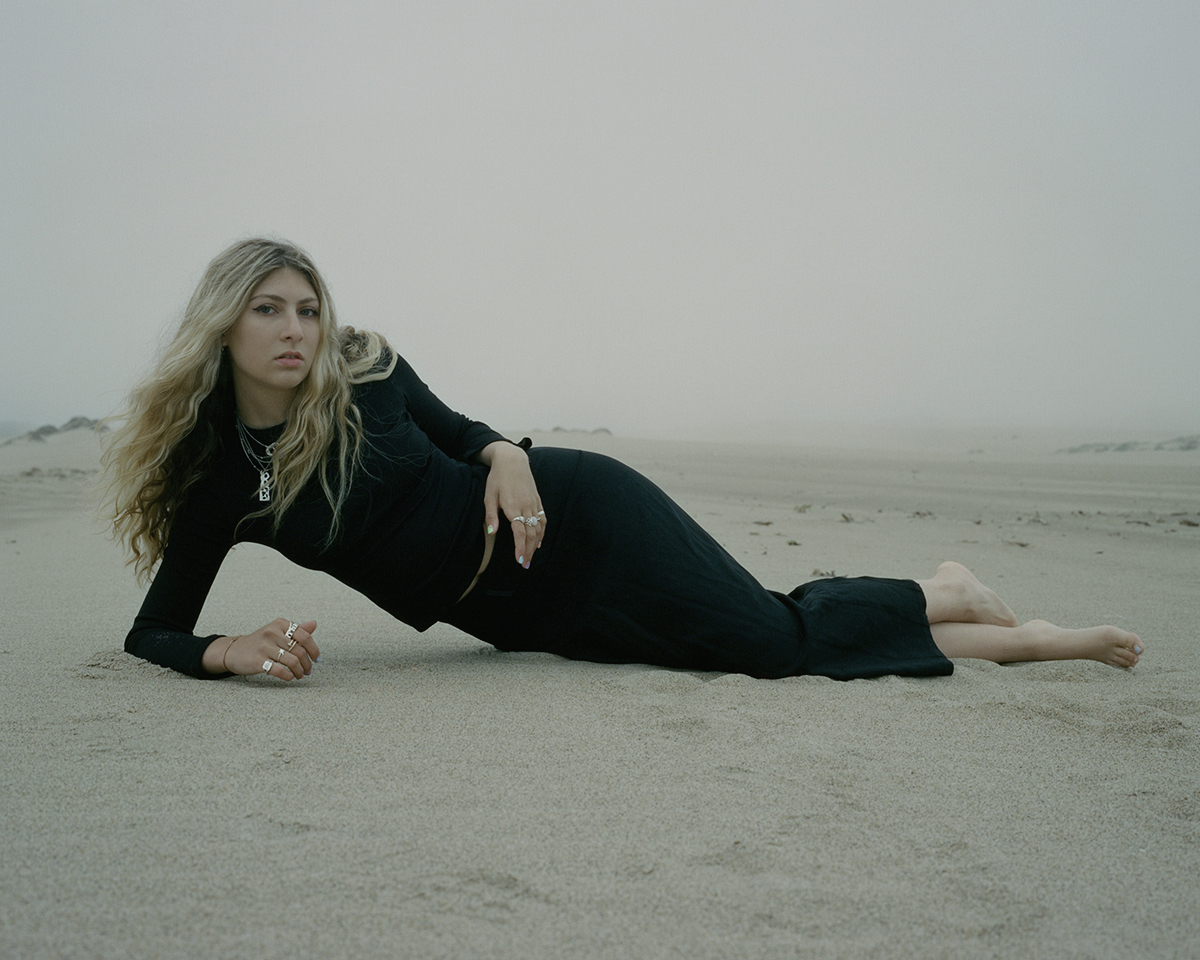 What would you say to young female artists and musicians who feel like it’s a man’s world?

Ooh, tough one. I would say there’s such a community of females in the industry coming together and supporting each other in a way they haven’t before. There’s hope. There are other people feeling the same way, which makes it a bit better. I think it’s slowly changing. Just keep doing what you love to do and focus on your passion and your connection to music, use that to fuel you, and use that to motivate you to get really good at what you do.

I was going to ask you more about your new material – is there anything more you’d like to say about it?

I’ve been writing a lot. I think I’ve written about 25-30 new songs in the past three months. I’m just grinding it out, which is necessary sometimes.

If that creativity is flowing out of you, you have to take advantage of it while it’s there.

Exactly. I’m working with different people and trying to find my crew of people that I trust, that get me, who I think can expand my project, and who I work well with. Which is hard, because I get along with people easily. I like everyone that I’ve worked with so far, which is a good thing, but also a bad thing because I don’t know who to lock in with. It’s been really cool, and all the songs kind of sound different in a really interesting way. I kind of like that. I’m just grinding it out and getting better as a songwriter and lyricist and singer and bass player and guitar player and everything. Just to grind it out, get better, go back in, and see which songs I like the best. That’s the wave I’m on right now. Basically practicing, writing, and seeing what I like. All the stuff is coming together really nicely, and I’m really excited! 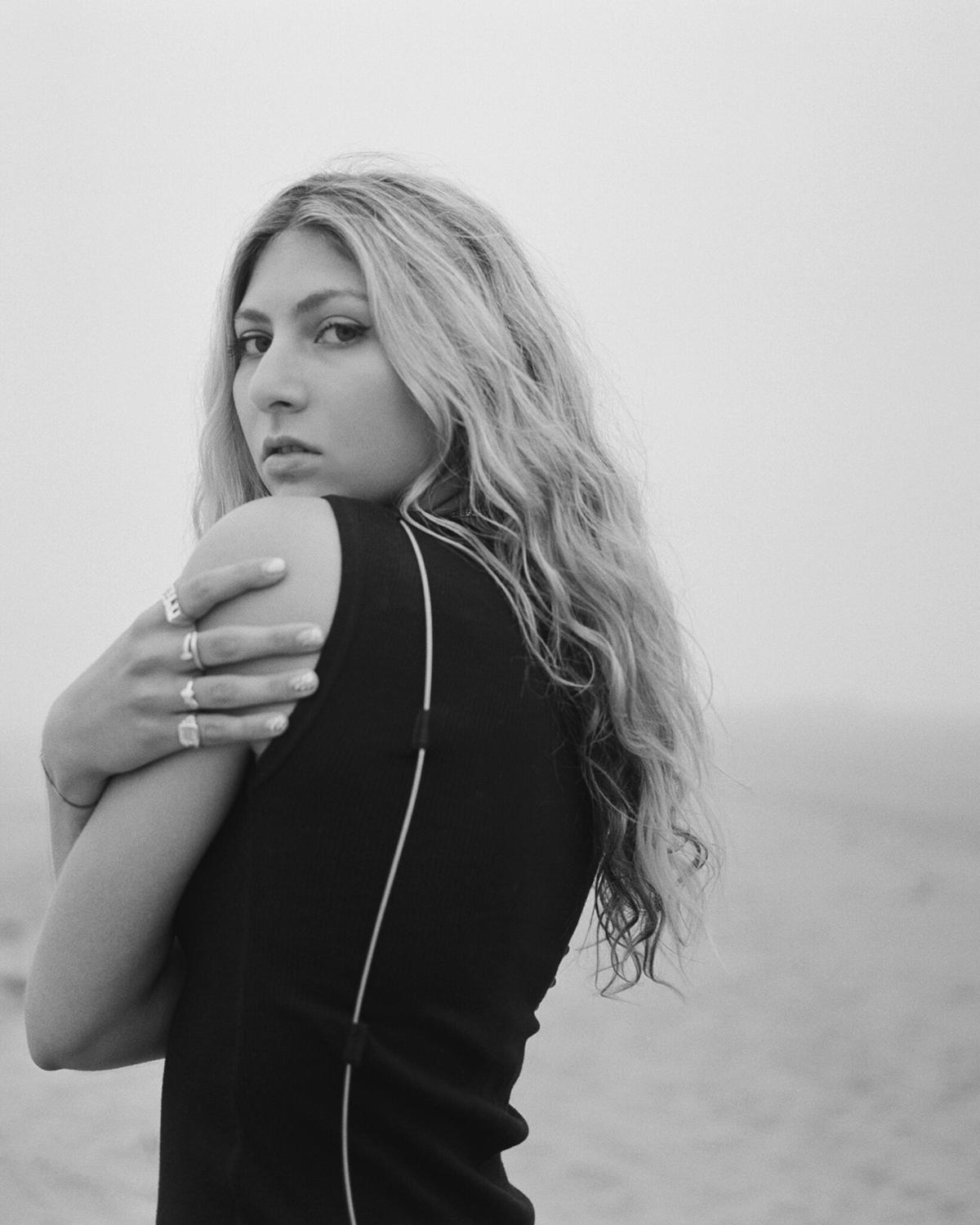 I’m excited! What can fans look forward to seeing from you in the near future?

I’m going on tour in September, I’m playing in New York, LA, Austin, Chicago, and then I’m doing a festival in Seattle and one in New Jersey. Those are all sold out except the show in Chicago, so if you’re in Chicago, go cop those tickets! If not, I’m sorry, I hope to see you next time!

It’s crazy, something I’ve been thinking about a lot – like, in New York, I’m playing at Music Hall of Williamsburg, and it just sold out a few days ago, which is a really big moment for me. Since I gained more fans during the pandemic, I haven’t played a headline show just for my music. I’ve played there before, but always for someone else’s project. The fact that I’m going on stage for the first time for 650 people in my hometown, is just an insane thought. It’s going to be crazy after not performing for two years, but I’m so stoked and honored.

During the pandemic, all you’re seeing is numbers. I’ll still be shocked if anyone recognizes me on the street. Someone will be like, ‘My sister is such a huge fan, she plays your music all the time.’ I’ll be like, What?! Really?! I just can’t believe it because I haven’t experienced it when all I’m seeing is my social media followers grow. I’m excited for the show to actually see these people who are behind the screen.

With the pandemic, it’s as if you woke up one day with a huge following and you haven’t been able to interact with that life change in the real world yet, I can imagine that would be crazy.

You can stream DeTiger’s EP, How Did We Get Here? below. Visit her website here and stay updated via Instagram here.

Blu DeTiger · How Did We Get Here?