Personal Space: an interview with David Eardley of Pink Essay

Pink Essay started as a moodboard—interesting design, usually objects, positioned in a way that drew the eye. Since then, founder David Eardley has spent much of his free time pouring over images of archival and contemporary furniture, interiors, architecture, and art installations, sharing it on his site and Instagram, and eventually garnering a growing following of contemporary designers and curators. His curatorial project blends classical work (think Gio Ponti and Eileen Gray) and contemporary stakeholders (Jessi Reaves and Thomas Barger).

Over the past months, Pink Essay has expanded to include interviews with a range of rising creatives, such as Green River Project LLC and Leah Ring, and launched as a monthly newsletter this past November at Alphabet City darling, ODD EYE. The publication takes a refreshingly DIY approach to publishing, including handwritten notes and illustrations, and shares interviews and features on new and established voices in design.

We caught up with David on the afternoon of the event to hear about the project and plans for the future. 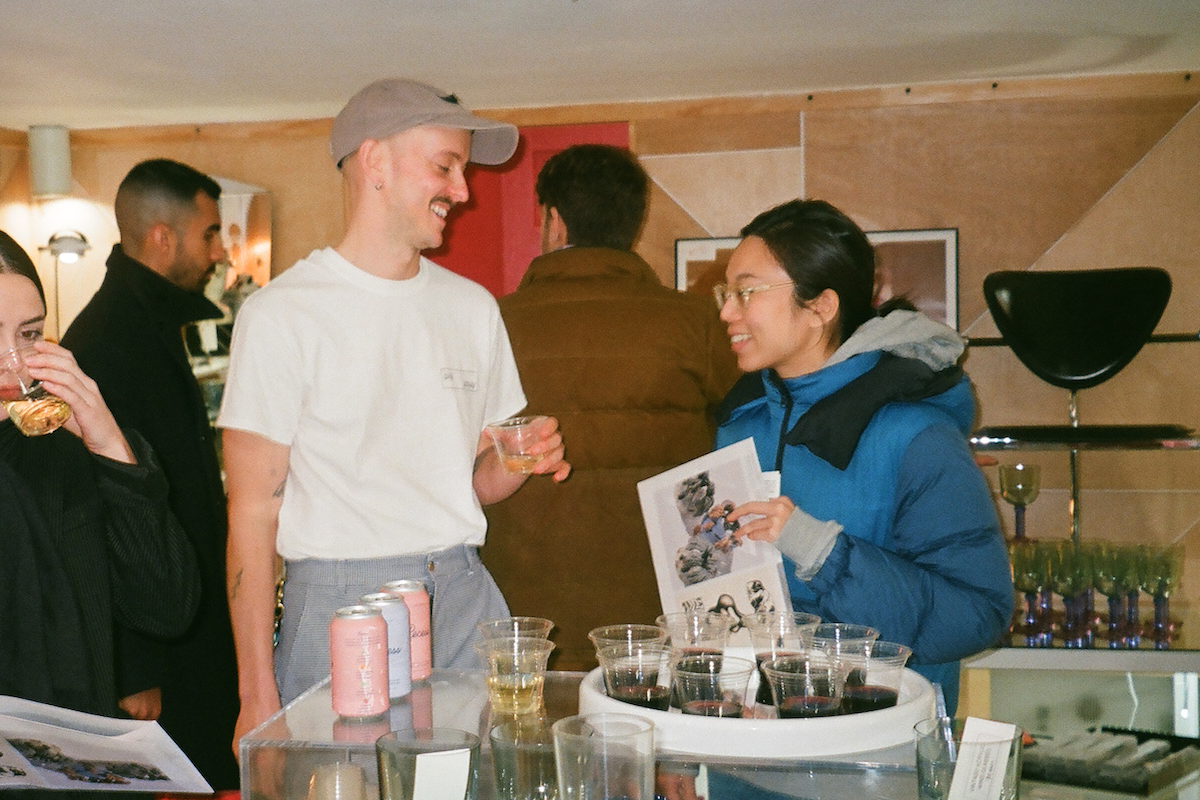 Lily Wan: Are we feeling celebratory?

David Eardley: Yeah! I’m feeling really excited about the newsletter—there have been a series of beautiful, natural steps that have happened with this project, and this feels like just another natural step, to take it a little bit offline. I’m happy that Pink Essay is an internet-based project because I think it makes it more accessible to people, but I am glad that it now can exist offline. Finding a way for print and digital to work together to present information is what’s going to make something both long-lasting and more interesting. I’m excited that I found a way to do that, that doesn’t seem like it’s just a copy of what I’m doing online, but rather a natural complement to it.

I’m happy that I get to share it with the people I love, and to celebrate different kinds of creators who are making really cool work—both that live here in the city and that are not here right now, but here in spirit, I guess! People who I think are doing things that are both new and also really personal. 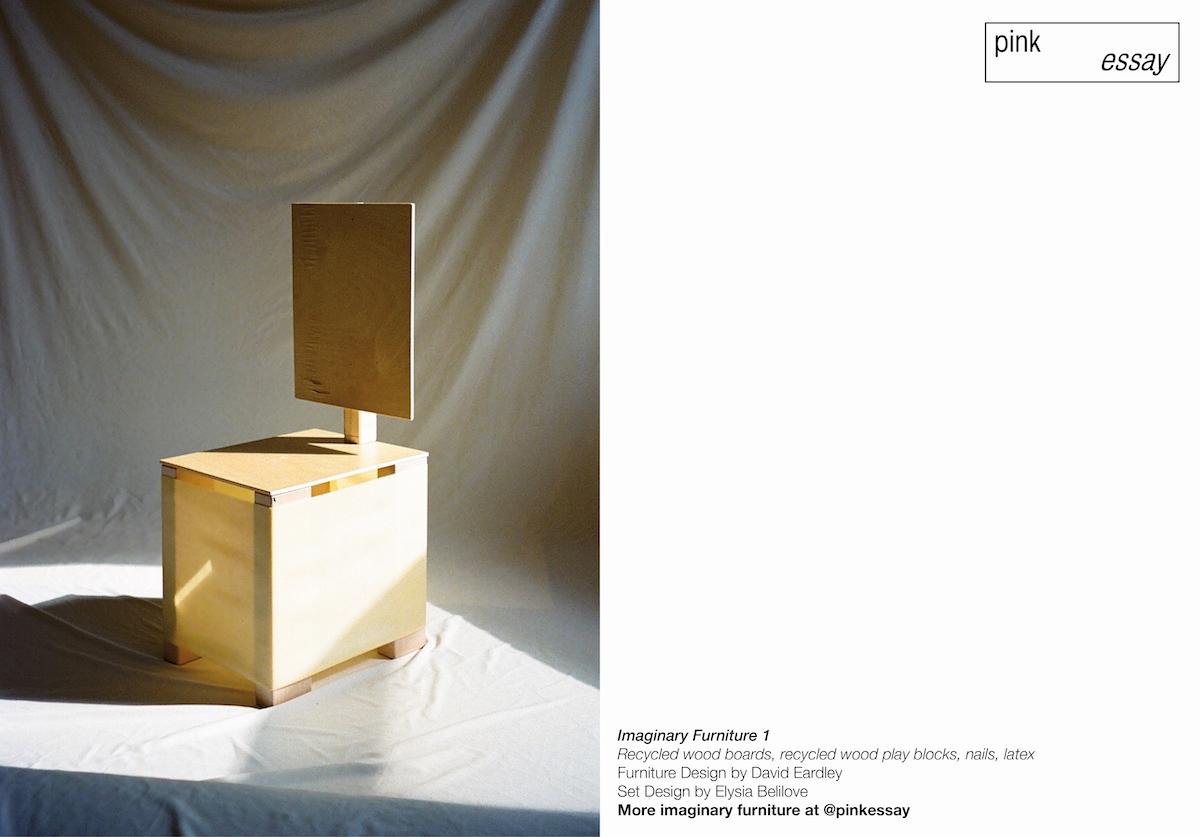 Is there something about New York as a city that you feel enables Pink Essay to come into being, but also enables it to come offline and into real life?

I think that New York is a city where the way that we interact with art and design has become so digital, but oftentimes that does lead to the in-person or offline—finding something we’re interested in on the internet and taking that to the street to go and seek that out in real-life spaces. There’s a community here of people who find it an important part of their free time, to seek out new creative stimulation. 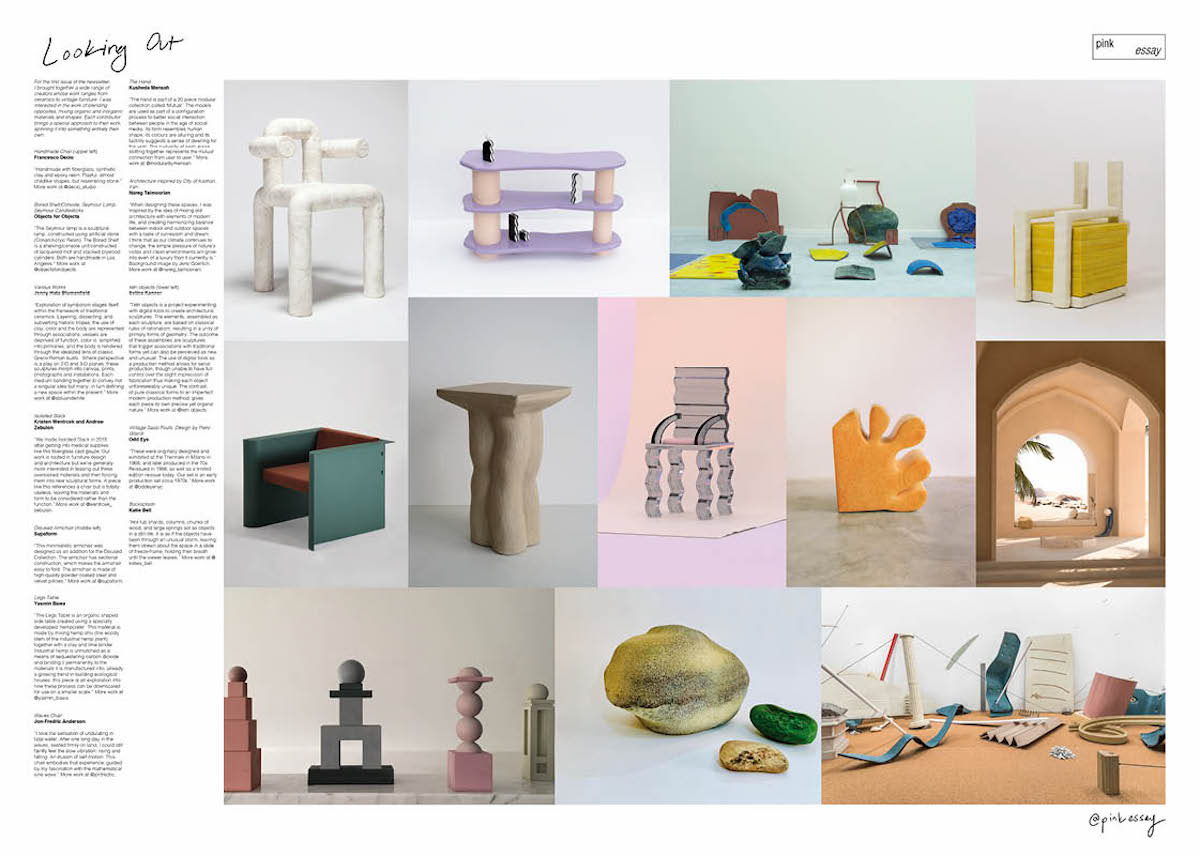 And how is Pink Essay different from other design and interiors platforms?

I think it’s really lighthearted! I think there are some different approaches happening right now. I think on one end you have the really hardcore, upscale luxury, glossy magazines, then on the other end, you have more millennial, colourful publications. But I think that within this world there’s room for people to find their own place, no matter their walk of life. I’m particularly interested in sharing work by women and nonbinary designers and artists, and designers and artists of colour. That’s something that’s really important to me and I do see that happening in some other publications, but I want to make it a priority and share more work by diverse creatives. 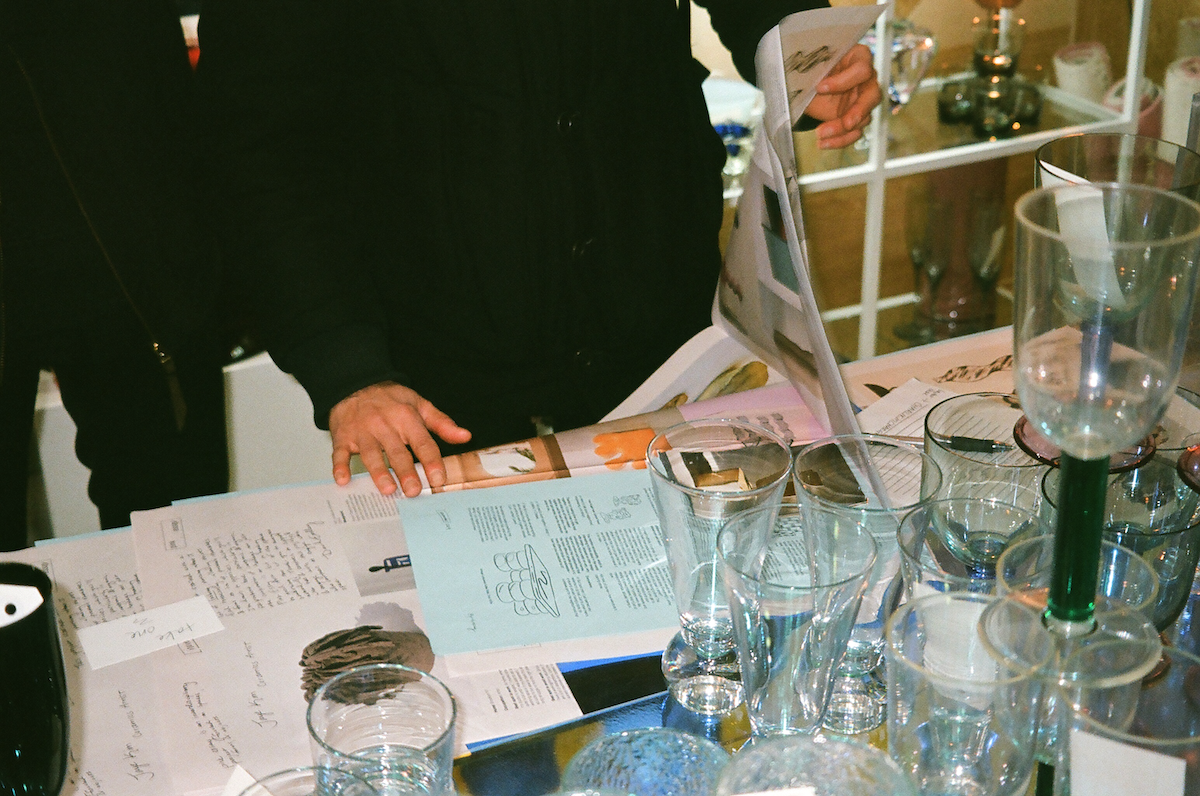 How would you describe the Pink Essay community as you’ve observed?

I think ‘community’ is a really important word to focus on because as I have worked on the project, people have been very interested in working together. Every person that I’ve been in contact with has said yes to collaborating and I think that’s great because the art and design world from afar can seem to be a bit inaccessible, but when you talk to these people who are working in this field, you find that everyone is actually sharing and it’s actually becoming less commercial and more about the community. 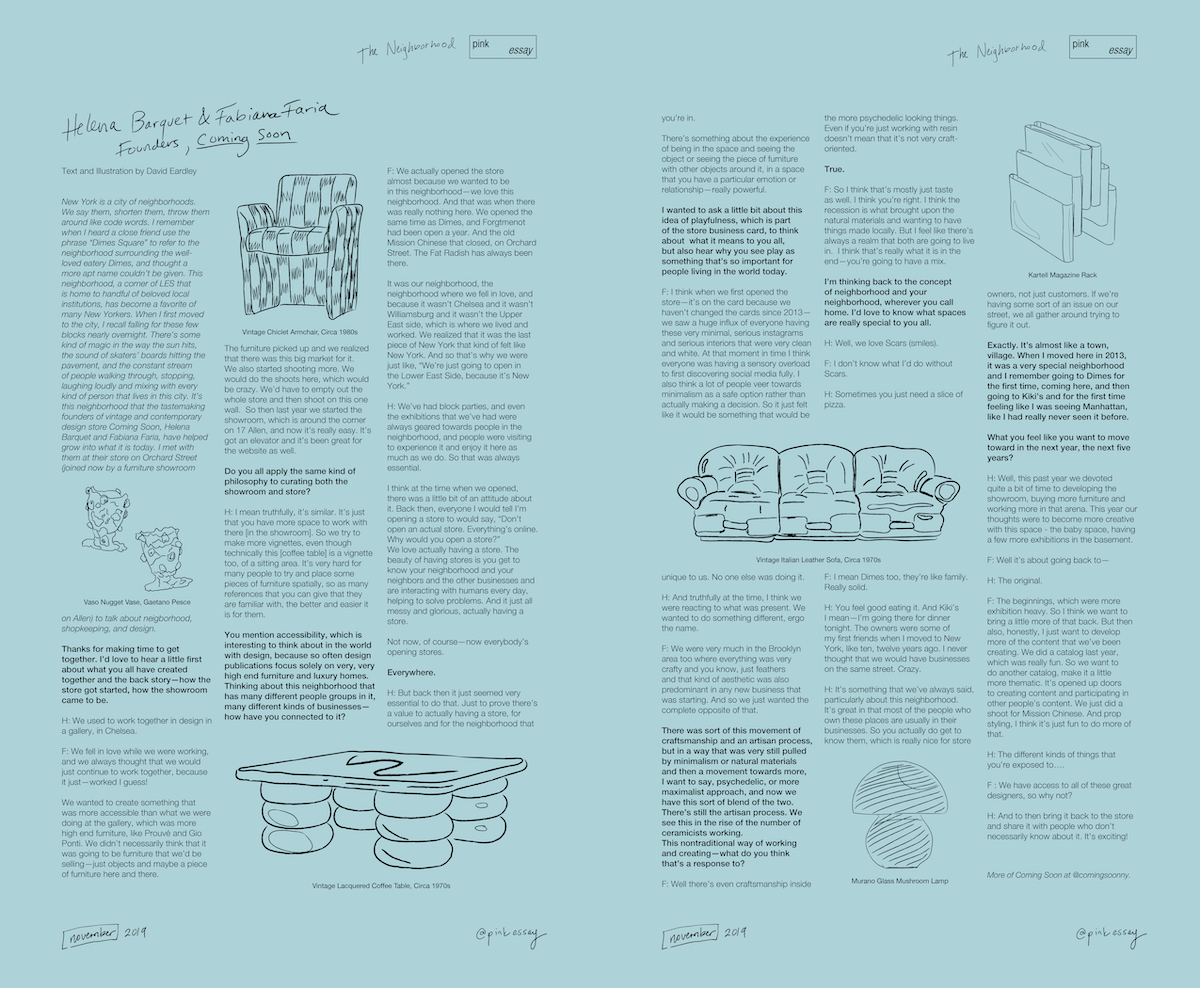 Great! Last question. What do you think the internet is doing to taste?

A lot of things. There’s the classic argument that it’s dumbing down taste. But I think that, if anything, it’s allowing creators who are making important work to more easily show it to a variety of people and removing a bit of a barrier to creatives of different socioeconomic backgrounds to have their work shown, to have people interact with it.

That elevates the taste, because when you have a greater variety of voices and variety of work being shown to a greater number of people then, naturally, people are diversifying their tastes and becoming more open-minded to different ways of thinking about these different subfields within art and design. 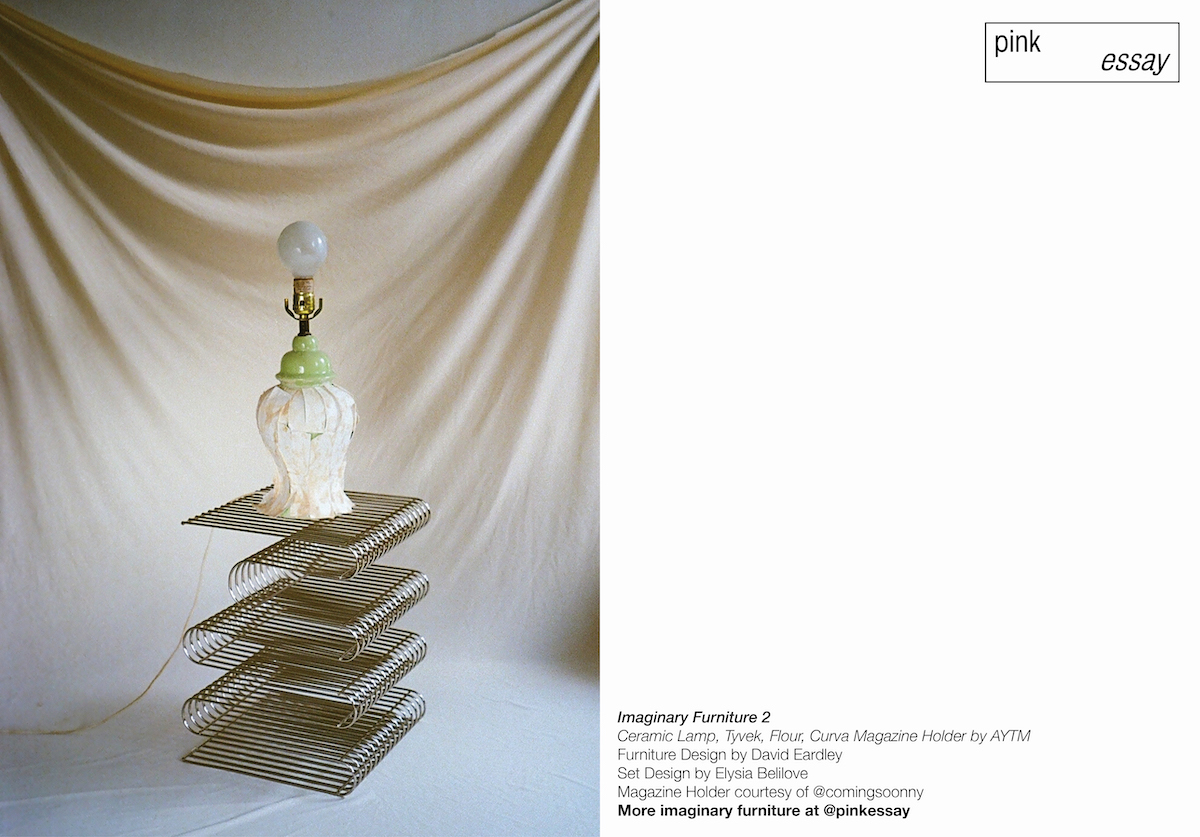 Great. Is there anything else?

I’m really excited! I think there’s a lot of next natural steps to this and I’m excited to work through and build onto this project.