Floating on a Subconscious Influx: an interview with painter Devin B. Johnson 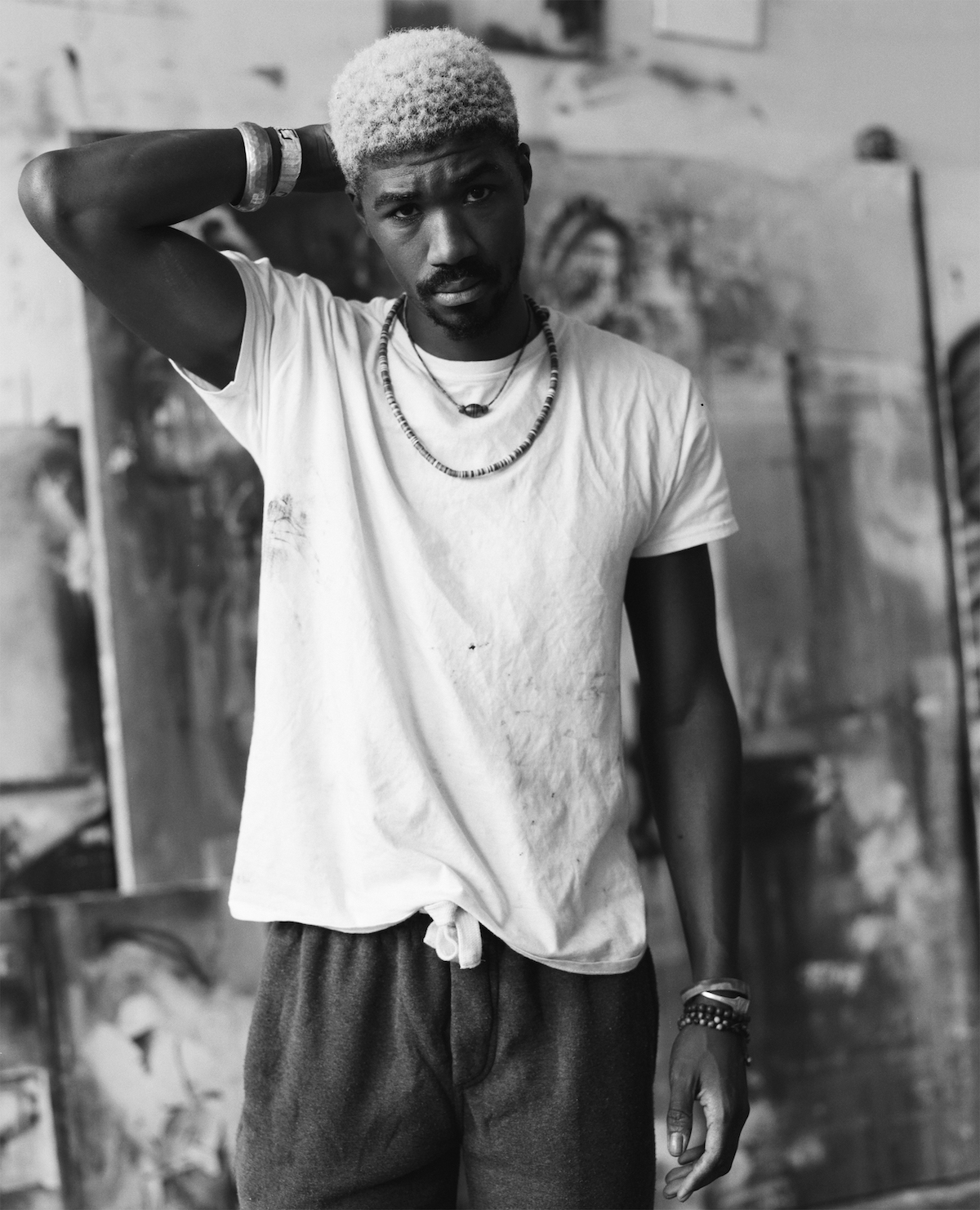 Devin B. Johnson is one of the bravest painters I’ve ever encountered. He’s not afraid to explore the unknown and he doesn’t shy from the process of trial and error. Being fearless as an artist is the biggest gift and something you can’t acquire, you’ve either got it or you don’t, and Devin’s got it – he’s the real deal.

In a scene full of repetitive conformist offerings, Devin shines. His paintings are reminiscent of the future; they hold history in them but at the same time are unusually ultramodern. With layers and layers of talent, his canvases are endless reflections of his storytelling. A master in the making.

In this exclusive interview, Teeth chats to Devin about his practice, his creative process of making his pieces, and his upcoming show. 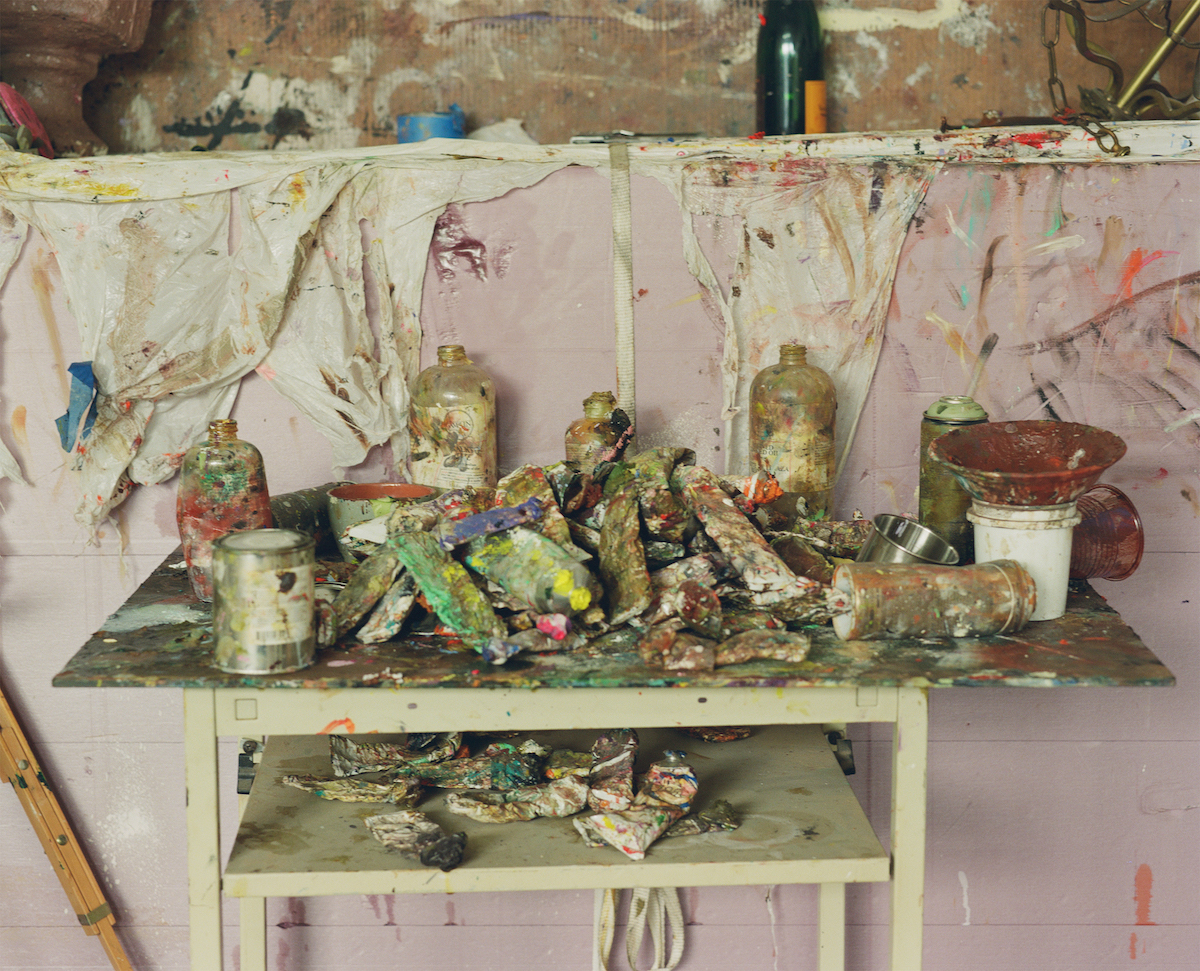 You grew up in California, how do you think that influenced your decision to become an artist and specifically a painter?

I was born in Redondo Beach, California but my informative years were spent in San Diego, California. I was always curious and playing around with crayons and Crayola watercolor sets but when I was about 8 or so I took my first art class at a studio for kids. My papa would take me there after school. That’s when I went from crayons and got introduced to other mediums such as watercolors, pastels, oil, and acrylic paint. When I was 10 years old, my family and I moved to the San Fernando Valley.

You chose to relocate yourself and your studio to New York, what is your relationship with the city?

I relocated to New York City to get my MFA at Pratt Institute, but I felt I had to leave Los Angeles because it wasn’t working for me there. I had to explore other avenues in other places to really challenge myself to step outside of my own comfort zone. I always had this question in the back of my mind, ‘if I can make it in New York then I can make it anywhere.’ 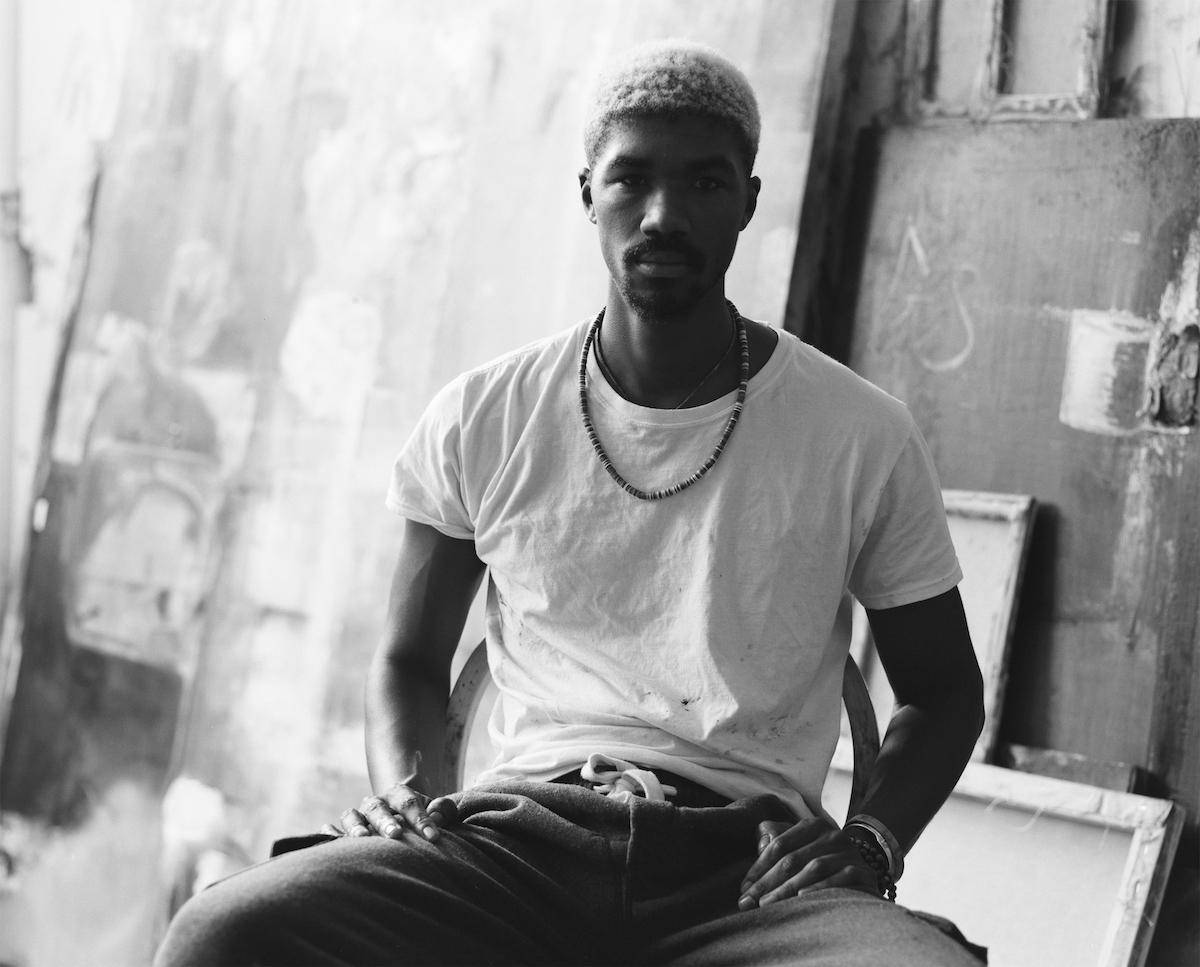 Do you feel like the physical space of your studio co-exists in perfect symbiosis with your creative process?

It morphed with me as I learned more and more about my practice. When I first moved into the studio the floors were a lot more clean I would say broke it in, haha. There’s a physical aspect to the way I work. I like to work on the floor so I can hover over the canvas with my body. Oftentimes, detritus or things lying around the studio enter the work.

I’ve noticed that some of your paintings seem to have layers and layers in them, it looks like there are endless coatings for the surface of the canvas, somehow it feels like they’re all aligned and telling one story. Is that the initial intention or does that evolve over the course of time working on a painting?

Yeah in the work I started thinking about time, memory, and the subconscious and how wrangling parts of the subconscious are intangible for us. I see New York as this liminal space that is constantly in flux and movement. You typically engage with the city through its surfaces and textures. I built up a haptic sensibility to those qualities of paint handling. 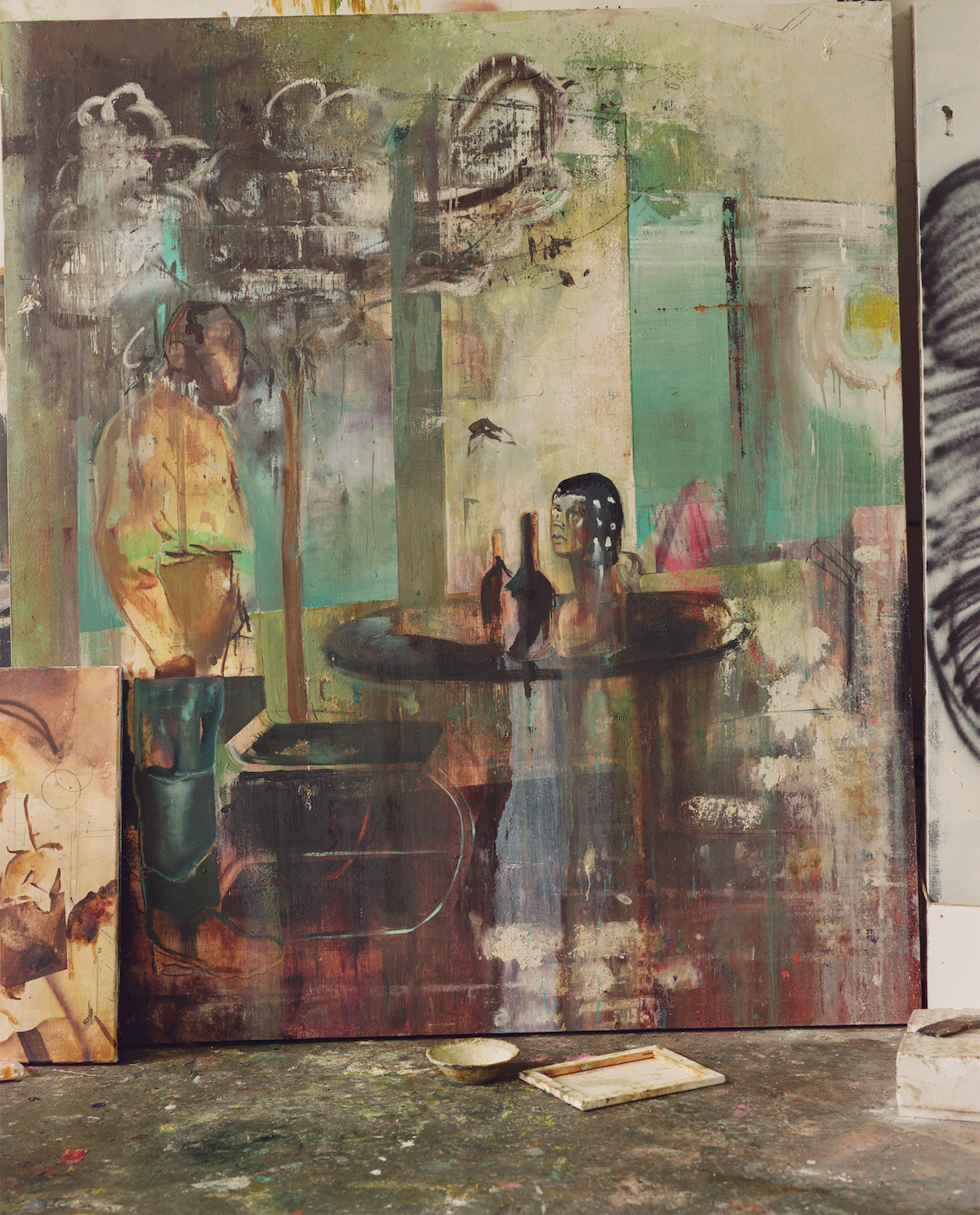 You work with oils primarily, but also combine sculpture, sound, and other mediums. What methods are you most comfortable in and do you like to get outside of your comfort zone?

I like the feel of oil paint. I found ways to extend and manipulate oil to achieve certain things. The acceptance of dry time allows me to approach layers as a set of iterations. I like to also confuse myself or sabotage parts of paintings to challenge my way of critical thinking. Mixed media collage shows up as well. I began using my ashtray to make these ashtray watercolor drawings. I approached every painting as a chance to learn something new. I hope to build a cohesive relationship between sound, sculpture, and paintings.

A lot of your paintings are takes on portraiture work, where are your ideas for new work coming from? What inspires you and how do you translate it to a tangible result?

A lot of the work was dealing with this interiority and exteriority. Almost like an overlay as to what is happening inside, happens outside. My process has been dedicated to this kind of mining, I strive to achieve an in-between of that visual phenomenon. I take pictures of things and surfaces from my walks from my apartment in New York City to my studio. I’m often sourcing images from my walks, things on the Internet, social media, screenshots from music videos, album covers, etc… and interior design magazines sometimes come in the source material. The amalgam of different images ends up getting dumped into Photoshop to where I slice up parts of multiple photos and make new references based on those photos. Though the reference starts digital, I welcome how the hand fails. I paint to achieve the right feeling.

I like to think I was making compositions that serve as almost being biographical but in an indirect sense. That metaphorically these paintings serve as totems for memories and people in my life. Maybe I’m extending these memories into a different realm. 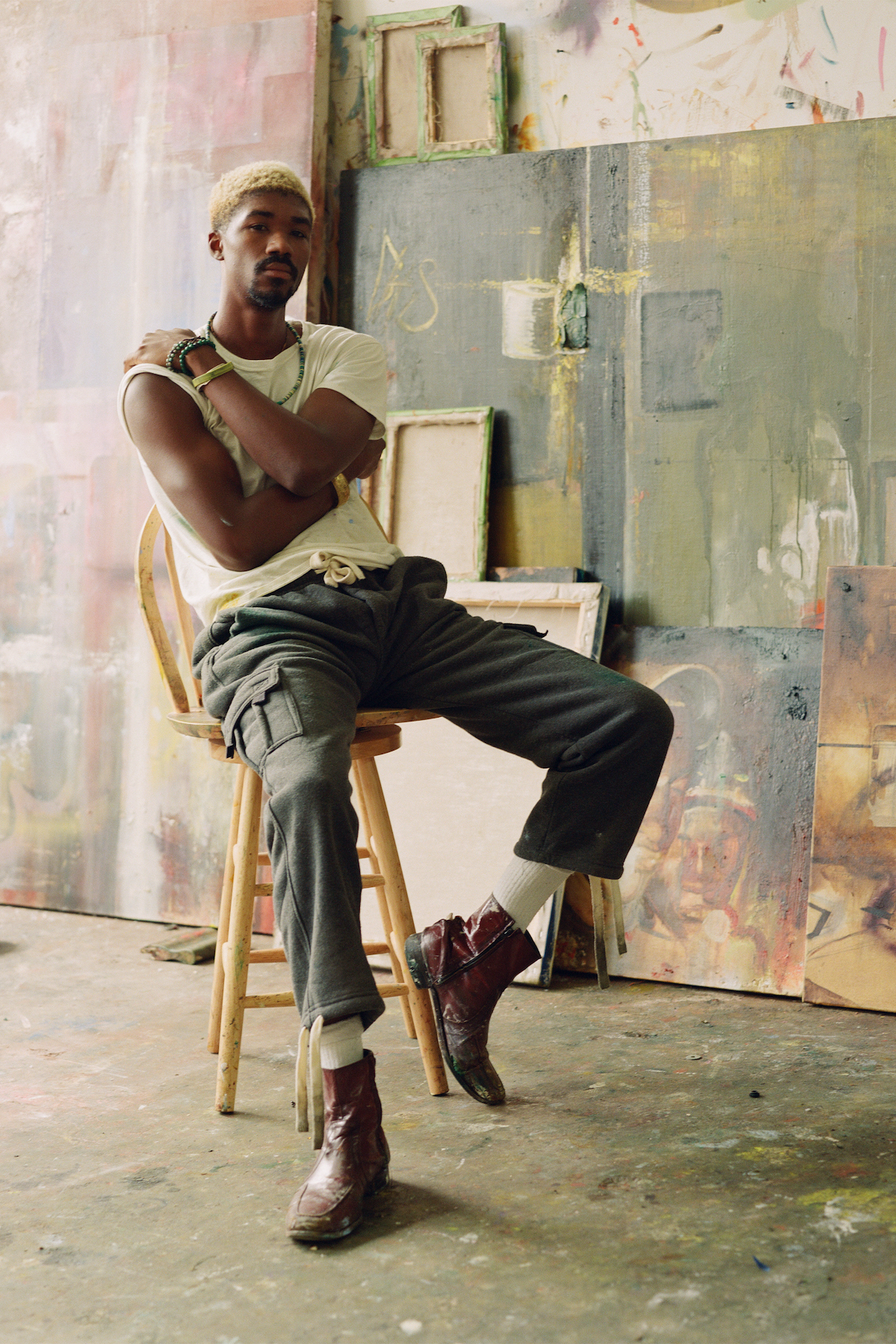 You have a variety of canvases – some huge and some a little more compact. What terminates the size and scale of a painting you’re about to start on?

It took me a while to get used to painting on a large scale, I had been accustomed to making works that could be done in my small studio at home but now, I was curious to see how my painting would translate at body scale. I’m looking for a balance out of confusion. Sometimes the idea works better in smaller paintings than in others.

Who are some people that impacted your work as a painter?  Who are some of your contemporaries that you value and respect?

This year my studio mate, Jake Mason-Macklin and I would take occasional trips up to the MET and we would go back to the basics such as the post-impressionists like Edouard Vuillard, Pierre Bonnard. Monet’s “Rouen Cathedral” series are some of my favorite paintings. Some of my favorite artists aren’t painters at all. I can name a handful of names, I have a lot of favorites that I respect. 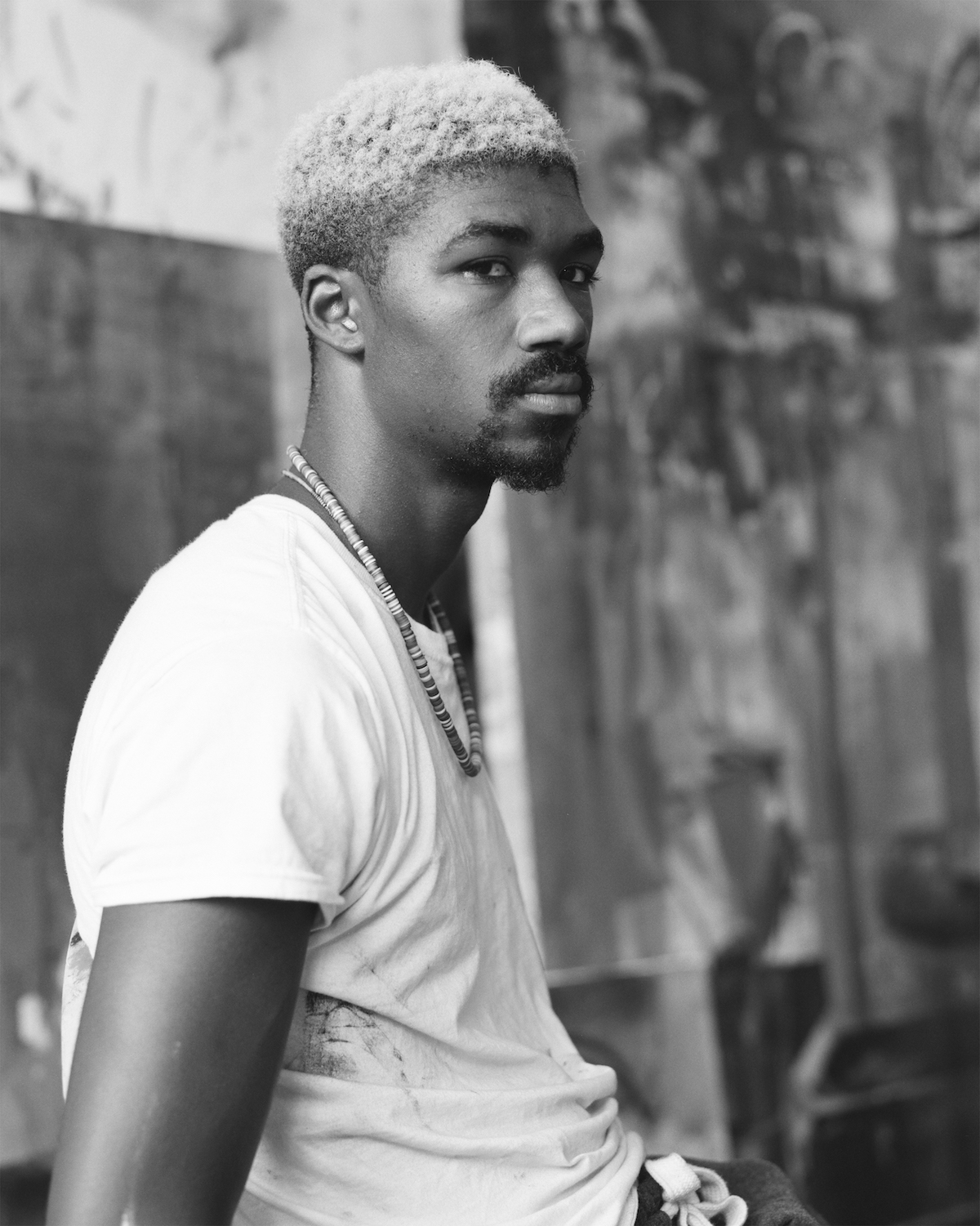 You went on a residency in Senegal – what was that experience like? How was it working in a remote location, away from your studio and your accustomed regime?

It was supposed to be a two-month residency from March to April but we were at the beginning of the pandemic. I came back in July. However, in between that time of going through the social upheaval and just not knowing what was happening in the world, I couldn’t necessarily focus on making work. I took my time and would go into the studio periodically. I was living out of such a beautiful place that was Black Rock Senegal. The residency had accommodated the needs of the other artist living there throughout the lockdown.

What is next for you? Any shows coming up? New projects?

Yes, I’ve been plugging away most of this year for this new show that I have opening up at Nicodim Gallery. It’s in their space in Los Angeles the show opens on September 8th. I believe that this work is a step forward in the direction in which I see myself mining some. These works feel honest and I’m ready to show everyone what I’ve been working on.

Stay up to date with Devin B. Johnson’s work through his website and Instagram. You can also check out his upcoming exhibit at Nicodim Gallery in Los Angeles starting September 8th.