In Her Element: A conversation with artist Pia Camil 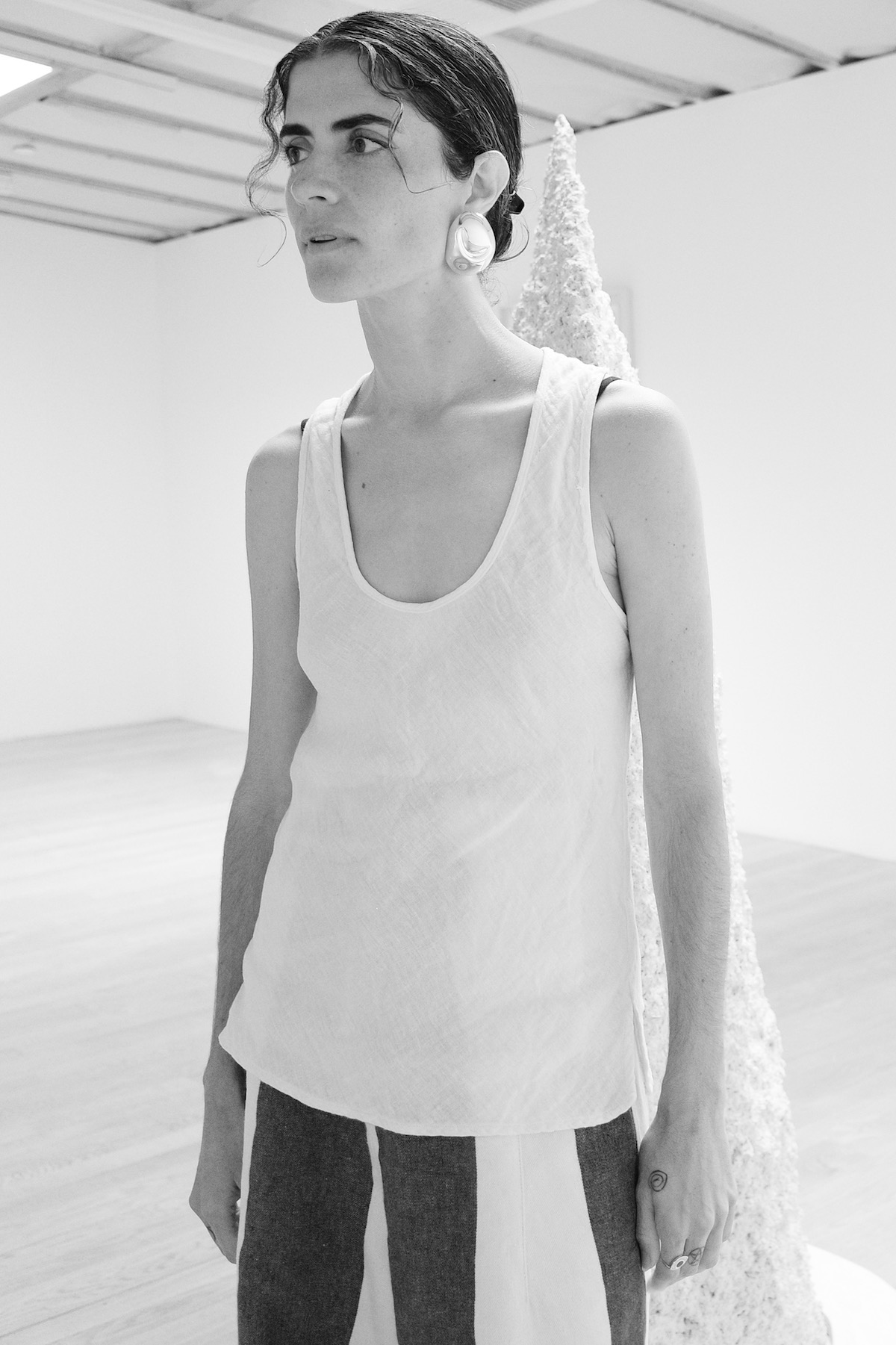 Meeting up with Pia Camil I couldn’t help but notice, or more accurately be struck by, her energy. On one hand, she is very welcoming, down-to-earth, kind, and honest, and on the other hand, fierce, yes fierce. I didn’t think I’d ever use that word but that’s the only word that can describe Pia.

Born and raised in Mexico City, Pia has effortlessly conquered the art world with her phenomenal art pieces. Whether it is the gigantic curtains made out of used t-shirts she has created with local Mexican seamstresses as a response to mass production, or her sculptures that are a homage to the magnetic mounds, and are currently on view at Blum & Poe Gallery in Los Angeles.

It seems like everything Pia creates is in some way or another an ode to relationships. Fundamentally with nature, followed by her unique choice of materials, and lastly her collaboration with other creators. On the eve of her show opening in LA, Teeth chats to Pia about creating these sculptural pieces, the disconnect prompted by the digital age, and shifting her focus to what really matters. 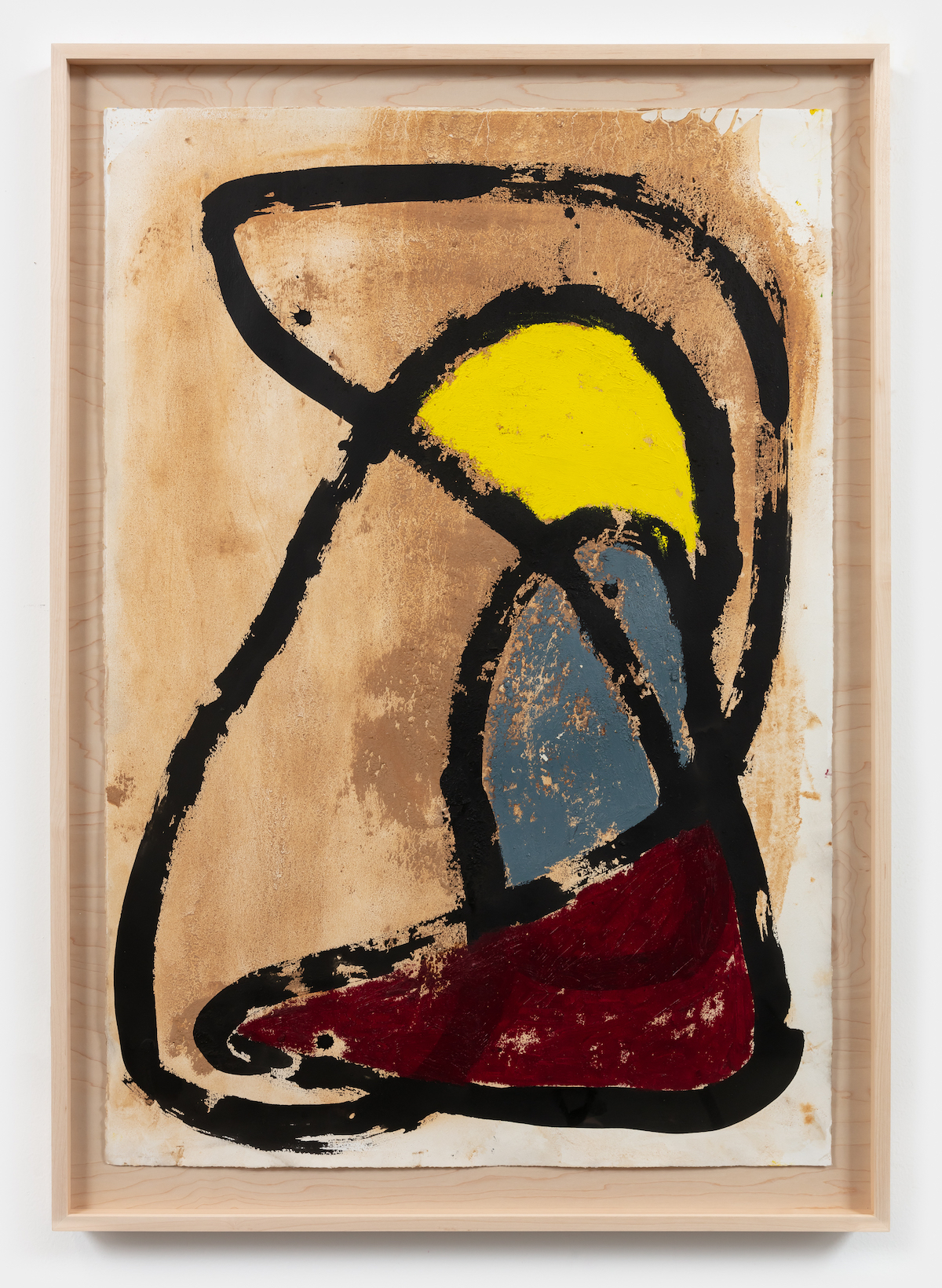 You were born and raised in Mexico City, how has growing up in this particular environment helped to shape you as an artist?

I think it enabled me to navigate a big city with fluidity. Mexico City can be chaotic and very intense but I found that I can easily transit all sorts of places. I think I got that from my mom.  She was a single mom and I remember spending lots of time with her in the car going places to pick up stuff or get parts to fix things at home. A big part of my art-making has to do with that mobility, as well as making significant relations with my collaborators in all parts of the city like the group of seamstresses in Iztapalapa, the vendors in La Merced, or the dyeing studio in Ecatepec.

You’ve recently moved to a new studio in the rural countryside. How have the new surroundings affected your work knowing that Mexico City has played a major role in your previous work?

I guess I always fantasized about having a studio in an isolated place in nature. It took me 3 months to build my studio with the help of Ivan Hernandez, a local architect. It’s a wooden construction in the woods designed to be disassembled and have as low of an impact on the land as possible. Working there every day is a real treat. But once the romanticism of the countryside wore down the learning process started. I realized I didn’t have everything at the tips of my fingers like I did when I was living in the city. We have regular power shortages, the internet is not that great, and outsourcing materials is not easy. But that is a good thing! It has given me a different sense of time and opened other possibilities. For the “Nidos y Nudos” show I relied on the city to do some stuff like the metalwork on the sculptures. It’s only an hour and a half drive so I still have the best of both worlds. 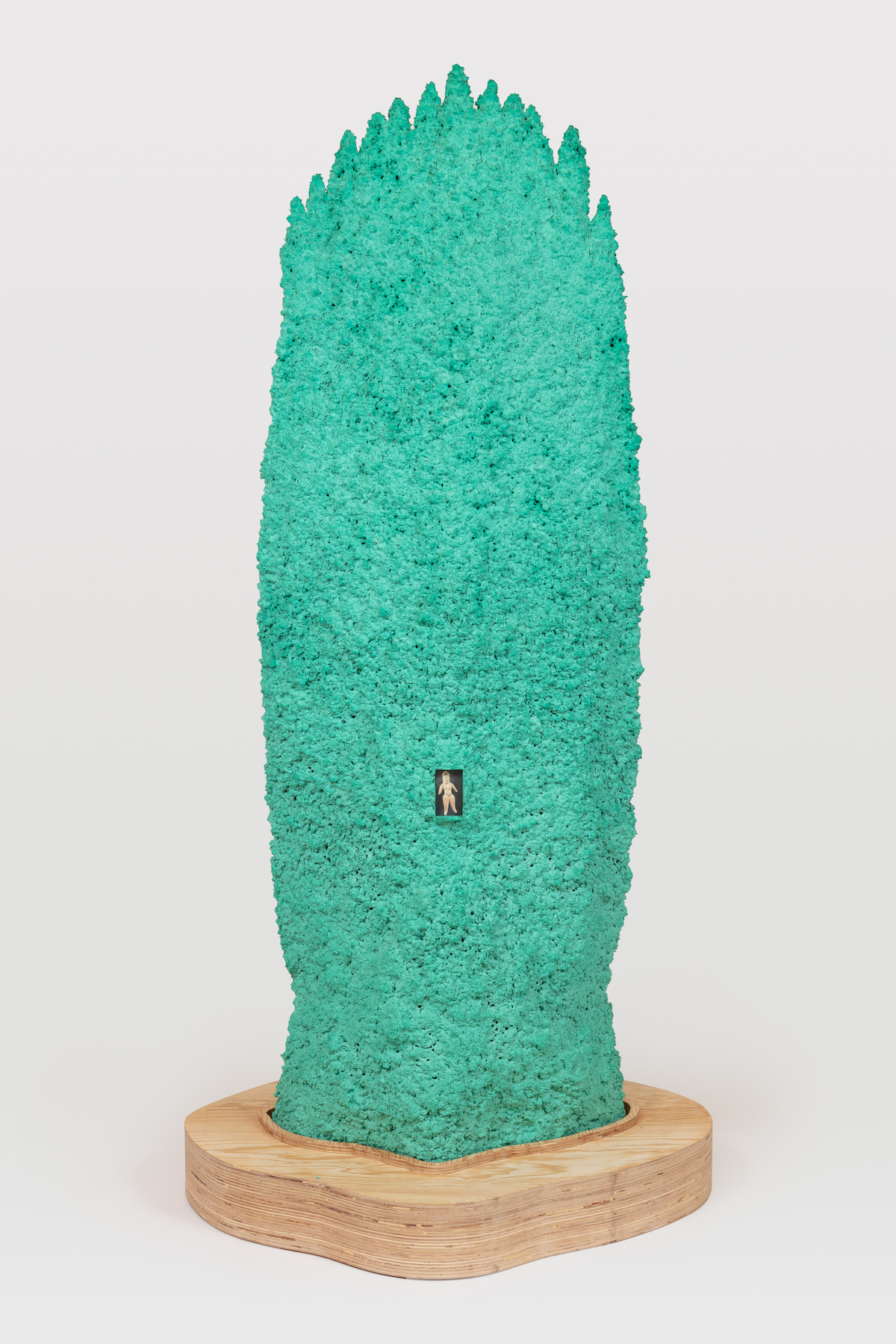 In your current show “Nidos y Nudos / Nests & Knots”, you’ve created these human-sized meticulous sculptures with totem-like forms of concrete and recycled newspaper that reminded me of a cross between ceremonially preserved objects and ocean rocks. You’ve also enhanced a strong feeling as if those sculptures contain some spiritual cryptic message… that’s how I felt when I was in their presence. What was your intention with these sculptures? How was the process of making them?

I am still trying to make sense of the works but they came from spending a year observing nature. First, by going to a beach in the Pacific where I camp for long periods with my partner and kids. That’s where I first encountered the termite nests on the trees. It’s funny you mention the rocks because there are some incredible rock formations there as well. My first sculpture was on a tree near my studio. I thought I wanted to make a bunch of those and document them.  Have the show be in the forest. But I scratched that idea too soon. I may still do it. The self-standing ones are based on the magnetic mounds in places like Africa and Australia.

There will be a screening at Blum and Poe gallery on July 31st of 3 films that are somewhat instrumental to the making of my works: Phase IV (1974), Mysterious Castles of Clay (1978), and Donna Haraway’s Storytelling for Earthly Survival (2016).  All of them touch on the importance of collectivity, using nature as an example among other things. I think that is what is at the core of these works. The actual making of the work was a very intense learning process.  I learned a lot from Daniel Uranga (architect) and Isaac Contreras (artist), two friends that worked in the production. They moved from Mexico City to the country and we spent a lot of time outdoors trying different formulas and failing most of the time. Also, the elements would play an important role. Halfway through the production, it rained every day so we cramped everything into my little studio. I usually get a thrill from not knowing what the hell we are doing.

You used to host a feminist and queer night of performances and dancing at your old studio in Mexico City, which was a safe inclusive place for many to enjoy celebrate and explore. How did it directly manifest and translate into your work?

Yeah, that was fun. When I first moved to that space in 2019 I soon found out it used to be a popular restaurant in the 40s and 50s called El Cisne that hosted live music. An important group of experimental queer poets like Salvador Novo used to frequent it. The space had a stage and it was a pity not to use it, so together with my friend PJ, we decided to host cabaret nights. PJ has lots of friends from the queer and trans nightlife. He’s been documenting their portraits for a while so we thought we would mix that world as well as invite friends from the art scene to do poetry readings, scenery design, intermixed with lip-sync shows, pole dancing, striptease, etc. I have always insisted on collaborations in my work. I think most of what I do is about making connections with different communities and try to weave seemingly unrelated things. 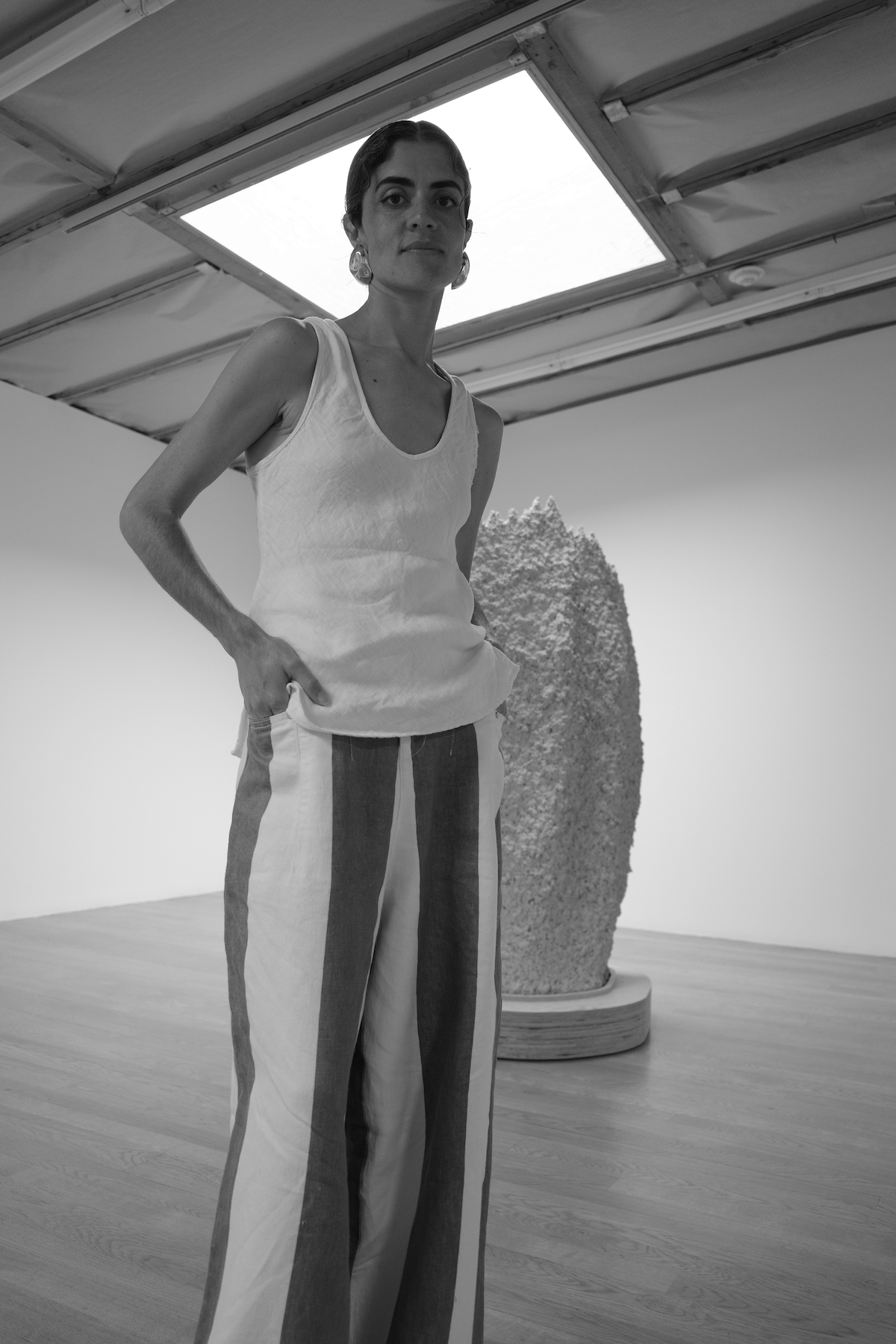 How has motherhood shaped your work since you’ve had your kids? Has it been easy to keep your individuality and your routine or was everything completely transformed for you?

The individuality thing is a totally abstract concept for me. Unfortunately, we have given it too much importance as a society the sooner we learn to understand ourselves as collective creatures, the better. Society would be more tolerant, plus we wouldn’t be in the environmental mess we are in today. I think there are a lot of misconceptions tied to motherhood and career, like the fact that as women artists we have to choose between motherhood and our career. I think we need to look at other fields of work and life experiences, not just the art world. I grew up with a single working mom, she worked as a secretary and managed to keep up with me and my brother and all the house chores. And so many other women don’t really have a choice, they just do it. So we should learn from them. If anything, my kids catapulted my career. I got better at managing my time and focusing on what really matters. And yes, it gets crazy and messy sometimes but that’s good, I guess…

You are known for not being overly precious about your work, allowing the audience to interact with your work in the space, and accepting the fluidity of that interaction. You’ve also mentioned in the past that you are interested in the deconstruction of items and scenes and that rebellious approach all-around, can you please tell me more about that?

I usually dislike sterile environments for art viewing. So part of the interest to involve the public comes from that. Also, I guess it comes from learning from art history and responding to artists’ initiatives like the situationists, neo concretes, land artists, I don’t know…I guess I’m attracted to people who think outside the box and offer different experiences of art viewing and making. With the advent of the digital world and social networking, it’s easy to feel disconnected. I have found that engaging with the public is a simple but powerful way to counteract the accelerated capitalist world we inhabit. 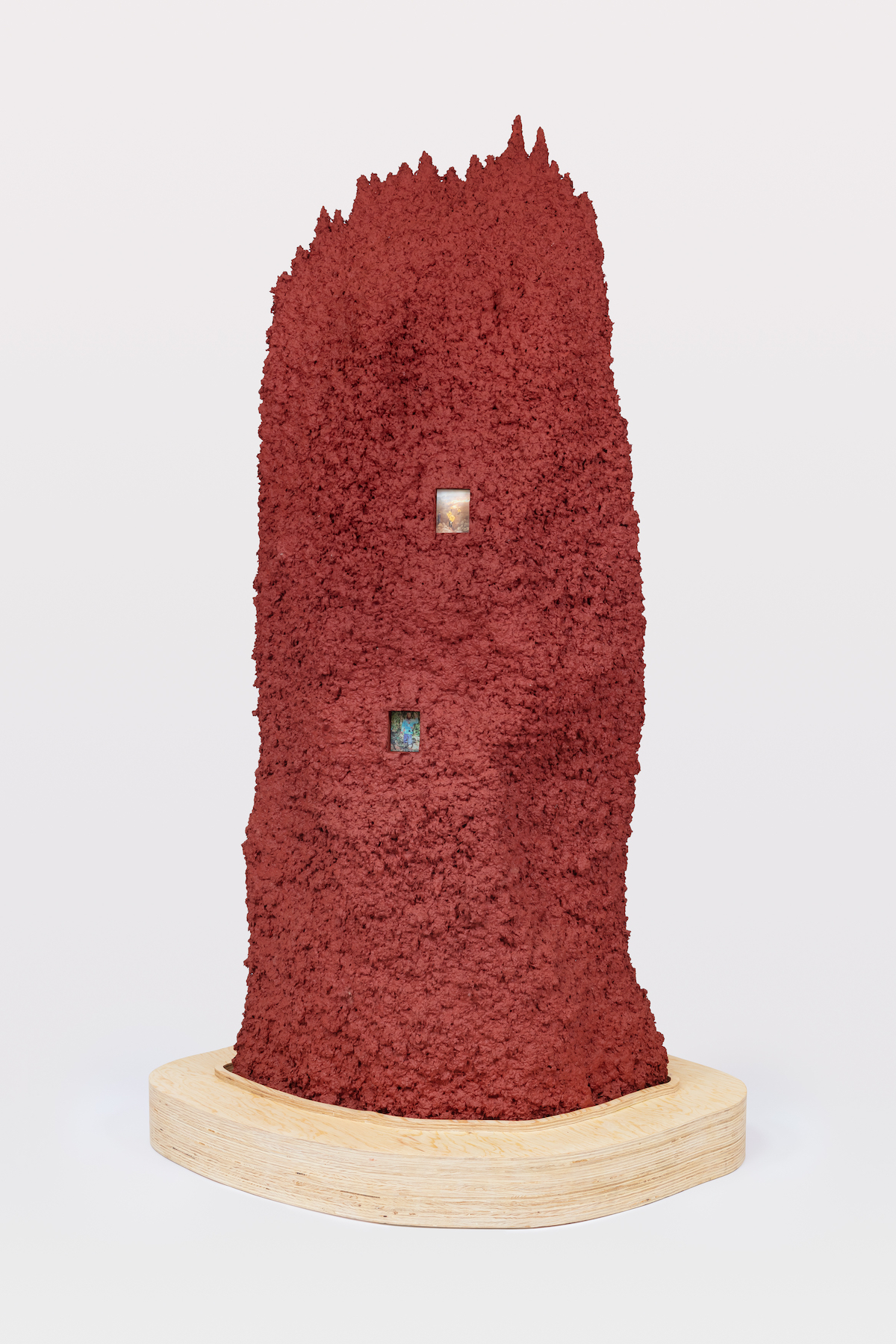 Being an artist no matter on what scale, you are constantly hit with self-judgment and self-doubt. How do you balance that, and how do you deal with the external praise and criticism?

I have to admit that there’s a side to it I don’t handle too well. I am a homebody and don’t have a very active social life. Especially now in the pandemic. I am usually with my family and a close group of friends that make my community. I rely on my partner, sometimes a bit too much (haha), but the truth is that he has been there every step of the way for the past 18 years. Those affective relations are important for sustaining my work. I haven’t done it all by myself. The upside of it is being able to share my work with large groups of people and to hear their stories and experiences with the work I do. That makes my day.

Your work consists of a variety of different practices: installation painting, performance, sculpture, and film. How do you manage to keep it all naturally orchestrated? What is your tactic, and how has it worked out for you so far?

I get bored quickly if I do the same thing over and over so I prefer to take chances and risks. It’s more fun that way. It’s usually chaotic but I get a lot of energy from that, and I learn. And that for me is the joy of art-making.

A big portion of your work explores and criticizes consumerism in this day and age, the disposability of almost everything, and how lightly it is taken by all of us and especially the western world. Money and commercialism are an inevitable part of the art world today, how do you maneuver around that?

My work is often framed as a critique of capitalism and I am starting to learn that simply isn’t enough. Instead, we should generate alternative narratives based on the personal. Stressing the idea of collectivity is important for me for that reason. Listen, I’m a consumer, and I have to live from my work and there are contradictions in that. But that doesn’t impede me from using the work as an experimental ground to discuss issues that concern me from my own personal experience and most importantly use the exhibition spaces as places for interaction with other people and other stories. 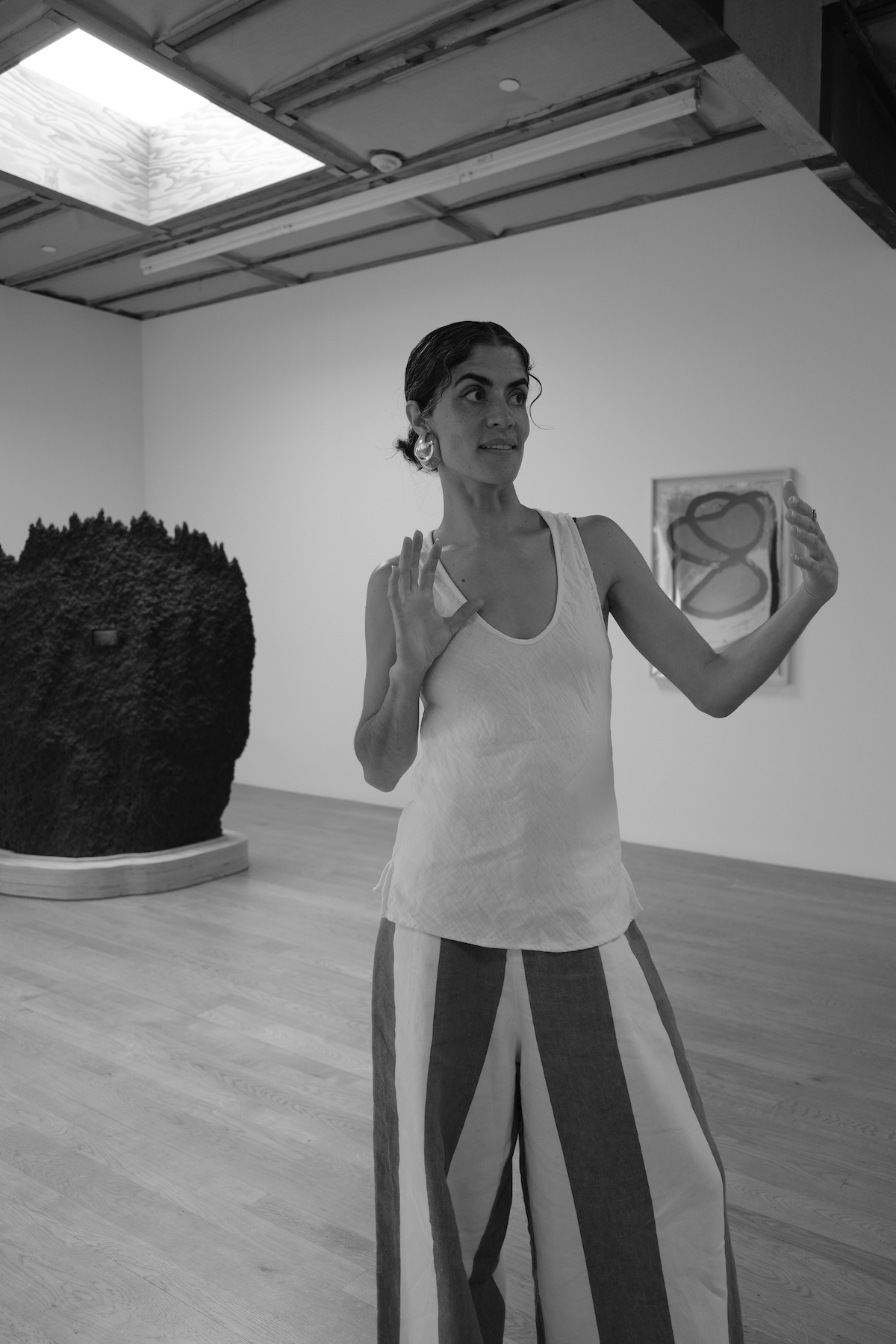 Your work is dominated by textiles, color, and materials. Have you ever worked with a fashion house on a collection or a project?

Yes, I am currently working with a luxury brand but I can’t say much about that yet.

Pia Camil’s show Nidos y Nudos / Nests & Knots is currently on view at Blum & Poe Los Angeles. You can follow her via Instagram at @piacamil.