Intergalactic worlds imbued with ritualistic and ceremonial iconography define the collages of London-based artist Seana Gavin. Spending part of her childhood in the famous hippy town of Woodstock, NY, Gavin was inspired by the psychedelic remnants and memorabilia of the celebrated 1969 festival, as well as growing up amongst her father’s sci-fi book collection. Fascinated with the concept of time and its abstract qualities, Gavin explores ancient theories from varying civilisations. These include the Hopi Indians from Arizona, a tribe who lived with no general notion or intuition of time and existed as one smooth flowing continuum. Drawing on these principles of living, she creates portals into unchartered universes where dystopian and utopian worlds meet.

More recently, Gavin exhibited a selection of photographs taken on disposable and film cameras, alongside ephemera and diary entries produced during her time travelling around Europe in the 90s to the early 2000s with the musical, arts and free party sound system collective; Spiral Tribe. Her photographs and collages complement one another, offering insight into worlds that have been lost as well as those not yet found.

As we continue to navigate these uncertain and somewhat disconcerting times, Seana’s creative vision provides attractive escapism. Her collages take you down a multi-coloured, psychedelic hole, while her photographs provide nostalgia tinged with sadness, as we reminisce about the freedom and hedonism of 90s rave culture – and at this time – dance/club culture altogether.

Seana speaks with Teeth about her experiences with lucid dreaming and its relationship to her collage work. Alongside delving into the reverence her images from 90s rave culture share with the developing wokeness of youth culture and grassroots political movements today. 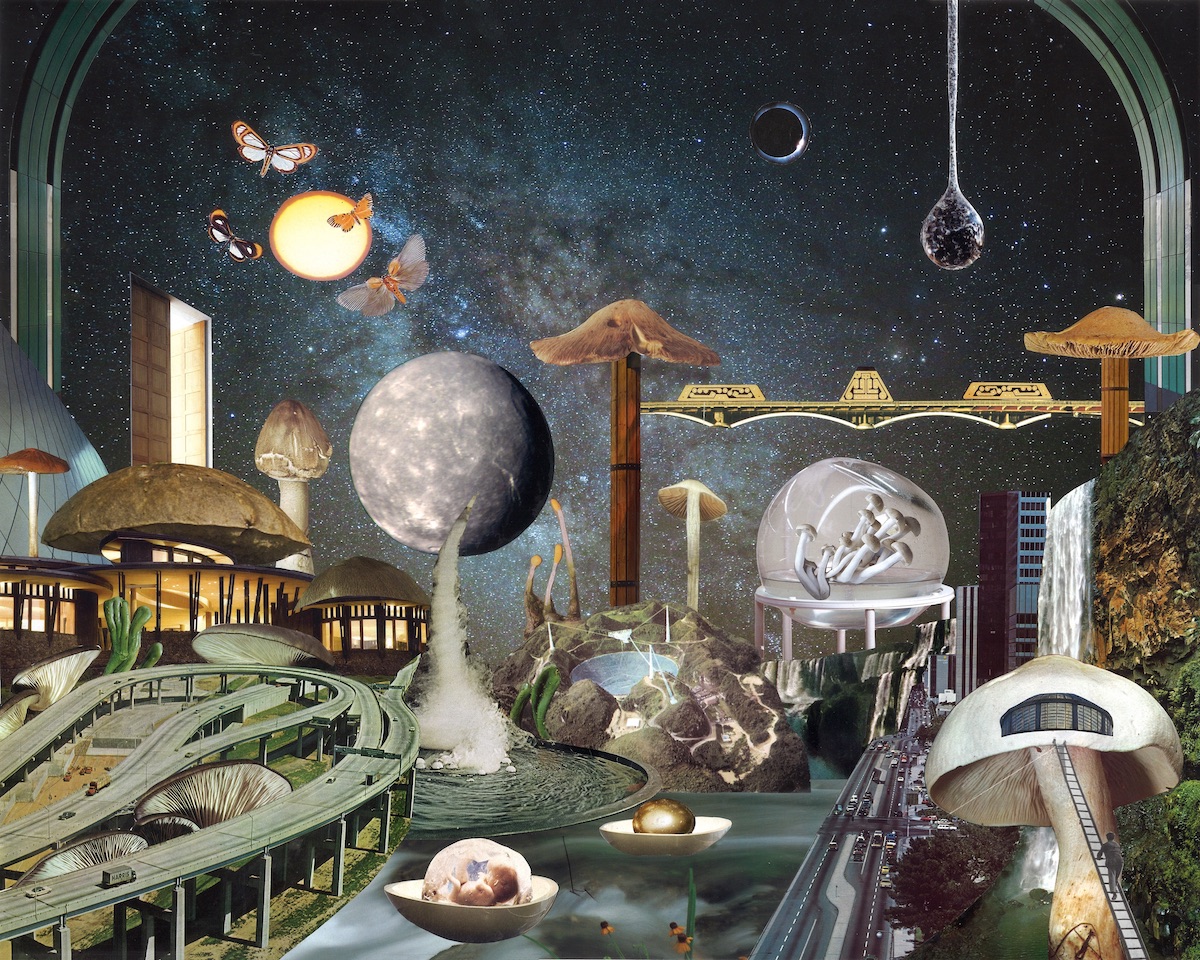 To start with, can you tell me a little about your arts background and how you came to work mainly with collage?

I did a Visual arts drawing degree at Camberwell. But at art school, I felt there was too much emphasis on the conceptual. So my experience wasn’t great there as I just wanted to develop my drawing skills in a traditional sense. After I left I felt very drained and creativity blocked for many years.

I fell into collage very naturally in 2009. My sister suggested I try it out and I immediately felt I had found my medium. I didn’t have the daunting feeling I would get from a blank canvas. I could immediately play around with imagery and juxtapositions on a page and start to visualise something coming together. To begin with, I made a point of not looking at other collage work as I didn’t want to feel I was being influenced by what I saw and wanted to develop my own style. At that stage, I never dwelled on thoughts of anyone viewing the work. I was enjoying the freedom of creating. After years of being blocked, collage brought the joy back for me. I started to make a series of Heaven and Hell inspired pieces and was lucky to be given the opportunity to exhibit them in a solo show. That was the first time I had showcased my work to the public, there was a good response and the rest spiralled from there.

These pieces are unique creations that have been referenced as their very own psychedelic universes. How much would you say psychedelia influences your practice, if at all?

I spent my childhood in Woodstock, upstate NY. The town had a lot of leftover psychedelic memorabilia from the 1969 festival. So that aesthetic may have been ingrained in me. My work was also inspired by my childhood obsession with looking through my father’s collection of vintage Sci-fi and 60s utopian art books.

When I grew older as a teenager in London I did experiment with psychedelic drugs, which overall wasn’t a great experience for me as it usually resulted in bad trips. But I believe it may have opened up my imagination even more afterwards as a result. I’m sure this has stayed with me and influenced my work. 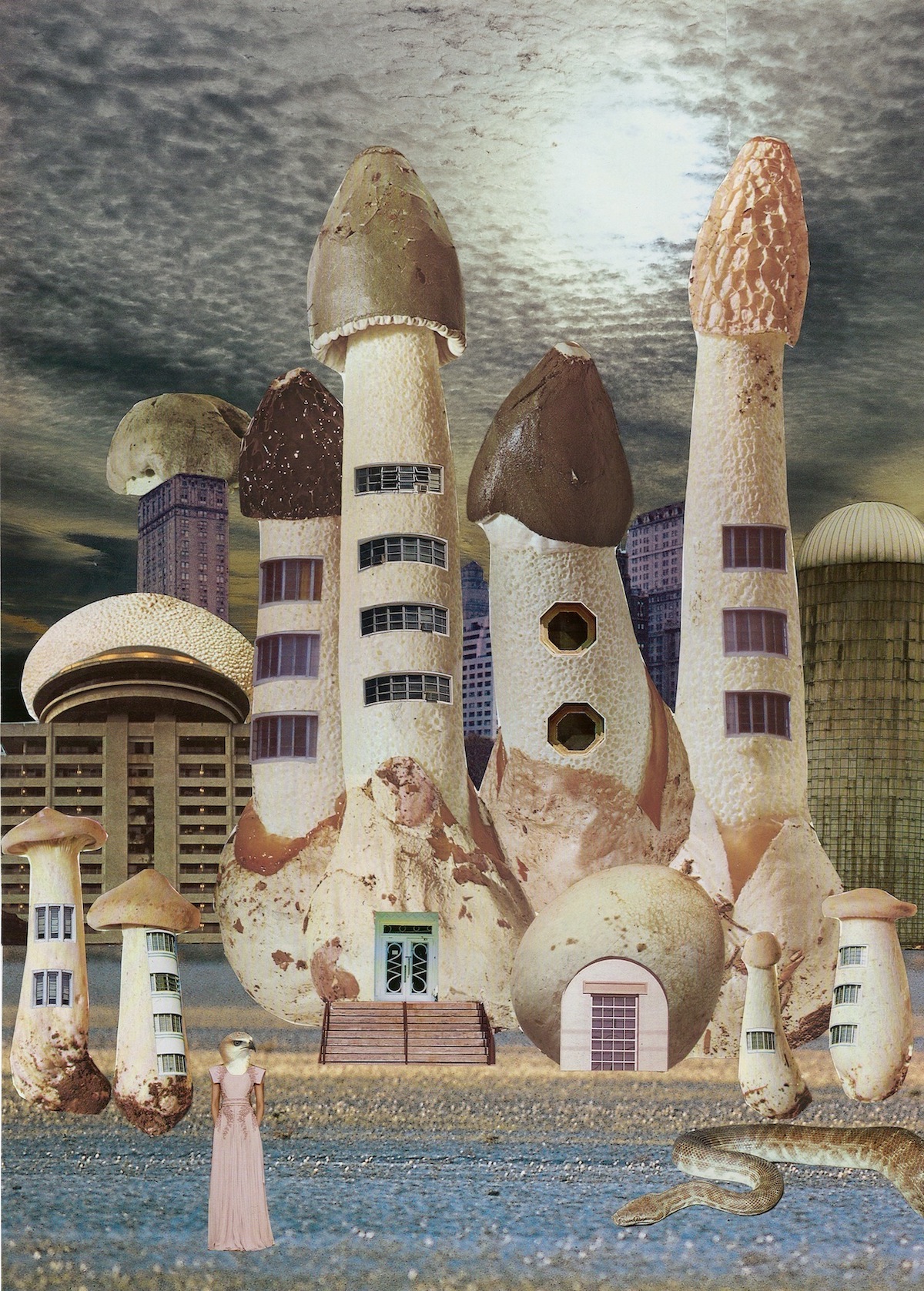 There seems to be a ritualistic element to your work, perhaps most notably in your recurring use of the mushroom – would you agree and can you tell me about your interest with the plant?

Yes, there are often recurring themes in my work. Mushrooms have regularly appeared in my collages since the beginning. I enjoy playing around with their scale to give them different surreal meanings, for example transforming them into architectural formations. Like a lot of people, I also associate them with science fiction and fairy tales such as Alice in wonderland. I also just love the huge variety of shapes and forms they appear in. But It wasn’t until the recent Mushroom group show I was included in at Somerset House that I realised quite how popular mushrooms are as a whole!

Staying on the idea of ‘ritual’ – would you say this is relevant to your photo-series that documented your time travelling among Spiral Tribe in the 90s; a nomadic group of travellers seeking a life free from societal convention and embracing total hedonism.

When I became part of the free party underground movement in London in 1993, going to these parties became a weekly ritual. When the sound systems moved to Europe and it evolved into a full-time lifestyle, it was definitely about breaking away from a conventional way of life. But it was very much about community and freedom more than just pure hedonism.

Many of your works create futuristic worlds where architecture from the past, present and future feature prominently. Whether your worlds are utopian or dystopian is sometimes uncertain – is this intentional?

I guess so. My aim is to create imaginary, otherworldly landscapes that the viewer will feel they are physically entering. Whether it’s utopian or dystopian depends on how an individual interprets the environments. 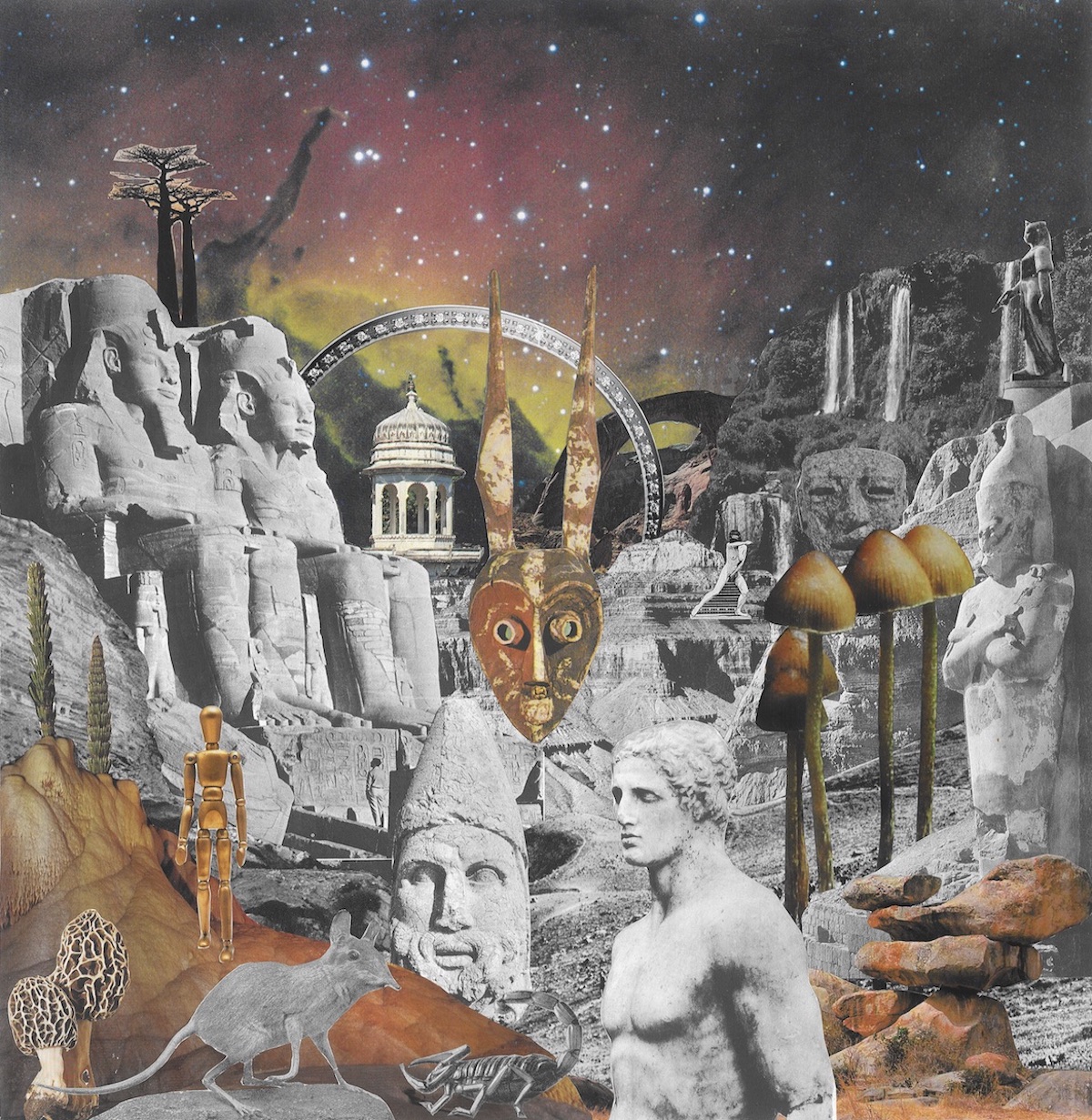 And there also lots of references to concepts of ‘time’ combining ancient and future civilisations.

Yes, that’s very true. That stemmed from my solo show ‘ End Times’ in 2014. I created a series of works where visions of the past and future coexisted in the present. And that theme has continued. I am interested in the different theories and approaches to time in various cultures and civilisations. Western concepts of past, present and future are not universal.

For example for the Hopi Indians of Arizona, there is that which is manifest and that which is beginning to manifest. They believe concrete objects belong to the past as they are things that have already come into existence. And mystical Hindu philosophy describes time as an illusion. This idea of time is echoed in the contemporary study of space and science. Astronomers never look at an object in its present state but view galaxies as they existed millions of years ago.

By incorporating imagery and symbolism of ancient civilisations and tribal cultures, my work explores the relationship between the past and a concept of the future.

From what I understand, your process of working/creating is very organic. In that you let your subconscious connect with the images you place on paper and from there you manage to conjure up each of your pieces – do you think this style of creativity was inspired by your experiences of lucid dreaming?

That’s an interesting thought. Dreams do play a part in my work as I’m interested in different levels of consciousness where the rules of reality do not apply. My experience of lucid dreams is more about being conscious that you are dreaming so you become able to control what is unfolding in the dream. But when I am creating my collage works it is more about letting go and allowing the natural, organic, creative process to take over without trying to ‘control’ too much.

Would you say there are any similarities between your collage and photographic work?

In some ways, there is a connection. I am very obsessed with colour and light which I think you can see in both sides of my practice. And sometimes there are visual references to psychedelic experience in my collages which overlaps with 90s rave culture. 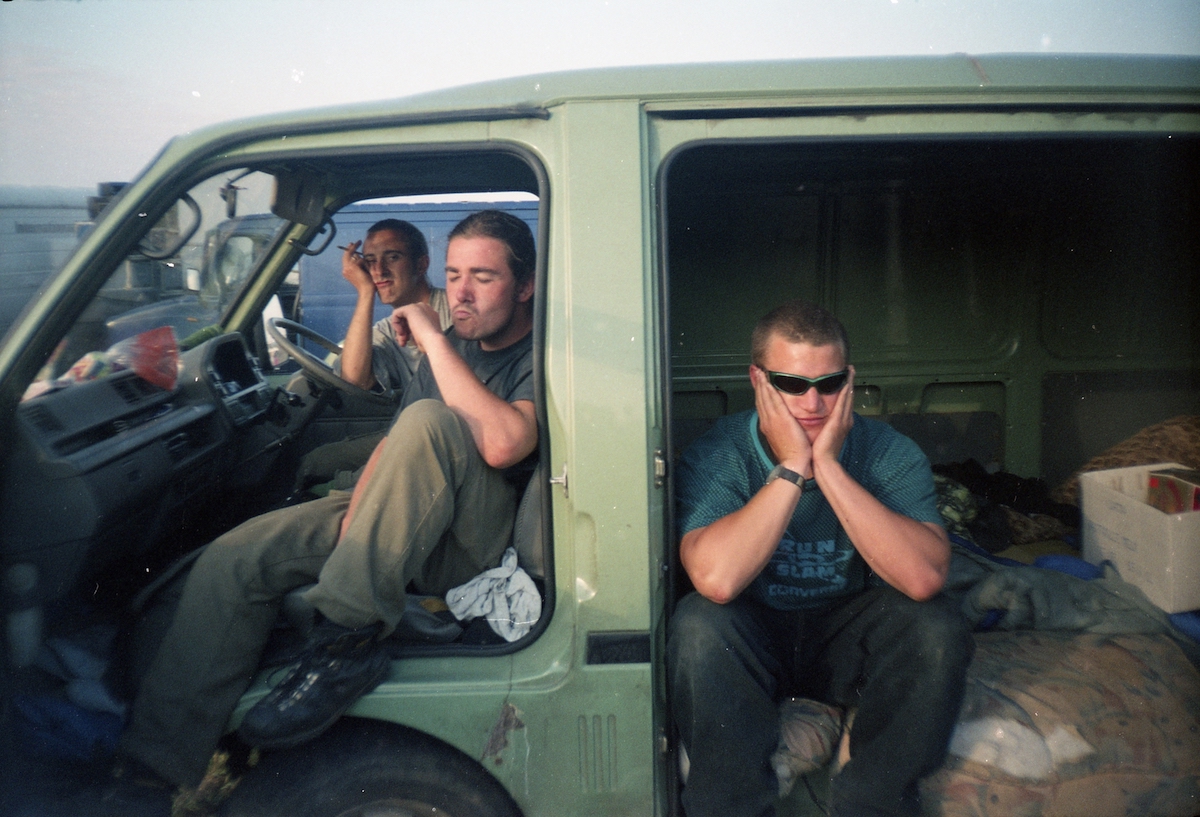 Your images could be seen as politically and culturally poignant given our current climate as they celebrate the freedom of movement across Europe – as you travel mainly by car/van to different countries for parties – and can highlight the uncertainty we are now faced with due to Brexit. Did this influence your decision to exhibit the images 20 years after taking them?

Last year I started to feel like it was time to share my experience of that era as so much time had passed. Groups like Extinction Rebellion were expanding and taking over news headlines. Coinciding there seemed to be an increased interest in 90s rave culture and I became more aware that there wasn’t a huge amount of documentation of that scene as it was the days before smart-phones. It felt like the first time since my youth when social/political rebellion was so prominent, that the younger generations were again becoming more politically engaged after years when they seemed to be more focussed on fame, social media and materialism.

Part of how I ended up sharing this archive for the first time in my solo show last summer was also pure synchronicity. Pete who has the gallery space in Paris galeriepcp wanted to exhibit a show relating to Spiral Tribe and 90s underground rave culture. My sister who is in the art world and knew Pete pointed out to him that I had an archive that had never been shown of photos, diary entries and ephemera from 1993-2003 during the time when I was heavily involved in the free party movement.

There was a lot of great press surrounding the show which led to me being included in the group show  ‘Sweet Harmony; Rave today ‘ at The Saatchi gallery. Which coincided with the 20 year anniversary of ‘The second summer of love’. So everything just slotted into place. 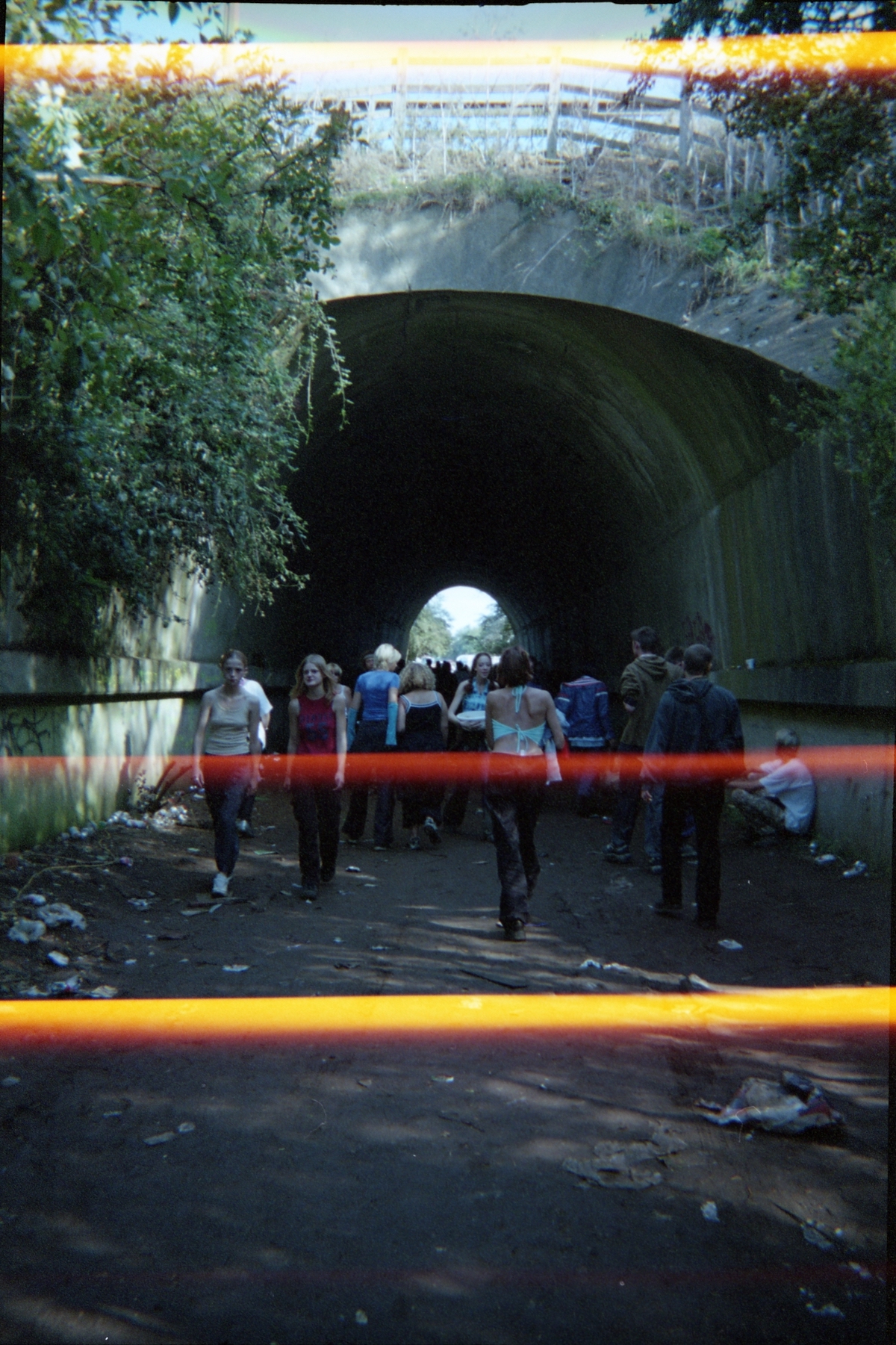 Another interpretation is that they pay homage to an era of the ‘free party’ that has arguably been lost as we are unfortunately faced with ever-increasing rules and regulations that make it harder to allow for spontaneous hedonism. What are your thoughts here?

Speaking in terms of pre-pandemic life – yes in recent years with an increase in club and venue closures it feels like there are fewer locations in London in particular for people to let off some steam on a dance floor.

But I also think there is also a lot of nostalgia for a period of time that can not be repeated in the same way. Every generation has its golden movement. In the 60s there was the free love hippy era, the 70s brought Punk and Disco, the end of the 80s going into the 90s was the birth of rave and dance music. When a subculture or music scene first starts it has raw fresh energy. The underground free party rave movement grew in a time before smartphones or social media. In some ways, it was a period of innocence. I think people look back with fondness of that time and younger generations idealise it. 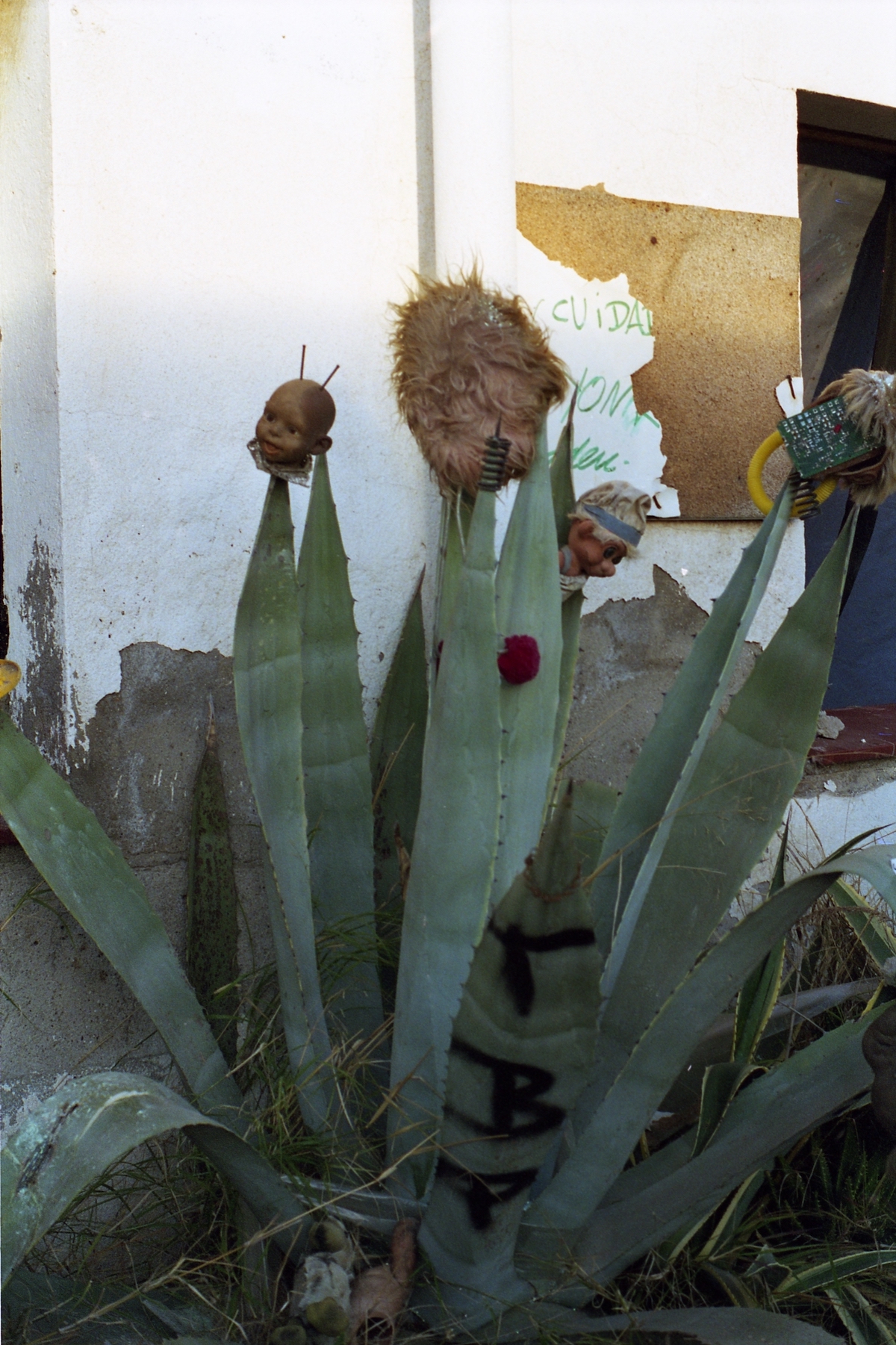 Overall, how did you find it revisiting these images – especially having lost a close friend when you were part of this underground free party movement?

It brought back a sea of memories and mixed emotions- nostalgia, sadness and joy. That decade of my life had been buried. I kept some of the photos in albums but there were a lot of new images I came across when sifting through the negatives. Seeing the visuals combined with diary entries really brought it all back to life and to the forefront of my mind.

I had lost contact with a lot of people from back then when my life went in a different direction. But as a result of the exhibitions, I have been reconnected with friends which has been really healing.