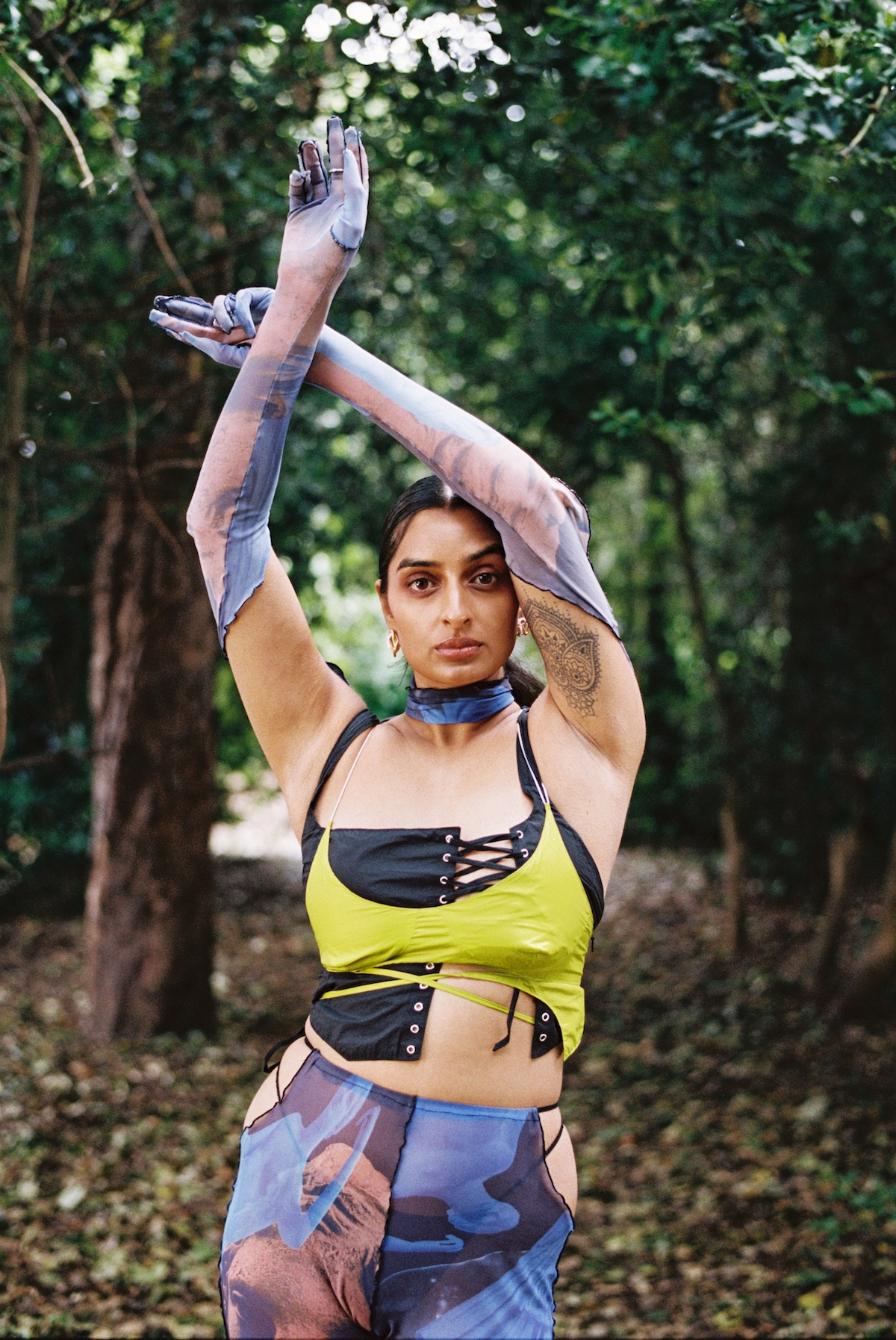 You might have heard about the fashion watchdog account Diet Prada, but what about Diet Paratha: the brainchild of New Zealand-born, London-based Anita Chhiba? What once began as an Instagram page sharing vintage Bollywood movie posters has since evolved into a community of over 10,000, who refer to the feed for inspiration and empowerment. Unlike Diet Prada, Chhiba’s motivations for the account are less to do with calling out, and more concerned with championing the many works of Middle Eastern, North African, and South Asian creatives that have too often been overlooked.

Chhiba curates and creates content of an impeccable standard, with no motivation to make her feed “palatable” to a Western audience. Projects such as her side profile series combine imagery with writing, exploring the damaging effects of dominating Euro-centric beauty standards. She does this to celebrate the beauty of MENASA communities, regaining control over the narrative, and uplifting deserving talents as she does so.

Nominated recently in the prestigious Dazed 100 list, Chhiba explains that with the prize money she would create a photographic series and exhibition celebrating South Asian people excelling across fashion, music, and activism. Even with such scope to expand and grow, the essence and motivation of Diet Paratha remain simple: “I’m showing marginalised creatives doing regular shit, and doing it really well.” 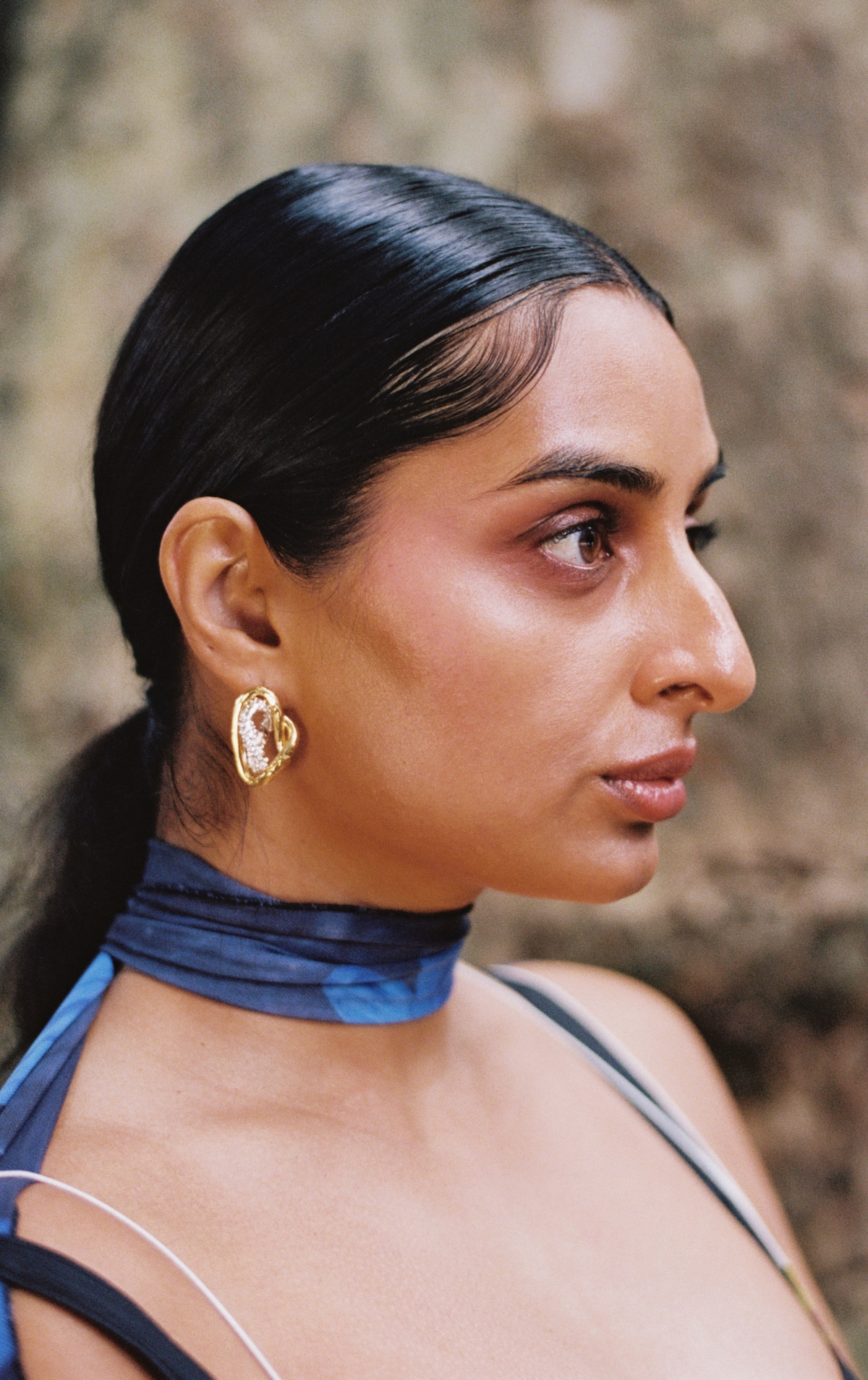 What keeps you motivated in doing the work you do?

We’re almost drowning in this whitewash of Western media and I hadn’t really seen anything in the way that Diet Paratha has curated things. I share work from people that are at the top of their creative game, across fashion, music, activism, modelling… but not work that’s necessarily restricted to cultural ties. I don’t want to feel bound to only posting stuff with people wearing cultural clothing and such. I think for some reason Western media doesn’t really see us as people, they see us as people attached to our culture. They see one homogenous group. So, I really feel like, even though it’s such a basic concept, it’s important; and honestly, I’m just showing marginalised creatives doing regular shit, and doing it really well.

In doing this, you’re spotlighting a wide spectrum of individuals that are worthy of being respected for their talent, rather than the fact that their work is ‘exotic’ in comparison to that of white creatives…

Absolutely! It’s just so amazing to be able to pick from a catalogue of excellence and we don’t just have to post stuff because it’s created by a brown person. I pick imagery that’s of a certain calibre in order to create a really strong inspiration hub for people to refer to. 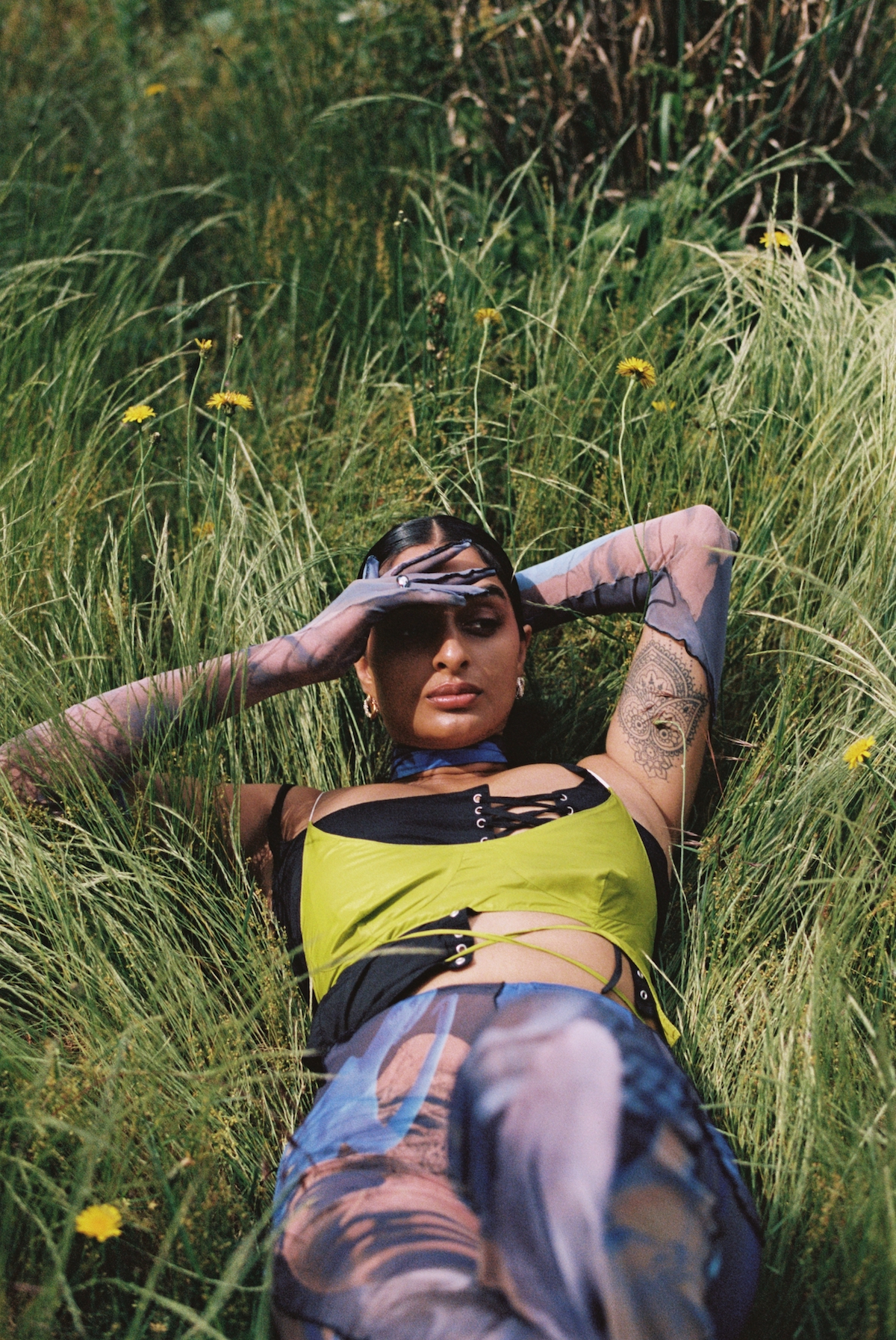 Where are you finding your inspiration for the page?

I find a lot of stuff through Indian, Middle Eastern or South Asian models, but to be honest, I have no real reference point that I always go to. My social media algorithm knows me pretty well, so I follow all the right people and I see a range of amazing content that naturally fits well with the page.

Can you tell me about some of your early creative influences?

None of my early influences were really South Asian, I guess because of the explicit lack of representation in Western media. Pop culture and music were my most memorable reference points, and I vividly remember being obsessed with groups like the Spice Girls and Destiny’s Child, dressing up in little outfits and creating little girl bands with my cousin and sister. As I got older, my focus turned more towards fashion campaigns, even though sadly I never really saw South Asian people reflected in a lot of the work that I loved.

Why did you start Diet Paratha and was it with the same intentions as you have now?

Not at all. I started it back in 2017 and was still just discovering what I wanted to do with it. I guess I was only just becoming proud of who I was back then because when I was growing up, we didn’t have the internet. I wasn’t proud of my culture and I was too concerned with trying to assimilate and distance myself from it because it wasn’t admirable or very widely accepted. I really didn’t even understand what white privilege was until I was maybe 24 or 25. I joined Instagram and came across a page that was posting various South Asian illustrators and I thought, “This is incredible, I kind of want to start something like this too“. So, I started reposting vintage Bollywood posters because I thought [they] would be popular to a wider audience and it was something I was proud of, but over the years I discovered more and more work across different disciplines that I decided to share. What’s more, is, I realised there’s nobody else really doing this either and I thought it was important to do it to give MENASA communities appropriate representation. 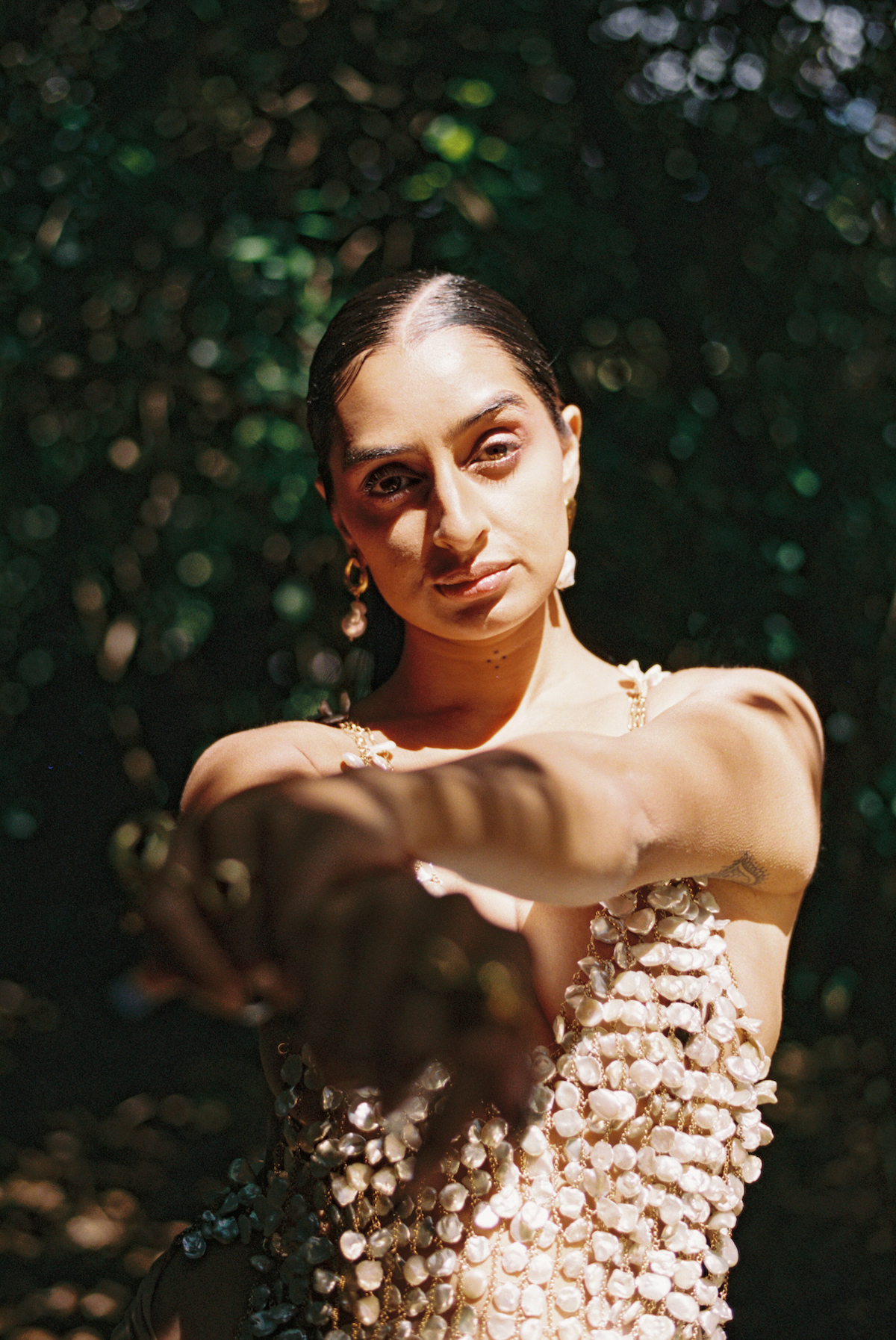 I think it’s really amazing how you can create such a celebratory community on social media. Everyone following the page has the unified intention of appreciating the same thing and appreciating what you’re doing…

For the most part, yes, but it can be quite difficult. When the community is small, it’s quite easy to police and generally, everyone that’s following the page is there because they want to celebrate the same things that I want to. But I remember this one time I did my ‘Skin Series’ that was essentially a montage of nudes, a big account reposted it and they started getting so many negative comments, a lot of which were actually from South Asians who didn’t support it. It was just so jarring to see; once something is released to a bigger audience there’s no telling what the reaction will be. It’s interesting because this incident really brought to light the issues that exist within our own community, such as classism, colourism and body positivity. I do want to keep widening the lens, but there’s no way of knowing how that audience will react to it.

So how do you want to evolve Diet Paratha going forwards?

I definitely want the community to grow but I want to start creating as well as sharing. I would love to start working with brands, to create shoots with an all-South Asian team that would subsequently represent an entire community. Also, in doing this I want to spotlight South Asian creatives; and I’m not talking about doing this stuff solely around Diwali, I’m talking all year round. It’s time we start getting recognition for the incredible work we’re capable of producing. 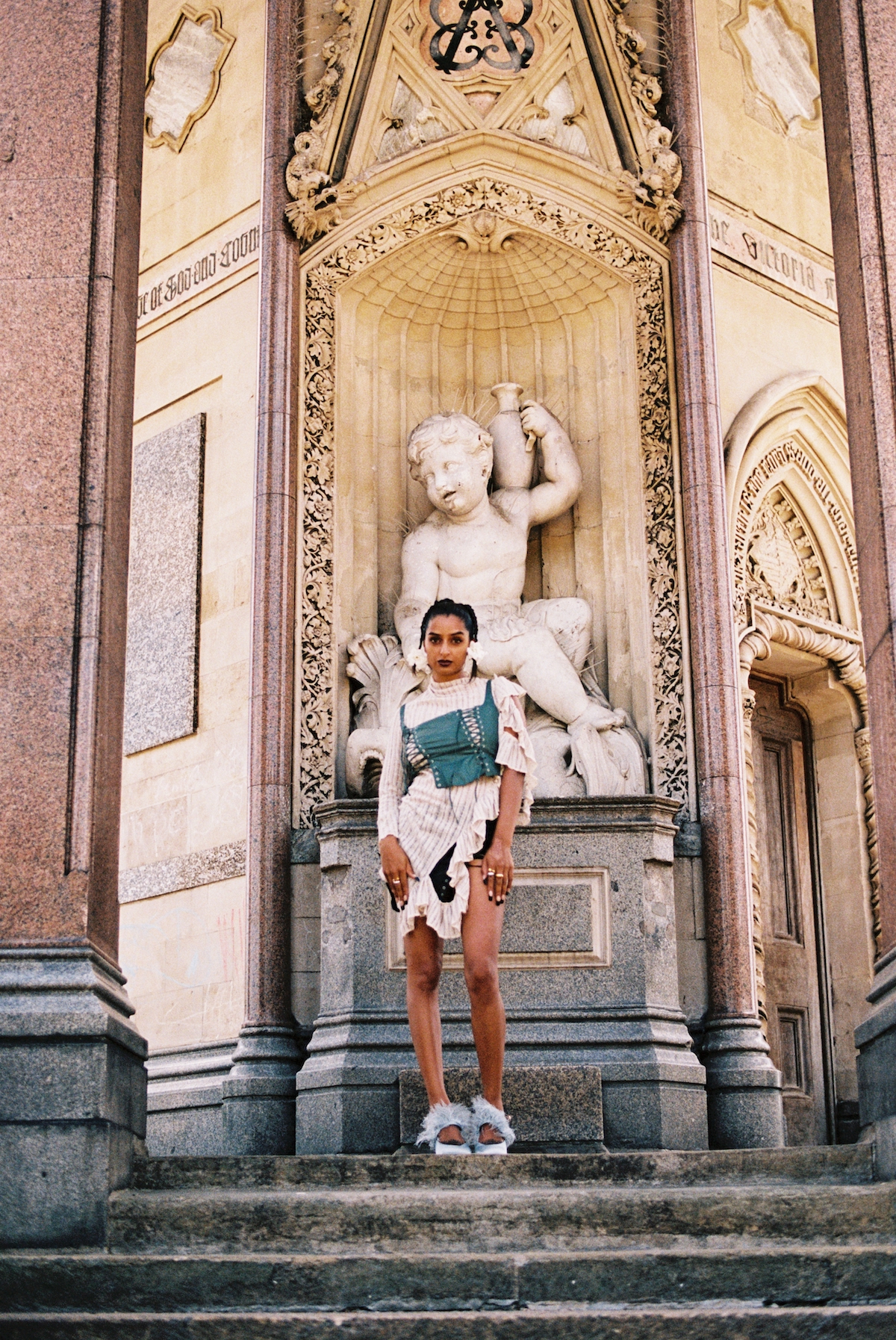