She's So Heavy: An interview with fashion designer Beau Scarlett-Pitt 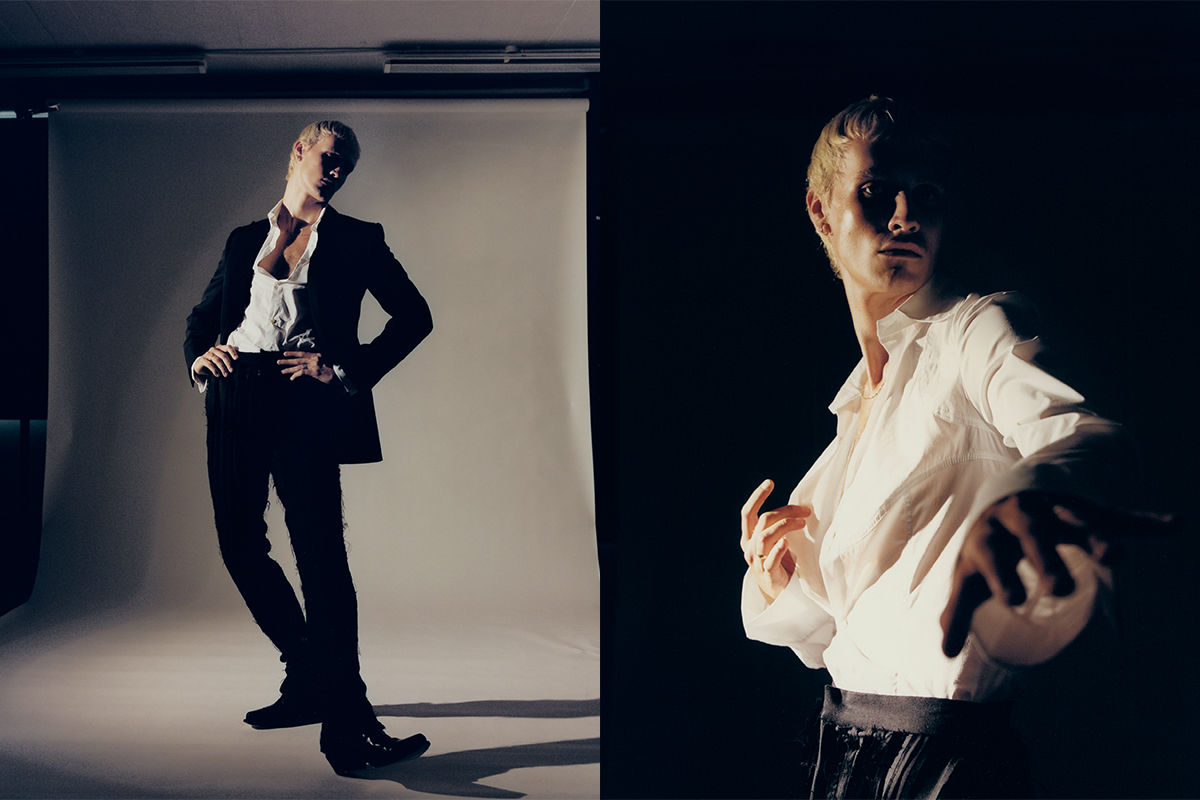 Fashion’s role as a permeable interpretation of our culture’s ethos gives shape to how we make sense of the past, and how it forms the present. There is a certain sense of give-and-take within the craft; taking inspiration and hopefully, sometimes, giving something back in return. An expansion upon the previous, not as a reinterpretation, a copy or a costume, but something original achieved through personal poetic reactivation. Designer Beau Scarlett-Pitt has channelled her graduate menswear collection into a physical embodiment of her own ‘70s inspired soundtrack, bringing a timeless edge to the rock n’ roll mystique. Classic in silhouette and concept, the magnetic energy and tension of the collection lies beneath the surface within the music that inspired it. Beau has capitalised on music’s ability to make sense of fashion, to ignite both a vision and a feeling. 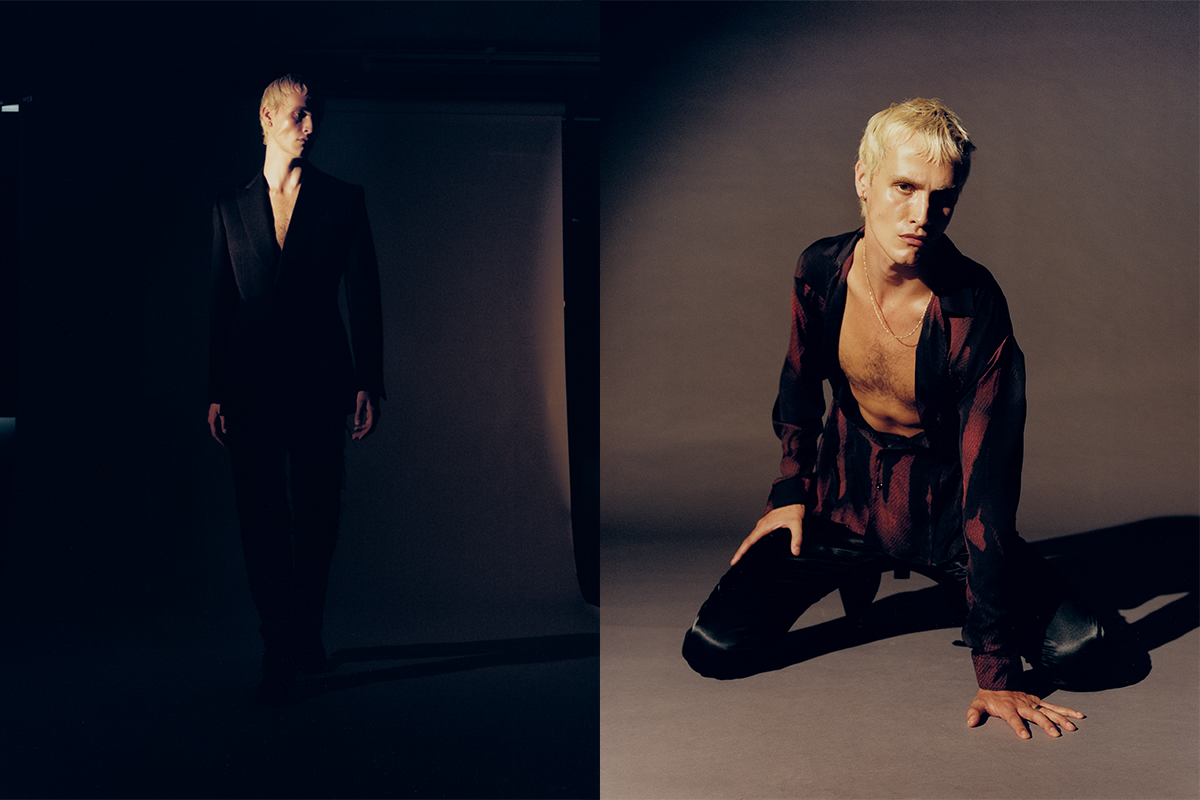 Let’s start with the relationship between music and fashion, how has music informed your work?

The collection would not have existed if it wasn’t for the music I was listening to, it is pretty much the bread and butter of all my work. It started with Led Zeppelin’s “Dazed and Confused”, just the way that song makes you move.

I kind of worked from there, when I design I relate back to the song to see if it fits what I see happening in my head.  It’s like the party’s going on here (in my mind) and I just need to get it out, to be able to convey it; something I’ve always dreamt about. That’s why I also use film, it is a big part of my communication because it’s getting exactly what’s in here, in my mind, out there.

Do you think as the collections grow you’ll continue along the “Dazed and Confused” path?

I think it’s just about what I’m listening to at the time. I was listening to a lot of Zeppelin, I mean, always have but that just resonated with me at that point in time, like, yes, I need to do something to this. It’s all about what I’m inspired by, a lot of my research actually came from ‘70s and ‘60s porn magazines. It was these women, they’re just amazing. It’s the typography, the layout, the photography, the energy they conveyed; that’s what I saw. And then it just intertwined so well with my musical taste, because I often make playlists before I start a project. I’m constantly there with these songs, the soundtrack to the collection and it’s prevalent within the results.

It does come through, and even for me as a woman, when I look at my style icons they’re all men.

Same, that’s how it’s been for years! 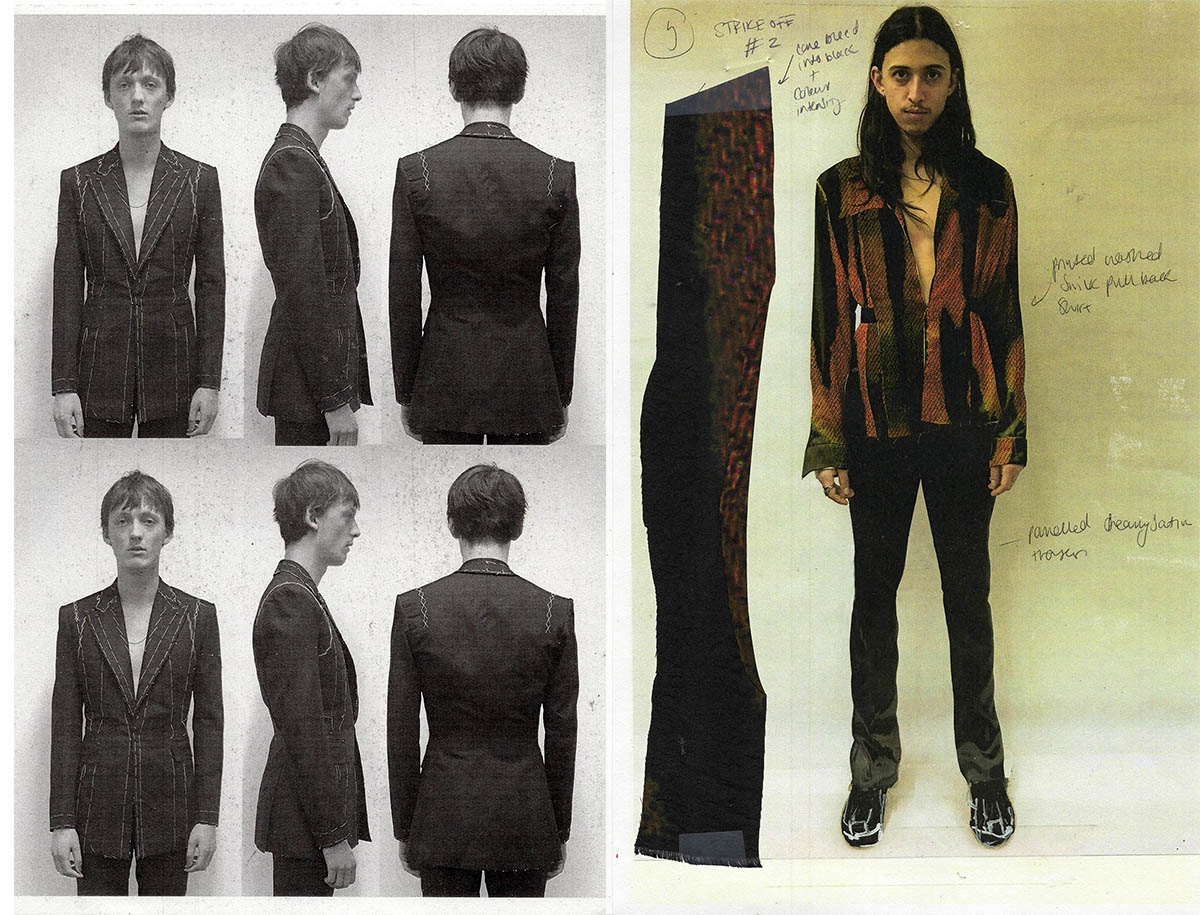 It’s Robert Plant, Jimmy Page (of course it’s Zeppelin), but also Johnny Cash with his suits, Jimi Hendrix with the ruffles and vests. A lot of my attraction to rock ‘n‘ roll comes from this fluidity and honest sense of sexuality; having your cake and eating it too.

Yes, “In order to be with the beast, you have to become the beast.”  I was reading Art, Sex, Music, Cosey Fanni Tutti’s biography.  She was doing a lot of sex and pornography work and a part of it was so she could do her amazing collages, and the Prostitution Show at the ICA in 1976 when Throbbing Gristle did one of their first gigs. She basically made all these collages with herself from the editorials she’d been in. Part of it was the fact that she wanted to see herself within the work and a big thing about my work is that I want to see my feminine sensuality within the menswear that I create.

So I needed to get her energy and these women that I’d seen in all these publications. I love menswear, but I love women. Not that I wouldn’t do womenswear, but menswear speaks more to me. 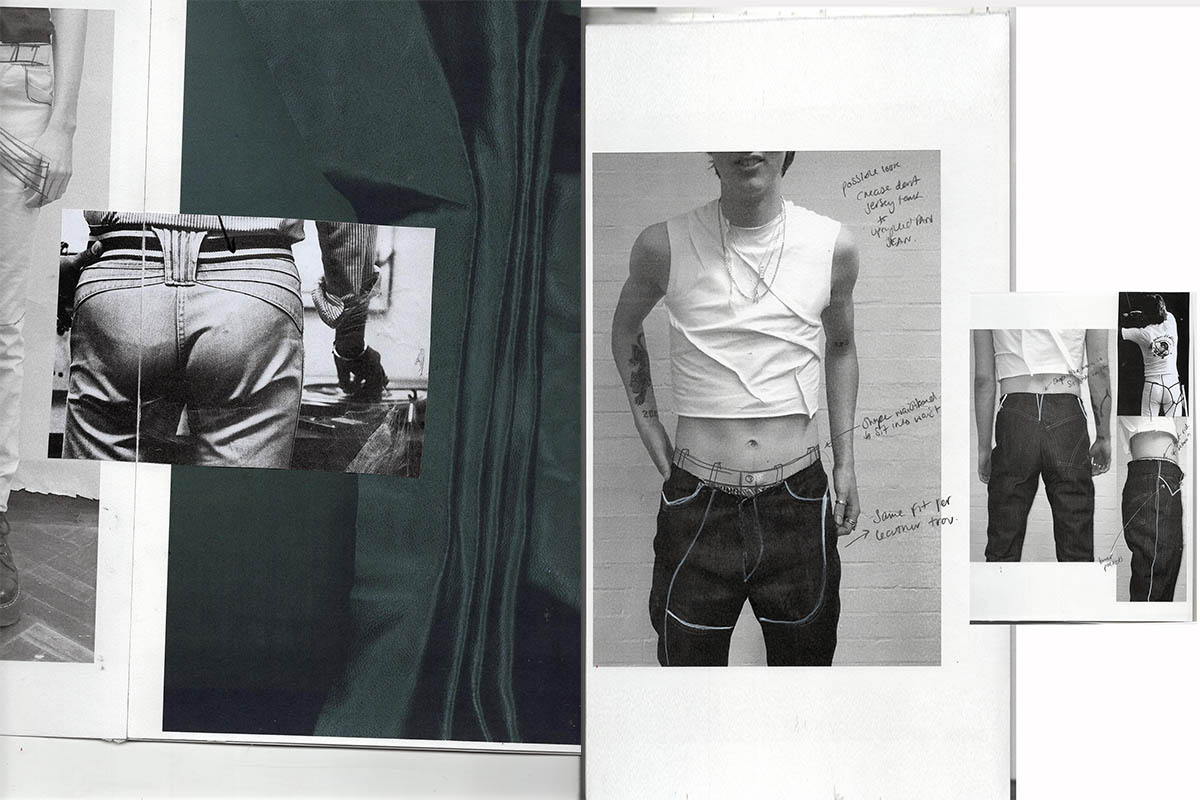 How would you describe basic menswear design codes?

I think in general, menswear is made up of uniforms. There’s such a heavy military influence throughout the whole of menswear, if you look back hundreds of years, a lot of men just wore military clothes, and then evolved from there; formal tailcoats etc. It filters down and you even had the hippies wearing decommissioned military wear in the ‘70s, going forward, especially then in the ‘90s it was this anti kind of rebellion, but existing within that code of typical menswear.

When I said menswear codes, I was going into the different areas of a man’s wardrobe. You’ve got the Canadian tux with the double denim, you’ve got your leather, biker look and more of a hot ‘70s really loose shirt and these amazing satin trousers, and then you’ve got the tailoring. Pinpointing each different area of these menswear codes in a sense and then getting under the skin of it, and really pulling out these feminine sensual influences. 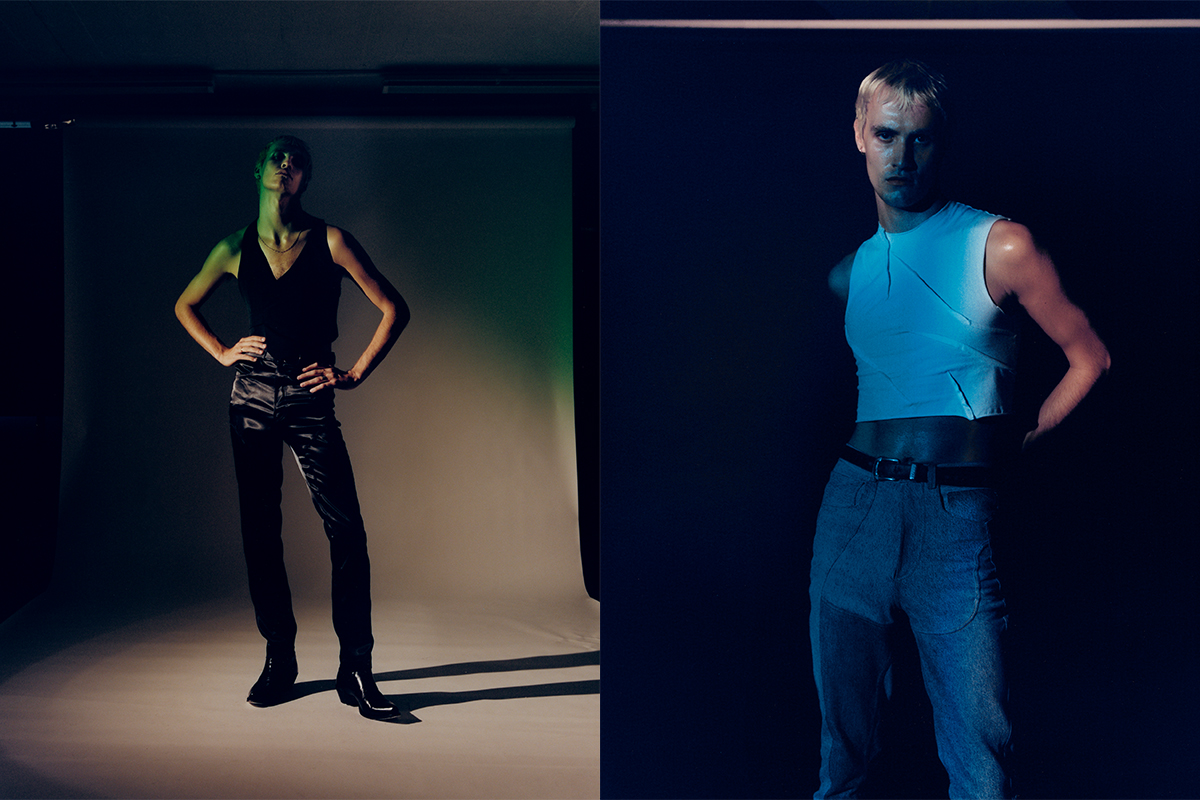 As a fashion graduate student in 2020, how do you see yourself as a designer moving forward and how do you want to reach consumers?

I took a year out between second and final year and worked in a bespoke department on Savile Row for Gieves and Hawkes, so I worked a bit in the made-to-order system and worked with the most amazing cutters and tailors, really influential people who inspired me and would help me with the collection. It’s an industry where you work for the client, you make something that fits perfectly but you don’t have much creative freedom. Then I went to Givenchy in Paris for my second placement. I worked in the embroidery department, so I got to see couture, ready-to-wear and runway. I got to see the other side of it where you design, put it out there and then hope somebody buys it. I would love to be, if there is a place, in the middle of that.

My dream is really to design clothes for tours, for bands. For them to come to me, and be like ‘listen to the album, this is the vibe, create to that.’ Which is my natural process anyway. 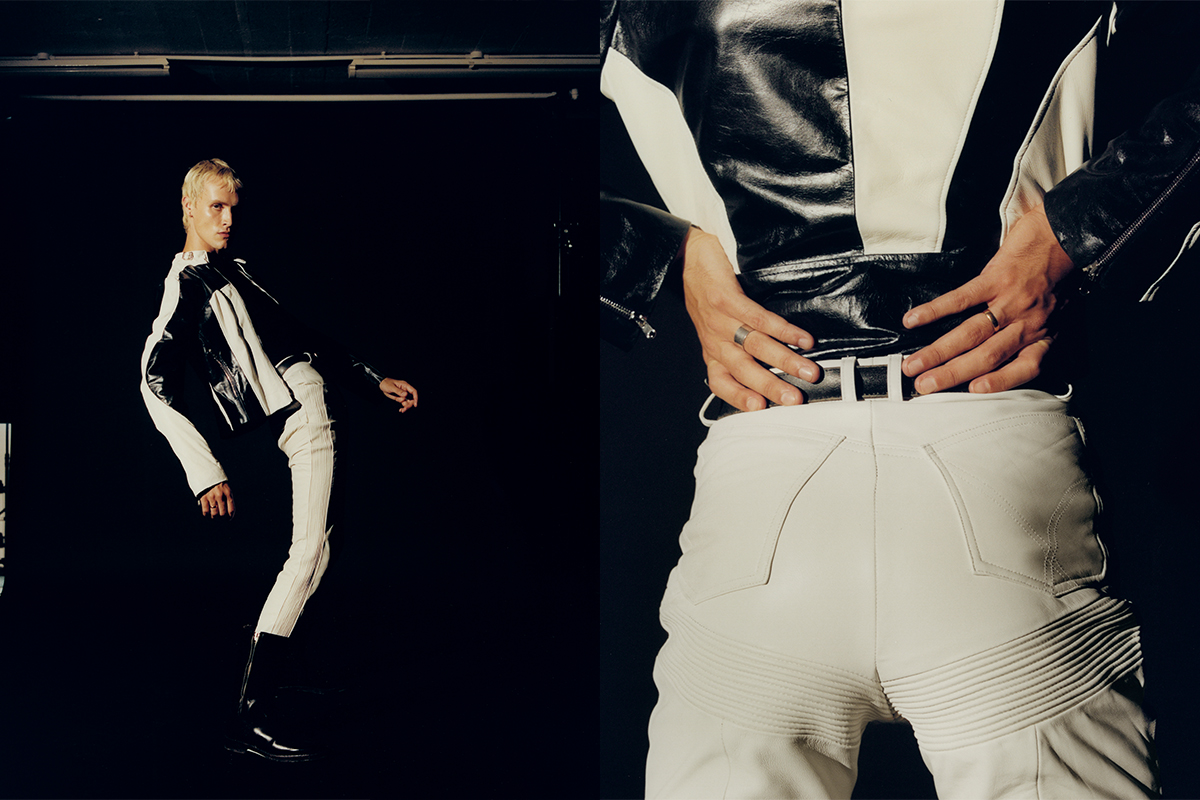 What are your thoughts on the runway, or the best way to present your work?

It’s so hard because it’s written into how fashion students see their future. Whenever I’m even looking at something, I think, how would that walk? It’s like having a fitting in your head when you haven’t even designed it. It’s an end result that you’re kind of programmed to work towards because of the system. A lot of people have switched to lookbooks, that’s a lot more common now but they both have their own limitations.

The entire structure of it all is changing, hopefully in the right direction.

I’m just hoping that my generation of designers will go in and seize the opportunities to get to a point in the industry to make effective change, to make things better because the current system is broken.

I’d like to be working to make it a great place for people, a great place for the environment so that it can carry on as an art form. If we don’t do something now, it’s not going to end well. Even studying it, you see how much of a beast it is and that’s why I think I would love to do specific wardrobe for bands. You’re creating something and it’s living a life instead of sitting in a warehouse not being worn. It’s all designed with such love and care. 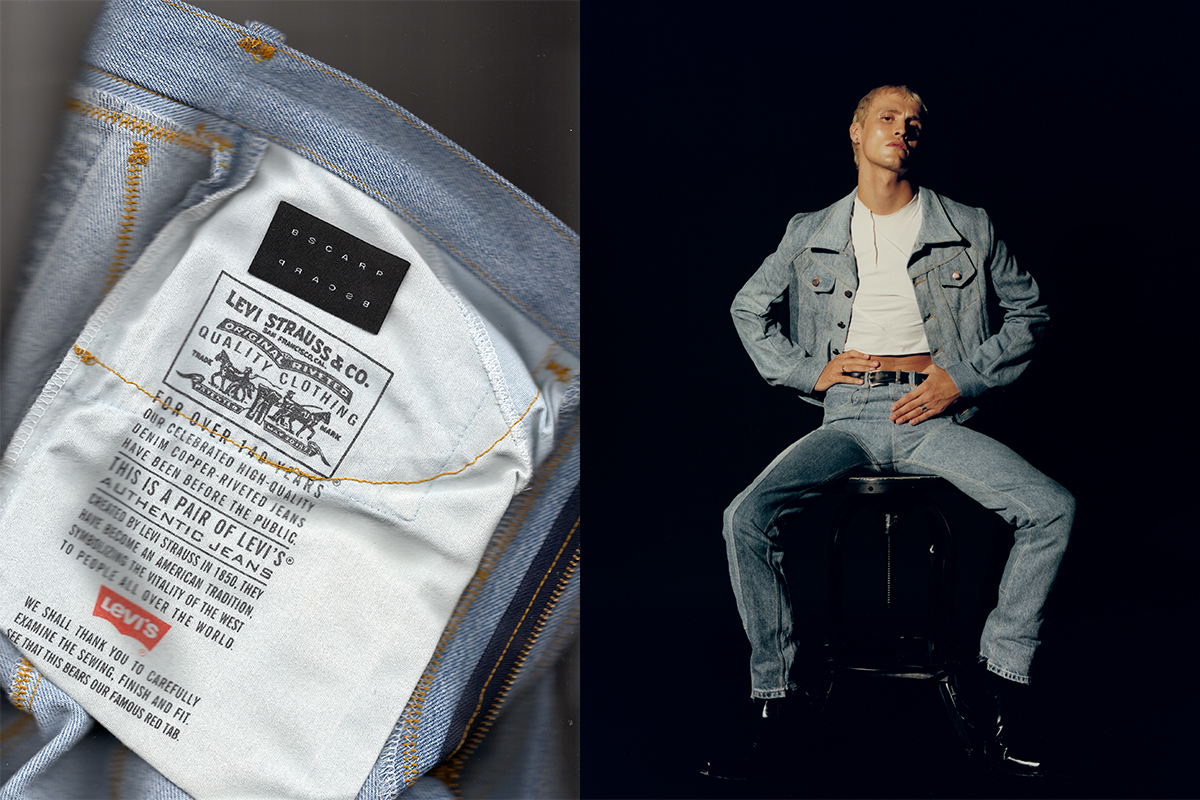 Custom and smaller quantities are not only a conscious step forward but a part of your vision, even down to the fabrics used…

There are a few boutiques that are changing how they operate, with young designers educating them. You don’t need to produce this much in order to get the right sales if you sell to the right people and pay the right prices. A lot of people in their early careers go for the wrong deals and it’s heartbreaking because these young designers are expected to know so much and are just pushed out into the world. They can have this amazing collection and great press but then there is this business backlog that’s not attended to. It’s a mixture of bad decisions.

A lot of the collection was made with old stuff that I either got donated to me from where I interned or the double denim look, for example, is made completely out of old Levi’s. We shouldn’t be mass-producing. Anybody who wants to wear my clothes is completely free to,  I just want them to feel the way that I felt when I was designing it. 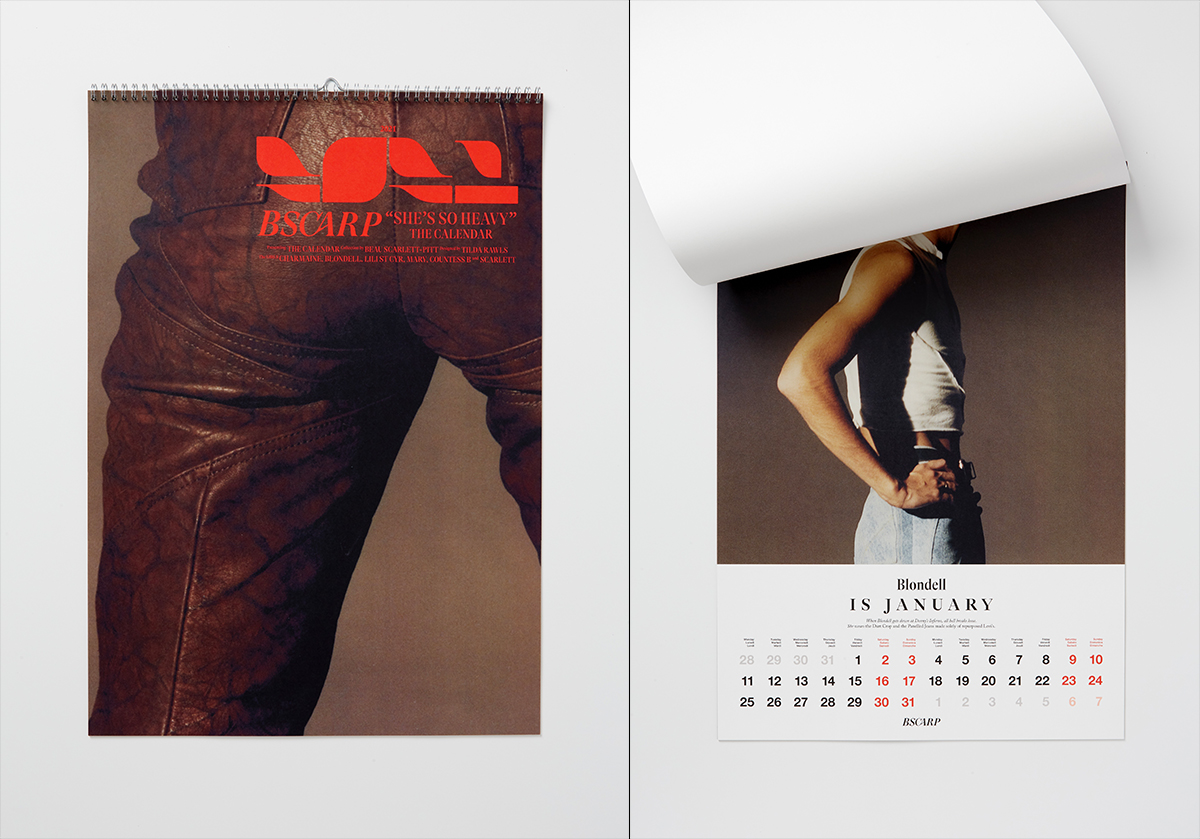 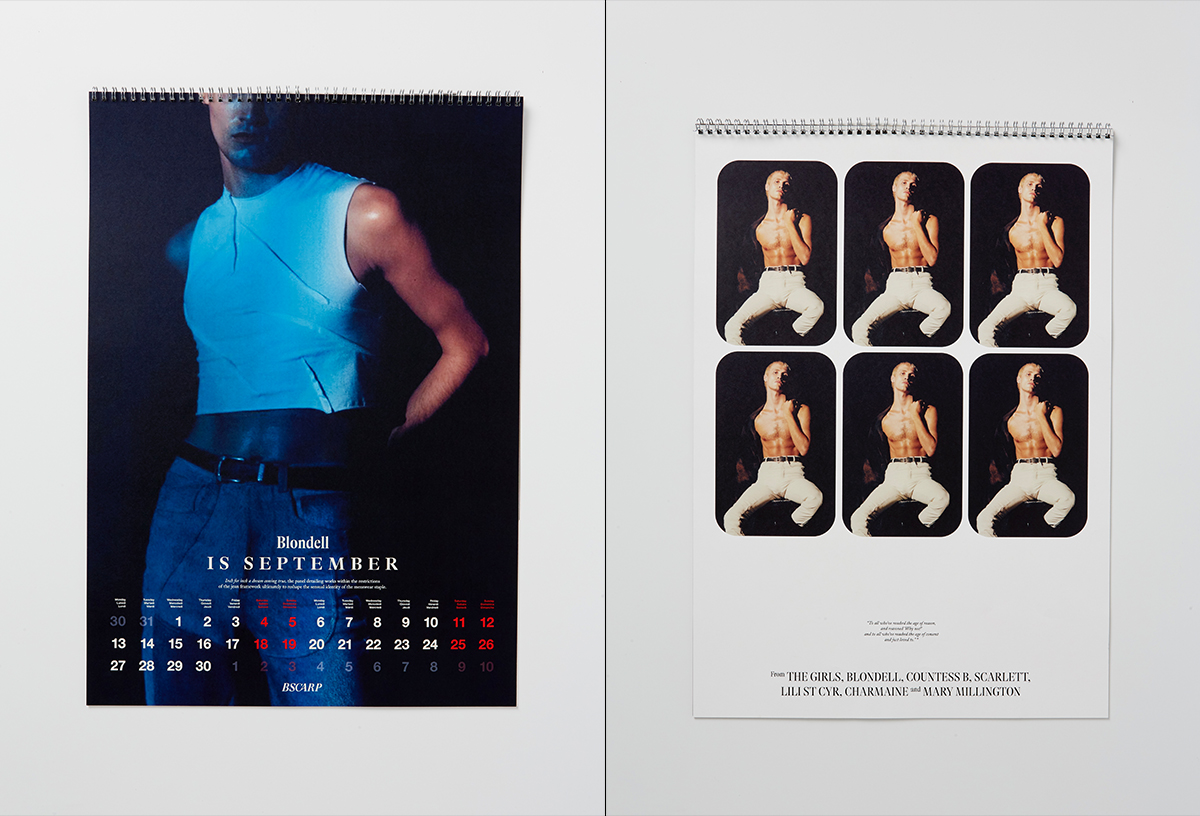