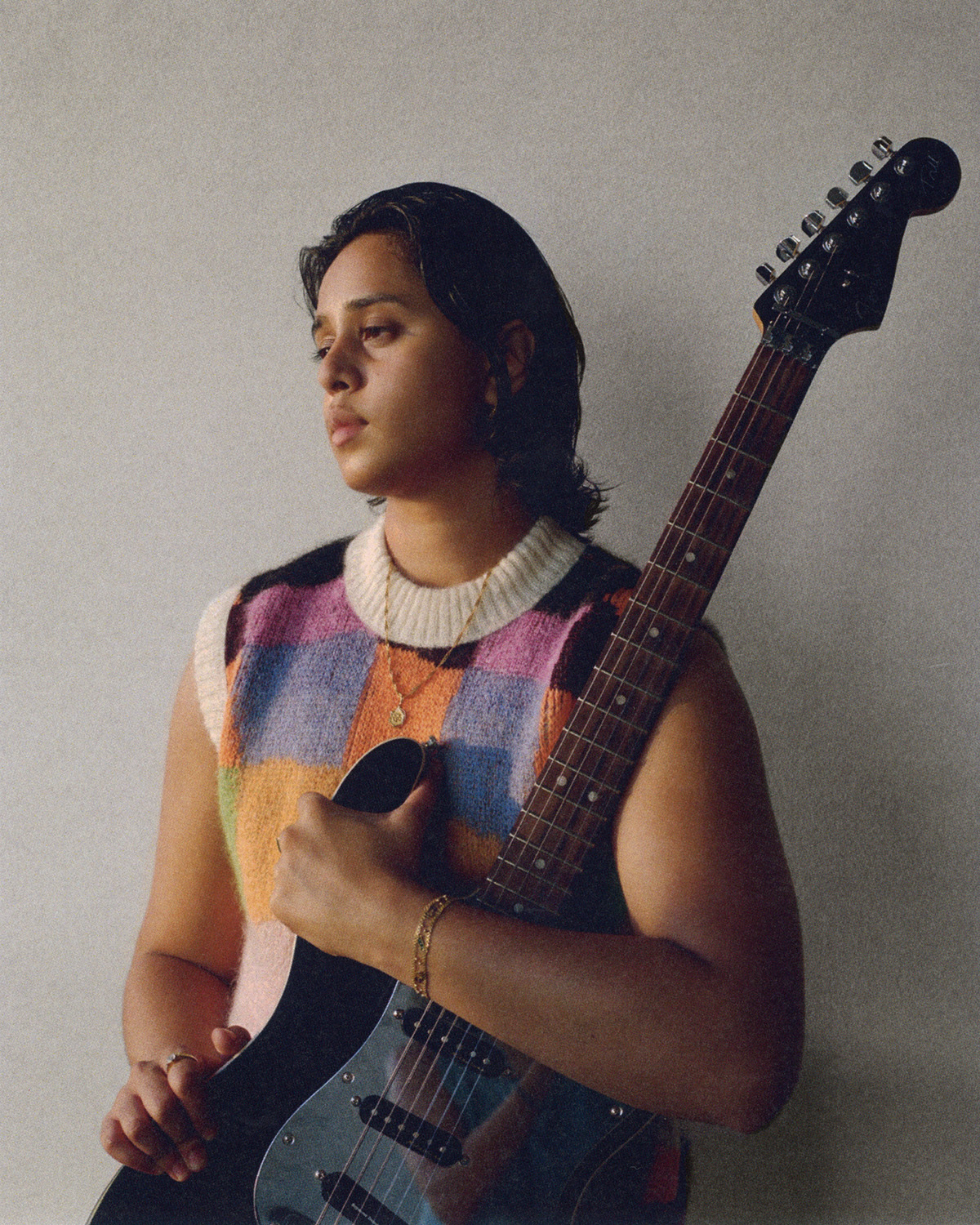 This week, multi-instrumentalist artist and producer Shiva Linga released their 2-track Run Forever EP.  Growing up surrounded by music, their deep-rooted connection to sonic healing and exploration informs a boundless communication not only to their inner self but to generations prior. With early beginnings in Indian classical vocals, sitar and electric guitar, Shivani just wanted to create sound.

Motivated by love and pure curiosity, their music reflects a life in tune; an endless pursuit of greater understanding, self-realisation and interconnectedness. In this exclusive interview with Teeth Magazine, Shiva Linga speaks on the power of frequencies, sonic warfare, and music as meditation. 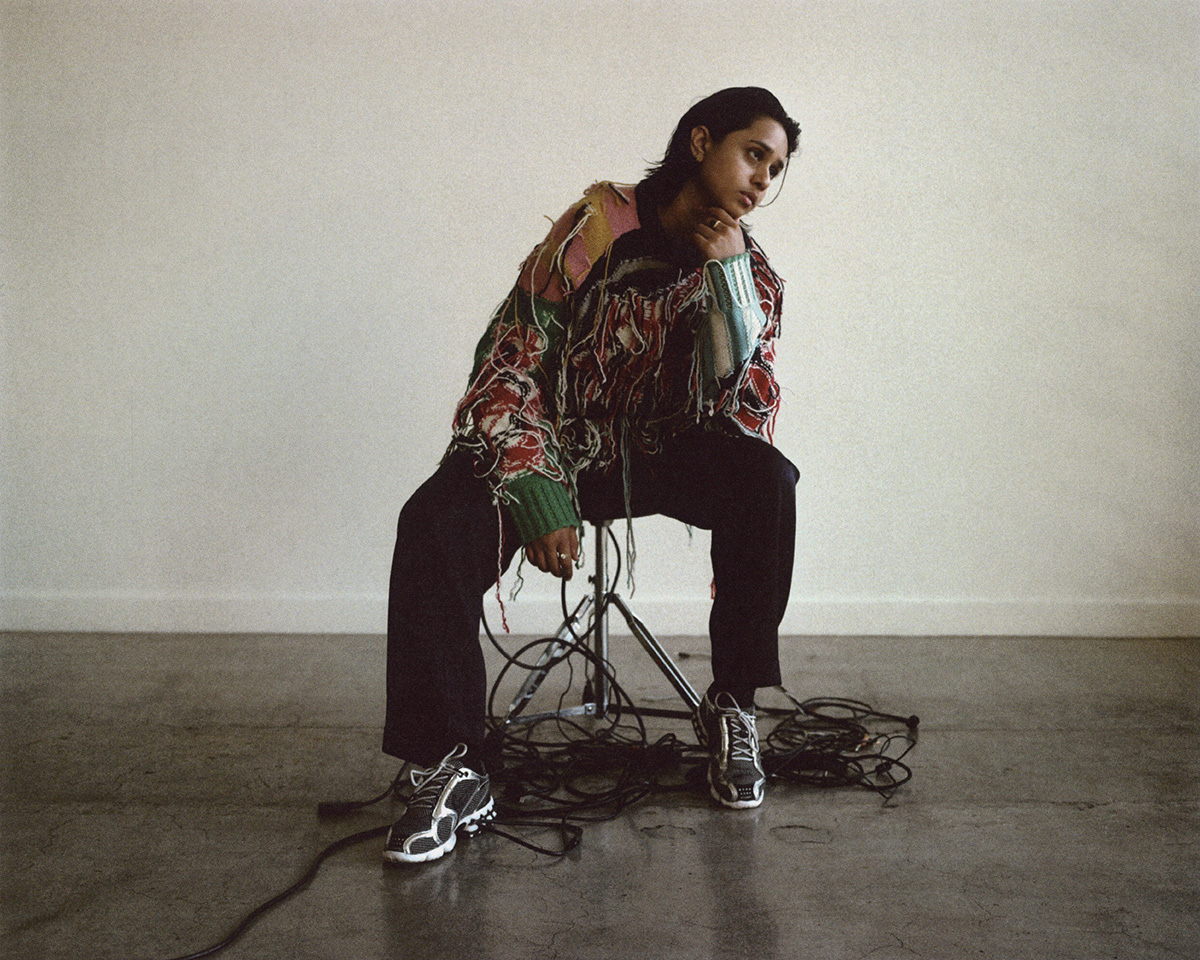 Silken Weinberg: They say thinking is the best way to travel, where are you mentally right now?

Shiva Linga: Yes. I definitely feel like I’ve been taking the opportunity to travel inwards more, it’s been helping me shape my vision of the future. Just kind of diving within myself and thinking about what I’d like to see.  There is so much I want to learn right now.  I’m just kind of narrowing down and focusing on what knowledge I want to acquire, and how I can use that knowledge to make my visions of the future possible.

What is your relationship with music as a meditative practice?

Music was introduced to me as something spiritual, ever since I can remember. Sound just really resonated with me; even when I was a kid, I didn’t have a journal, I had a cassette recorder. I would go around and capture myself playing [the] guitar, or just with my friends, I’d have all these little conversations, all these memories captured with sound. So, I think music is just a huge way of communicating.

I grew up in Ohio and I started learning Indian classical music as a kid. At the time, music to me was just the prayers that my grandma would sing or the Ghazal music that my dad would play around the house. I feel like learning and practising that music is really such a meditative practice for me. Just setting up a drone and locking [it] into a pattern, letting your mind focus completely on it. It’s like a really special thing.

Do your parents enjoy the music you’re making now?

I feel like they really like to hear when I play Indian classical music. I don’t really show them much of the other music that I make; I feel like they’ve heard it but it’s just so queer. They don’t necessarily know that I’m trans or that I’m on hormones, or that I use they/them pronouns so I feel like there are certain parts of myself that aren’t fully shown and one way to show it is through my music. 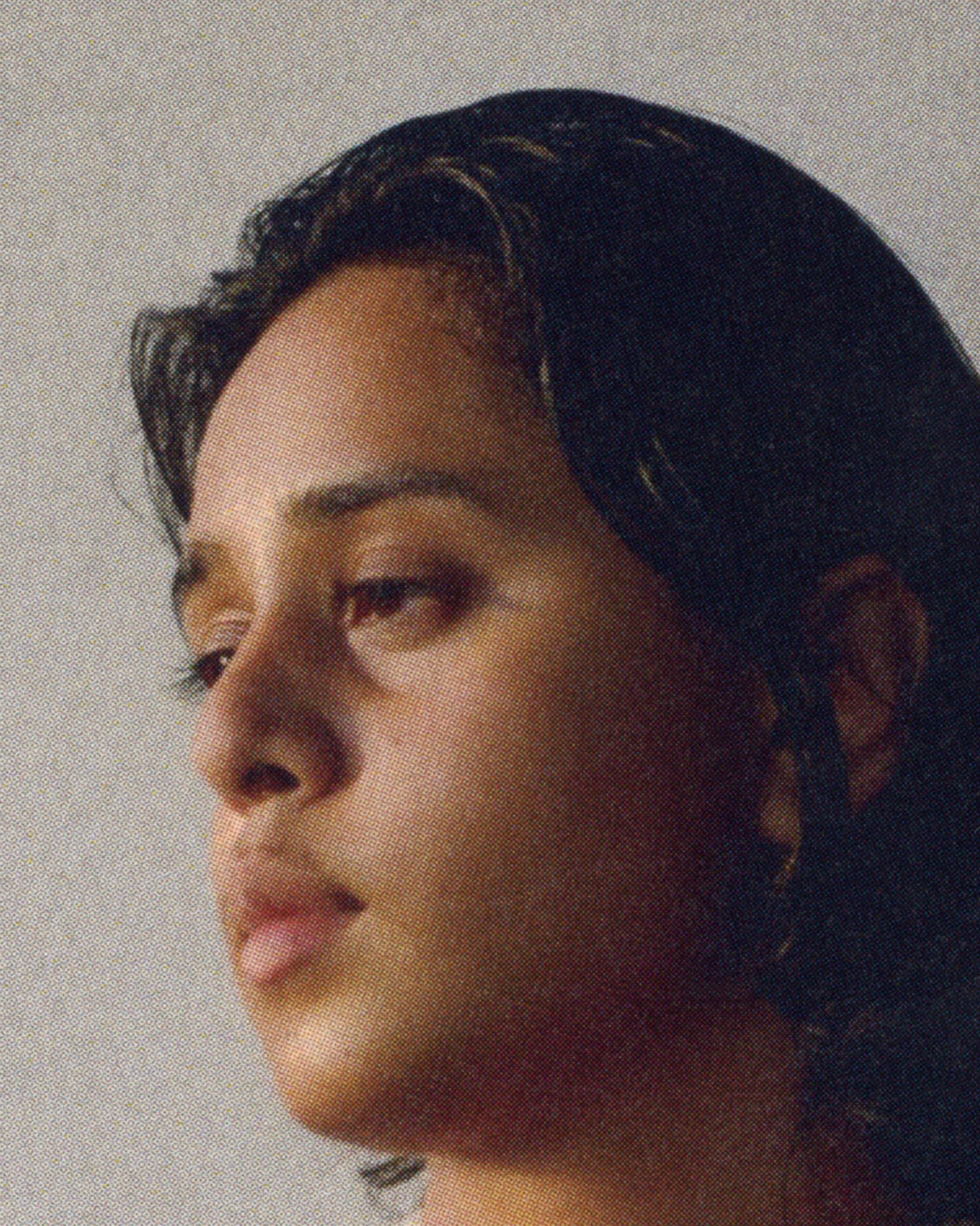 Is music a form of self-realisation for you?

I definitely would say that music is a form of self-realisation for me, and I think that comes into play with all the micro-decisions that you have to make when you’re creating something. There are infinite possibilities, but who are you? Whether it’s choosing a guitar pedal or choosing a snare hit or what kind of baseline you want, you have to choose what represents you. You have to trust your intuition, what you feel drawn to. It’s kind of like putting a signature on something.

Would you say you’re a decisive person?  Do you follow your immediate instinct or mull over the little details, the .5?

I think I might be a little bit of both…I’m a Gemini. A pretty chill Gemini though. It’s a mixture, but I think maybe both are necessary for me.

What was your process like when making the Run Forever EP?  How did it differ from Cosmic Foreplay?

They were created pretty back to back, but the Run Forever EP was recorded during the first lockdown.  It came from a place of expressing the need to heal and kind of check-in with yourself.  Creating and producing it offered me a chance to reflect, relax and kind of melt away into the sound. I think that’s what it can offer to the listener as well.

It’s interesting because my voice has dropped so much since I made Cosmic Foreplay. Even since I recorded Run Forever my body is just changing so much, so that’s another way where I’m relearning how to use myself as an instrument. It’s exciting, with a lot of the new stuff I’m making I’m just exploring new ranges of my voice which definitely feels good, it feels very vulnerable too. With that live performance I recently released, I was going through a huge voice change during that time. My voice was cracking, with almost every sentence I made, so it was really vulnerable to record that.

It’s significant to capture the process; doing yourself justice by exploring who you are is the ultimate freedom and you’re sharing the process sonically.

Yes, even though I was not 100% comfortable I thought it was necessary and important because it doesn’t sound perfect, it’s a work in progress. I think that if other queer and trans people are listening and seeing that, it’s like, ‘wow, somebody doesn’t have to wait to fully transition to start using their voice.‘  You can kind of see me struggling through it and that’s just how it is, I wasn’t too precious about making it perfect. 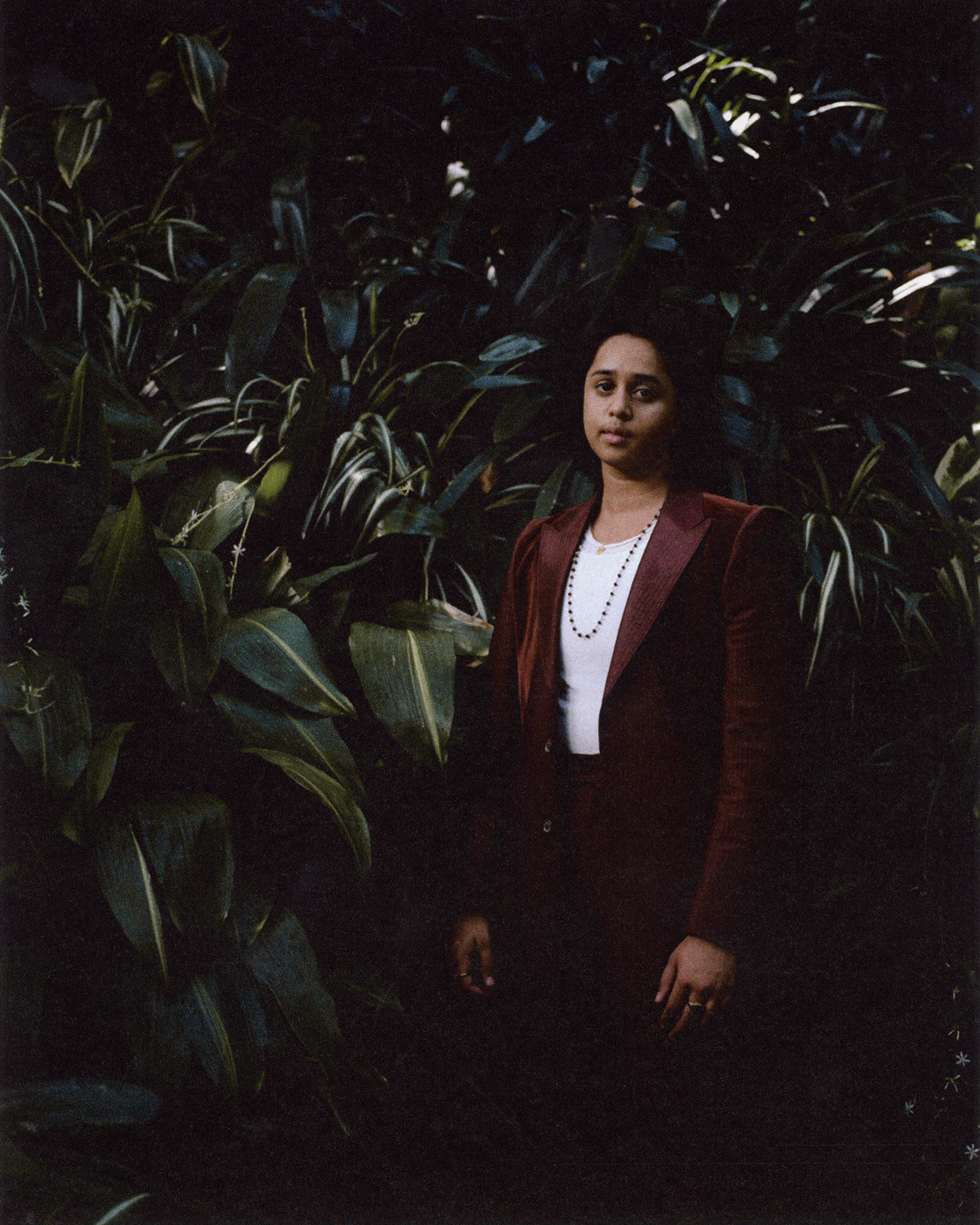 Let’s talk about Sonic Warfare and the reclaiming of sonic warfare as healing. How did this notion begin for you and can you unpack what this means; especially in relation to the queer and trans experience?

Right now it’s an ongoing research project that I’m taking my time to research and understand completely.  It kind of started when I was young, I’ve always been interested in healing frequencies. It’s something I spent a lot of time studying on my own in high school.  Even with Indian classical music, each scale was studied thousands of years ago and each scale has a specific time of day or season that it should be played. When I learned that I kind of thought, wow, this music was really thought through with such intention and had a common goal to help us resonate with each other and to be in alignment with our planets.

When I was in Ohio, I had a couple [of] sound bowls from India and I had this one experience where I was making a song, just randomly recording a sound bowl to add to something with the intent of making it a background, low volume sound. When I listened back to mix it, it was really loud, and it struck me. I slipped into meditation and was like, wow, I didn’t even mean to do this…I realised the power that music had, and I kind of kept it in my mind ever since. From there, I started experimenting with non-standard tunings on my guitar and later on I built a homemade cymatics generator, cymatics is just the study of waves. So basically, I had a bucket with water in it, and I had a speaker underneath it so I could type in a frequency and then see the shape that was created in the water. That was mind-blowing to me because that was the first time I was actually able to see sound.  I realised, okay if this was happening in the water, in the bucket, our bodies are 70% water…so when we’re at a concert when we’re in a car, the sound is creating those shapes within our body.

As a queer and trans person, there has always been some kind of disconnect between my mind and my body. That kind of made me think that we are more so the shapes of the water within our bodies than our physical body and it allowed me to think of myself as fluid and always changing. It was such a shift in how I viewed sound, as I started to realise the meaning behind sound as a universal language. On the other hand, more recently I began to realise how sound is being misused currently and the issues that arise from that misuse of sound.  Whether it’s the police use of sound or military use of acoustic force which can literally shatter ears or the capitalist production of culture and music. Reclaiming sonic warfare, as healing for me, is expressing the need to imagine a safer Sonic World for everybody.

What role does love play in your life?

Just how I think of sound and frequency, I also think of actions in terms of frequency.  To me, gratitude and love are two of the highest and most powerful frequencies to resonate with. If I can imagine making every single action with love, it’s almost like a constant meditative state. At a certain point in my life, I kind of stopped being like, Oh I’m gonna take 30 minutes just to sit under a tree and meditate…I was meditating while I was doing everyday tasks because it felt most natural.  I think a lot of my music is about love and relationships and sex even, I think it’s my raw expression of the kind of love that I experience.  It’s vulnerable, it’s rewarding, and it’s psychedelic in a sense; I think that reflects in the sounds that I create. I feel very blessed to have the gift of music and to have been passed down this gift. I also almost feel an obligation, or an intense desire to carry this music into the next generation.  I feel a lot of love when I’m practising and learning because that’s the way I’m showing my love to my family.  I’m carrying that knowledge into the next generation. I feel very blessed to have just such loving and meaningful relationships in my life.