Lighting the way: An interview with Lava La Rue 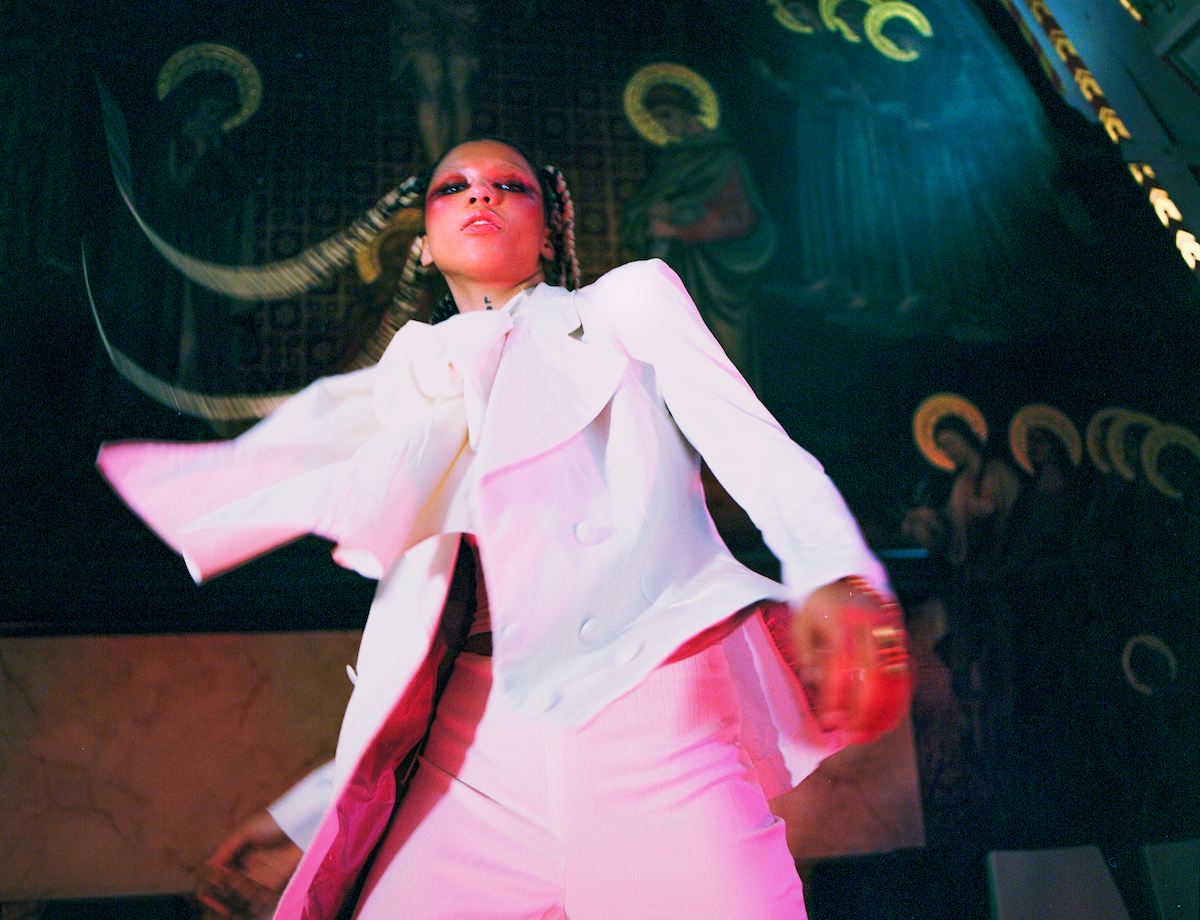 Multi-hyphenate talent, musician, singer and artist, Lava La Rue has covered immense ground in her 22 years. Lava’s unique ability to curate and cultivate a collective mindset brings forces together for the sake of the greater good and speaks volumes to her boundless creativity. As the founding member of the creative group NiNE8, Lava makes an impact in music, fashion, and art alike. From a show at Men’s Fashion Week to a TATE Modern “LATE” takeover, Lava is a bright light in the UK creative scene and quickly gaining well-deserved recognition in creative scenes worldwide.

Lava’s newest single “Angel”, featuring friend and collaborator Deb Never purely and psychedelically embodies the positive spirits they effortlessly emulate. In the midst of a dark year filled with political unrest, pandemic lockdowns and uncertainty, it has become even more clear that necessity is the mother of invention; Lava La Rue is pioneering a new way of creating with the collective in mind. 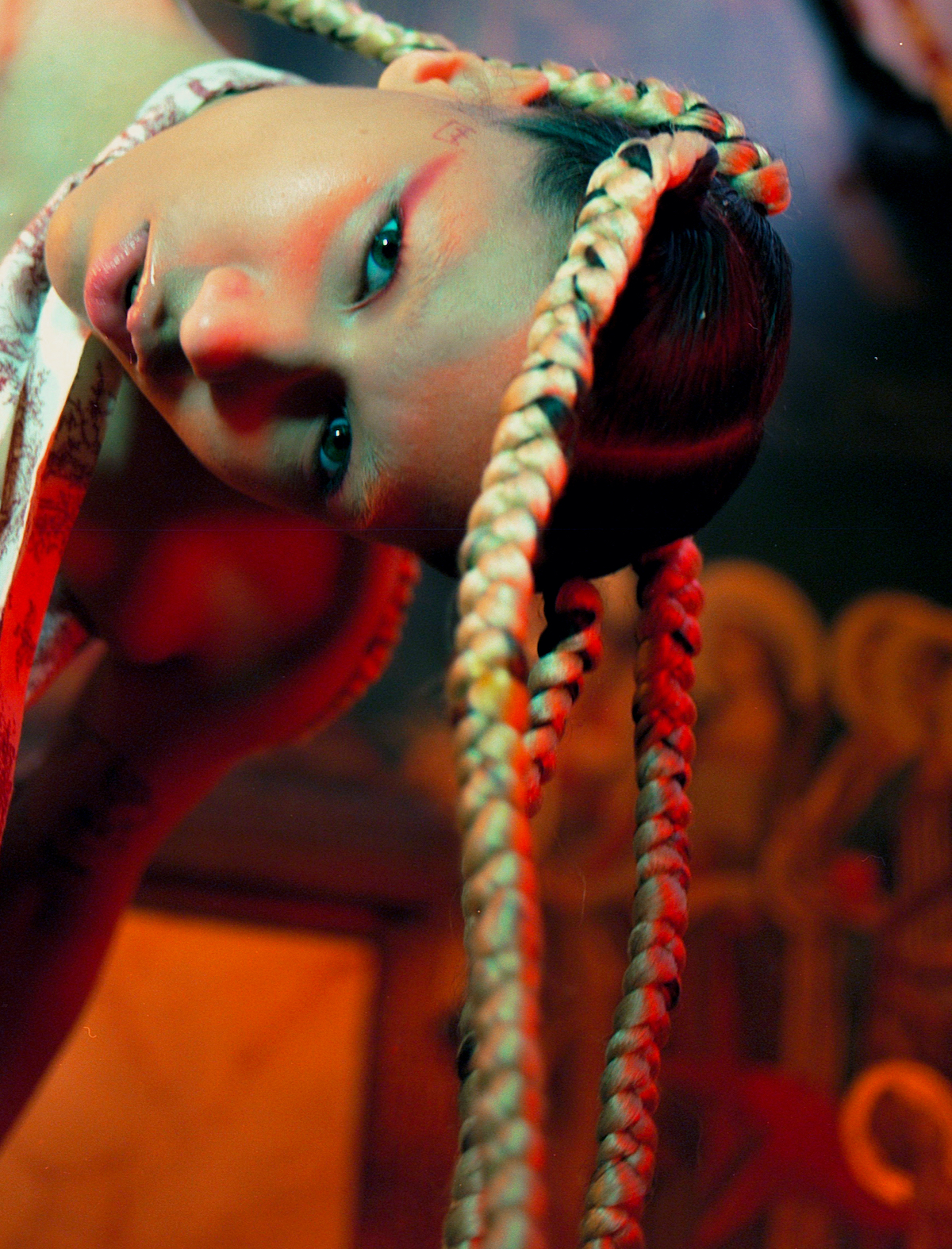 How did this all start? Were you always drawn to music?

Yeah, I think because I grew up with the Jamaican side of my family it was very inherently musical, everything is a bit of a song and dance when you grow up around Caribbeans. Even with daily activities, you’re singing or you just wake up every morning to really loud rocksteady and reggae music, then go to a Gospel Church on Sundays. So it was definitely always around me. I was around a lot of culture and just kind of had to sing whether I wanted to or not.

Was there a moment where you felt committed?

Yeah, at one point when I started going into my teens I just wanted to somehow channel and express what I was going through. That’s when I actually applied it and decided that’s what I wanted to do full time.

Let’s talk about Summer of Love 2.0 – do you think this concept will carry on into winter and beyond?

Yes, I think it’s all about mentality even despite everything that’s happening around the world right now.  All of the free love movements and the Summer of Love movements were firstly and inherently political and nothing’s changed on that front.  Looking at the crazy things that have happened politically in society, they spark all of these subcultures that we’ve seen in past movements. If anything, the more hostile the world gets, the more there’s going to be a need for these kinds of things, so that’s why I don’t feel so negative about it. 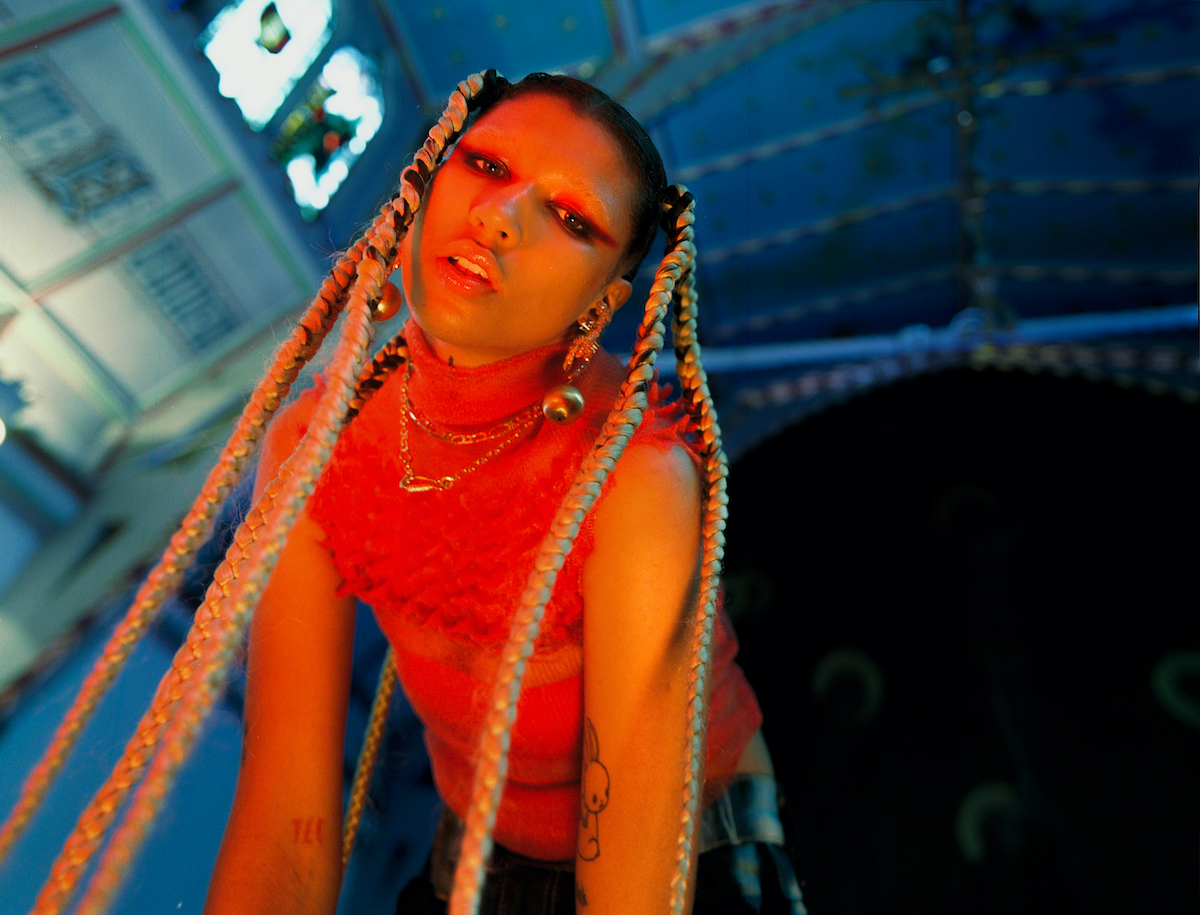 Looking at NiNE8 and your sense of collaboration, what role does community play in your own creativity?  I can’t help but feel a really special sense of collective growth and inspiration happening at this current moment.

I agree.  I think the idea of a collective for a lot of people is crazy or seems like such a progressive way of thinking but that’s exactly how artists used to do it, they used to function in collectives. It’s actually kind of an old mentality, communal living and sharing resources. It’s when you get a scene of people sharing resources, they essentially create their own viable aesthetic that becomes recognisable to the point where you can identify a sound or visual and pinpoint, when and where it happened, ‘well this was the experimentalism that was coming out of France in the 1930s… and that was pivotal for this to progress arts in that way etc.’  We’ve been taught so much individualism as of recent, to do this for yourself, pop off on social media and TikTok, go get that bag and fuck everybody. And I’m like, no, everyone should love each other, if we do this together, we can get further. That’s not a crazy progressive notion, that’s just in my opinion the most effective way to create longevity.

You really help light the way in terms of how our culture attempts to ‘navigate’ these times, where do you find your energy?

I think that energy comes out of necessity, it’s just a form of survival. I know that sounds really extreme but to be honest, I feel like I kind of work better in a harsh or high-pressure environment.  From a young age, I was already aware of the things that are in question and in the conversation now;  being a young queer, non-binary, working-class black kid, every possible thing that when you’re in school you have to fight to explain and hold your ground on, I’ve already had to do that. So now doing that in music, I’m like, listen, I already went through this and teenage kids are so much more harsh than a lot of these brands or labels, this is water off a duck’s back in comparison to the stuff I had to deal with in school, the bullying. There was no ‘cancel culture’ or anything like that, you just had to hold your ground. So with my music, I just want to give that same strength to the kids who are in my position.

It completely fell into place. It all came about with the whole Summer of Love project and was an addition to the “G.O.Y.D.” song that I put out. I wanted to contribute to something and I wrote the song with Clairo, who is from Atlanta. We were both like, hey, we should drop a zine with this, drop some merch, and have all the proceeds go to charity. We were really looking for a charity and literally the day we had that conversation, For Our Sibs popped up and was like, ‘hey, we are an Atlanta based organization collecting funds for Black Trans, Non-Binary, Gender Non-Conforming, and Intersex folks.’ They’re based in Atlanta but do work across Atlanta, Canada, and the UK. We were just like wait, Atlanta and the UK? It was a perfect charity and cause to give to.

How did “Angel” come to be?

This specific song I actually wrote and made in LA with producer Isom Innis who, crazy enough, we met in the studio, and thought he was the engineer. He was giving my friends and I the keys to it and we were like, oh, you’re such a nice guy, you’re really cool, we had the same taste in music. When I asked him what he was up to, he was like ‘Oh, yeah I’m just going to band practice.’ I was like that’s so nice of you, what are they called? I’ll check them out! He was like, ‘Oh, Foster the People.’

About two days later, we ended up in a studio session together and in seven hours from beginning to end we made “Angel”, all in a day. We were just super in sync. Then the second time I went to LA, I got really close to my friend Deb Never who is featured on the track.  We started talking about this fusion; that I’m from West London, and this music was made on the West Coast. I feel like this sounds like the west coast of London meets the west coast of America without compromising my Britishness and without compromising everyone based in LA. 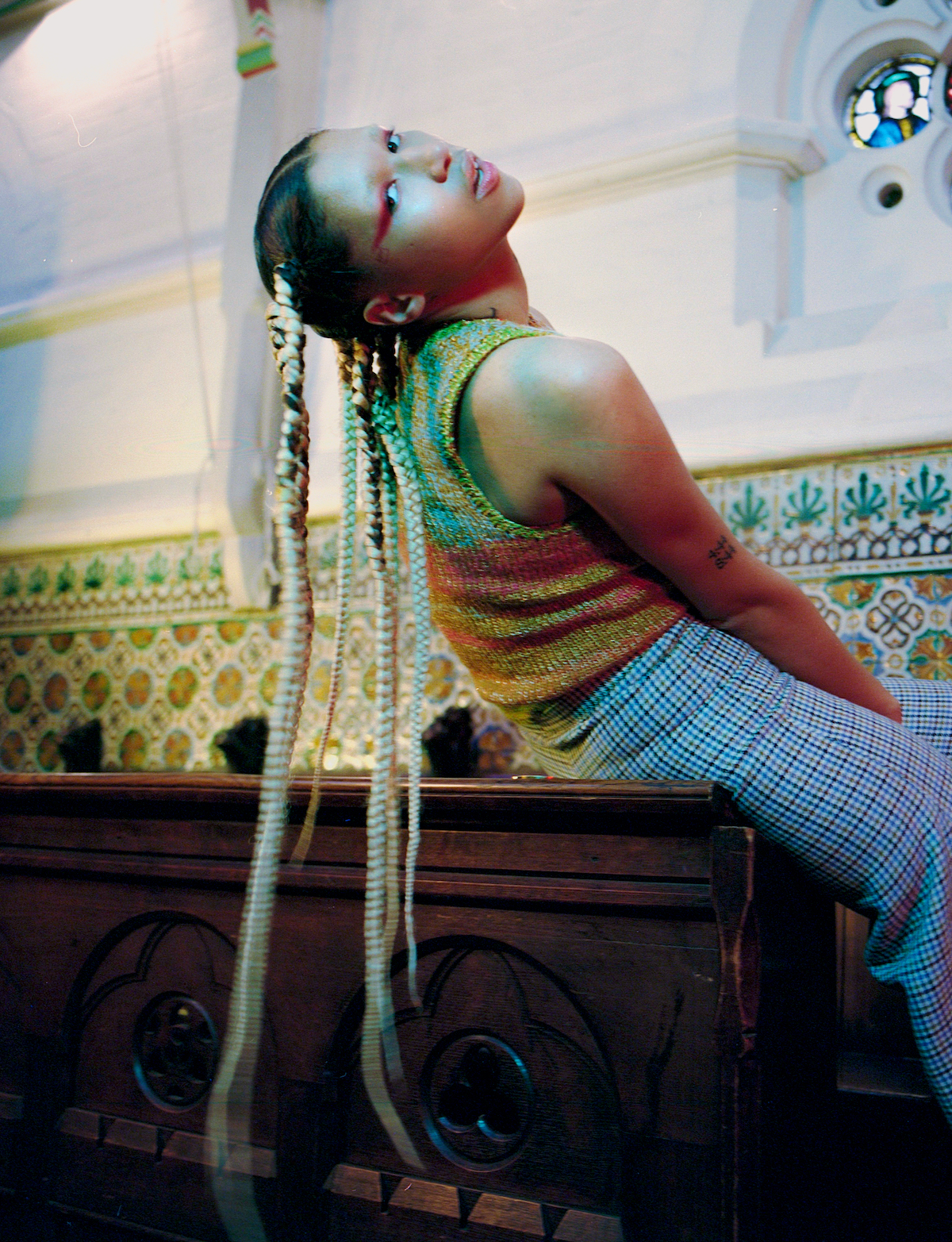 What informs your personal style?

Honestly, just the city I grew up in and the people I’m around.  I’ve recently realised the influences that I’ve had and how I pay homage to past British underground subcultures, like the Rude Boy movement and Two-Tone culture which was the first generation of Caribbeans that came here; mixing the white working class with punks and they made this ska fusion.  It’s about mixing all these things and being really proud of your heritage. This old UK stuff from the ’80s that I’m realising I wore because that’s what I saw my grandparents wear, I’m like, oh my god, actually I look like my granddad’s in the 80s.

What music did you grow up with?

Definitely Gorillaz, the Specials, a lot of rocksteady…Alton Ellis, Prince, and Grace Jones.

The pure, unapologetic brilliance of the greats who have come before us!

Honestly, it’s like a natural rockstar energy that cannot be emulated. And I think in times of social media, it’s hard to pick out what’s real and what’s not, but I’m looking forward to the 2020s to see a decade of the new rock stars. 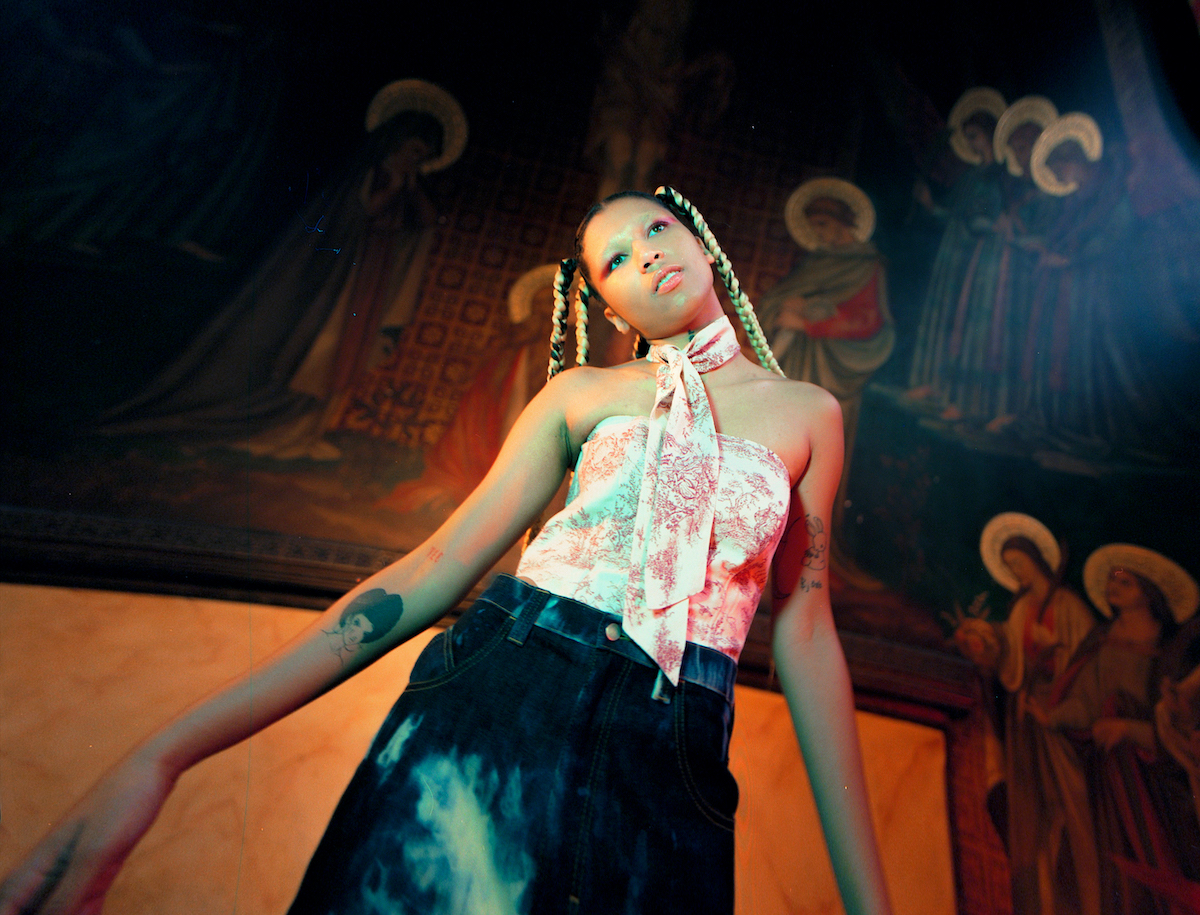 On the outside everything seems so effortless, is confidence second nature to you or something you’ve worked towards?

I feel like it’s something you’re always growing and gaining through life, I think I’ve gone through different stages. When I was a kid, I was super confident, and then there was a bit when I was really shy. For me, it cycles, there was never a moment where I was like, oh, suddenly I’m a confident person. I’ve gained that. I have this reset of cycles and I think everyone has that in a way. When you’re a kid, you’re super confident because you just don’t care about anything and then you start understanding the world, other people’s opinions and become self-conscious then you go through that teenage phase.  Then you get old and stop giving a fuck again, I feel like it’s about recognizing those levels of growth, it’s full circle for me. I just try to be my most authentic self in all places.

Watch the video for “Angel” below and stay up-to-date with Lava La Rue via her Soundcloud and Instagram.