Remember the Dream: An interview with Ionnalee

Silver cape and bodysuit Jonna’s Own

Ionnalee is the latest artistic incarnation of Swedish musician and visual director Jonna Lee, who along with her independent, socially aware collective and label, Towhomitmayconcern, mystified then beguiled the world with pop gesamtkunstwerk, iamamiwhoami. Now, Lee steps forth solo, releasing otherworldly, audiovisual creations that draw millions of views.

She’s one of the most inventive singer-songwriters at work today. Ionnalee has carved out a unique place for herself in the current musical landscape, combining powerful electronic pop with well-thought-out visual elements that you won’t find anywhere else. This has been the case from the outset of her revamped career in late 2009 when she was posting anonymous YouTube videos that got everyone wondering ‘who on earth was creating this stuff’. Through her three albums as iamamiwhoami. Since then, she’s undergone something of an enigmatic identity shift, combining her old and new personas into Ionnalee, a hint that her work is now a bit more personal.

Her latest release, Remember the Future, maintains Lee’s off-kilter, spare approach to pop music while adding a broader one to her themes. She is honing in on a murky vision of dystopia, sci-fi retrofuturism, and the hope that lies beyond whatever misfortune may lie ahead.

Here, we catch up with Ionnalee about her music, fashion collaborations and plans for the future. 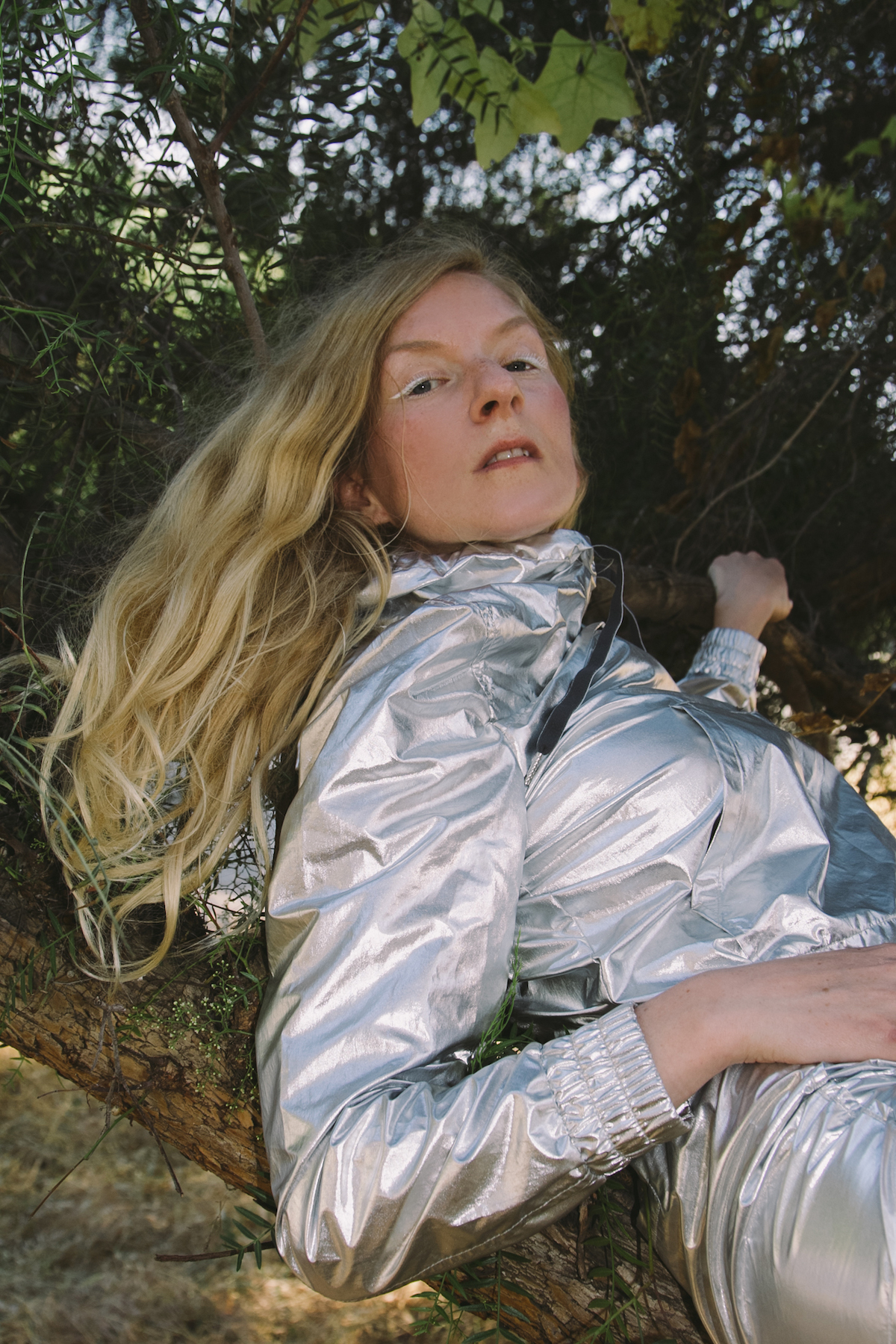 It’s a bit of a blur. My first sonic memory is the “Wolf Song” lullaby from the film Ronja Rövardotter sung acapella by the actress Lena Nyman. I must have been about four years of age, and it has a very typical Nordic folklore tone. Then my mom’s vinyl of Chaka Khan’s “I Feel For You” really stuck to my head. I used it as a soundtrack for giant arena performances at age five overlooking rapeseed fields from inside our living room.

I haven’t figured it out myself. But I know visual moods trigger it, it can be in nature or fictive, well captured on film. Any emotional high or low, followed by some rest, usually brings me to write music. Trying not to be too conscious of these things actually, it should always come from a natural flow.

When it comes to sitting down and writing a song, where do you tend to start? Can you please talk me through the recording process?

Well, I need to have nothing else on my table. Usually, it begins with peace and quiet. Then a beat, or a chord, and then vocal will lead the way to create the melody. I then need to urgently write a sharp lyric so that I can sing it and mean it. Then, I create the full production, exploring new sounds, playing an instrument that fits the vision. When I write with Claes Björklund (iamamiwhoami), we often make little soundscapes first, but it’s quite the same procedure. I spend a lot of time playing with my vocals and love the editing process for any instrument.

Ouch, I have written a lot of music, choosing one is hard. “n” from bounty (iamamiwhoami) has always been a favourite. It just is the anthem of that era, “idle talk”, “chasing kites”, “u”, too. And from my new album, a contender for a favourite song is “Remember the Future”. I wrote it for someone who really needed it. There’s a pop-philosophical flow to the lyrics and melody that I love. It’s really straight forward, and it needed to be. 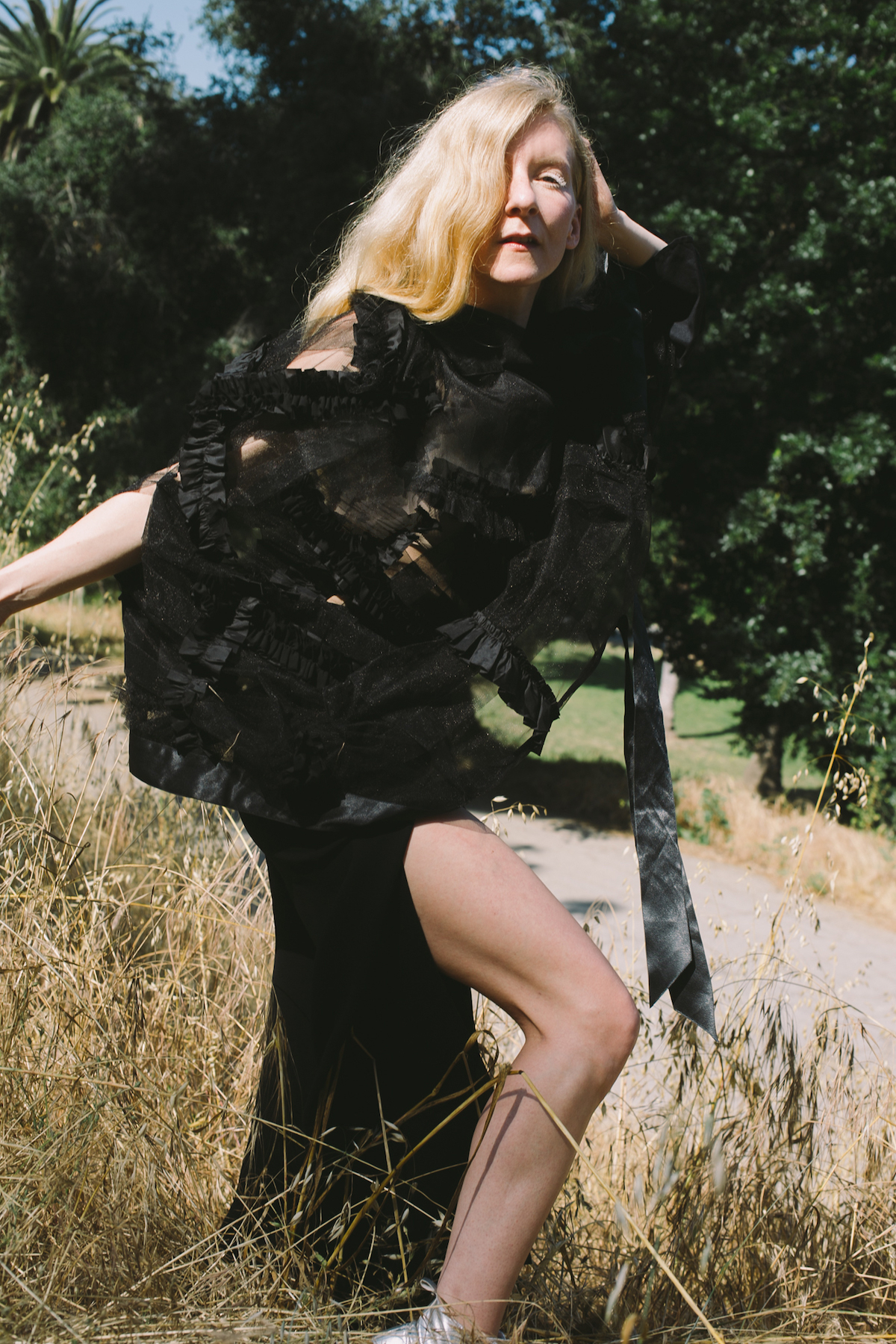 You have collaborated with Comme des Garçons. Have you had any other collaborations with other fashion brands in your visuals? Any plans to do it in the future?

I don’t normally collaborate with brands, but Comme des Garçons I see as artists creating and working similar to me in their industry. Rei is a very inspiring creator, and she and Adrian Joffe push boundaries, not for money but for their art. For live shows and previous works, I’ve made my own wear because I want there to be a solid purpose that fits my visuals, and I tend to break everything on stage being a very physical performer. If I connect with a creator, then nothing is impossible, so there could be future collaborations under the right circumstances.

You have lived in London for a while and said your favourite street there is Portobello Road with its Victorian terrace houses. Could you say what you love about that street? What do you love about London itself?

Yes, I come less often now, but I ran away to London as a teen and started my early adulthood there. It was my first own home, and so I connected with the city. Portobello has a nice touristy flow. Love walking around on streets like that, even here in Sweden, because I find there to be less self-awareness and good vibes amongst tourists. Everyone is just passing through. I have a lot of friends around Portobello and recorded my ‘first’ album in Kensal Rise. Now though, I’m not used to the city buzz anymore. I used to dream about that as a kid, coming from the middle of nowhere, but now even Stockholm seems too much for me.

What was the first significant DIY/independent undertaking you did?

I started a club for independent bands in Stockholm sometime in 2003 because there were no venues to play as an independent or ‘unsigned’ artist as they called it. It began to grow into quite something. Unfortunately, I couldn’t keep it up. I also used Myspace to produce my first album. I met Ed Harcourt that way, and we began recording together for 10 pieces/10 bruises (2007).

Can you talk to me about the creative process behind your visuals?

Visuals are present from the first seed of new music in some shape or form. Conceptually, I build the music and visuals together, and then I have to take turns in working them side by side. I’ll go on what I feel like doing on that specific day unless there’s a deadline. Tend to put up a lot of deadlines to not veer away into abstract where nothing gets finished. John Strandh is an important part of the visual process and has shot all my visuals since 2009. Then, my lyrics are the core of the script, I build from that with John, we plan, produce and eventually film, I edit, and he grades. All this simultaneously while working on the music in the studio. 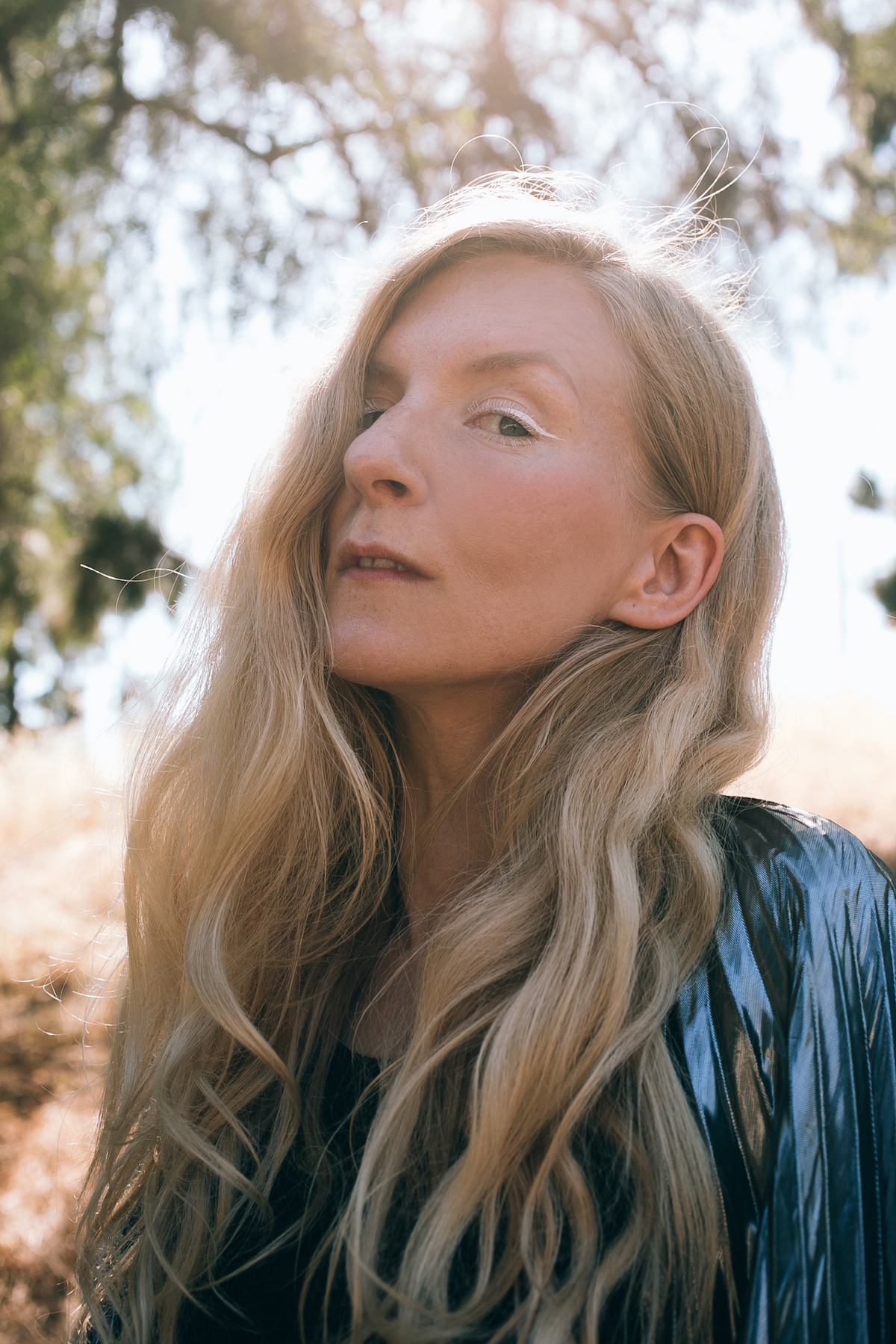 Which visual is most compelling to you?

As far as favourites go, through all the series we have made, I’m affected by the filming process. So, I’m not objective in terms of results. “FOUNTAIN” was very powerful (and cold) to make. Love what “SAMARITAN” became, and “t” is very special to me. I can say that all visual productions are really straining but wonderful. The ideas are always prioritised over comfort, so whatever the conditions, if it’s in the script, we make it happen. Usually, we are always without the ‘usual’ comforts of heat, stylists, assistants. We all carry gear up on steep hills and clean mud from the cables afterwards.

Walk me through your latest release, Remember the Future.

I began writing it throughout 2018 in-between touring without plans to make an album. It was more like an escape to release all the intense impressions from my first world tour, meeting my fans in new places for the first time, which then spiralled from inspiration. Eventually, I found myself with a lot of new music made very effortlessly comparing to what I’m used to. Like I needed to write it to share. This album is perfect in capturing my current mood and status before my artistry, and as an individual living on a planet, we are rapidly consuming.

What sort of emotion do you attach to your music?

All kinds of things spur out of me. There’s melancholy, a lot of warm glow and a chafing evil in me too. 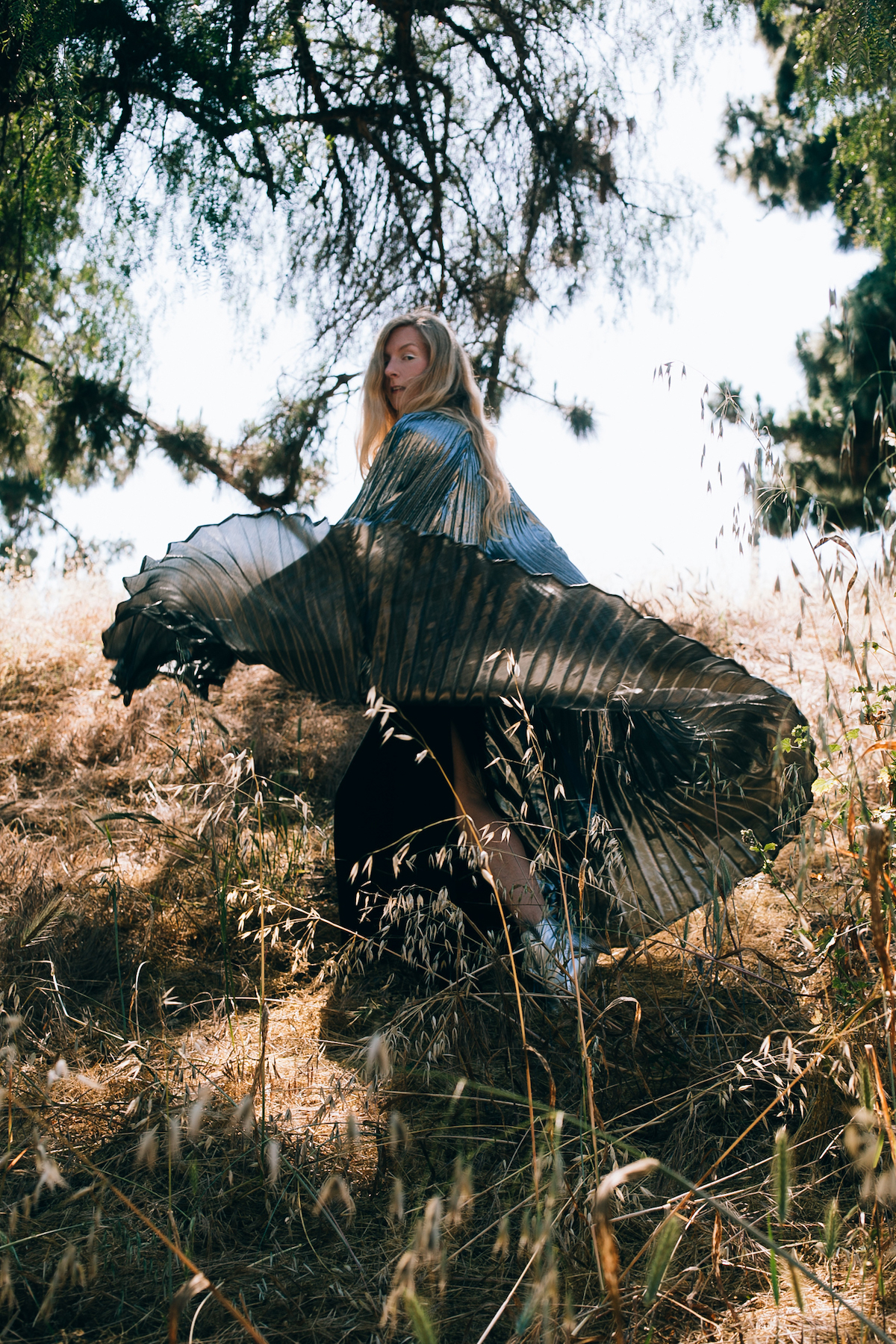 How did “SOME BODY” come about?

Claes Björklund (iamamiwhoami colleague) and I wrote a few songs together on this album and “SOME BODY” is one of them. It’s about society holding onto the past, and how hard it is to be heard as an independent musician when you’re delivering an alternative point of view in terms of message and method.

Finally, what’s happening for you next?

I’m going to rest a little if I can. This year marks an intense ten years of constantly creating and releasing. After the summer follows the REMEMBER THE FUTURE EU TOUR this fall which I’m really looking forward to. The future’s still unseen.

You can listen to Ionnalee’s full album, Remember The Future, below: