Sweet & Sour: a review of The Dot Project's 'Candy' exhibition 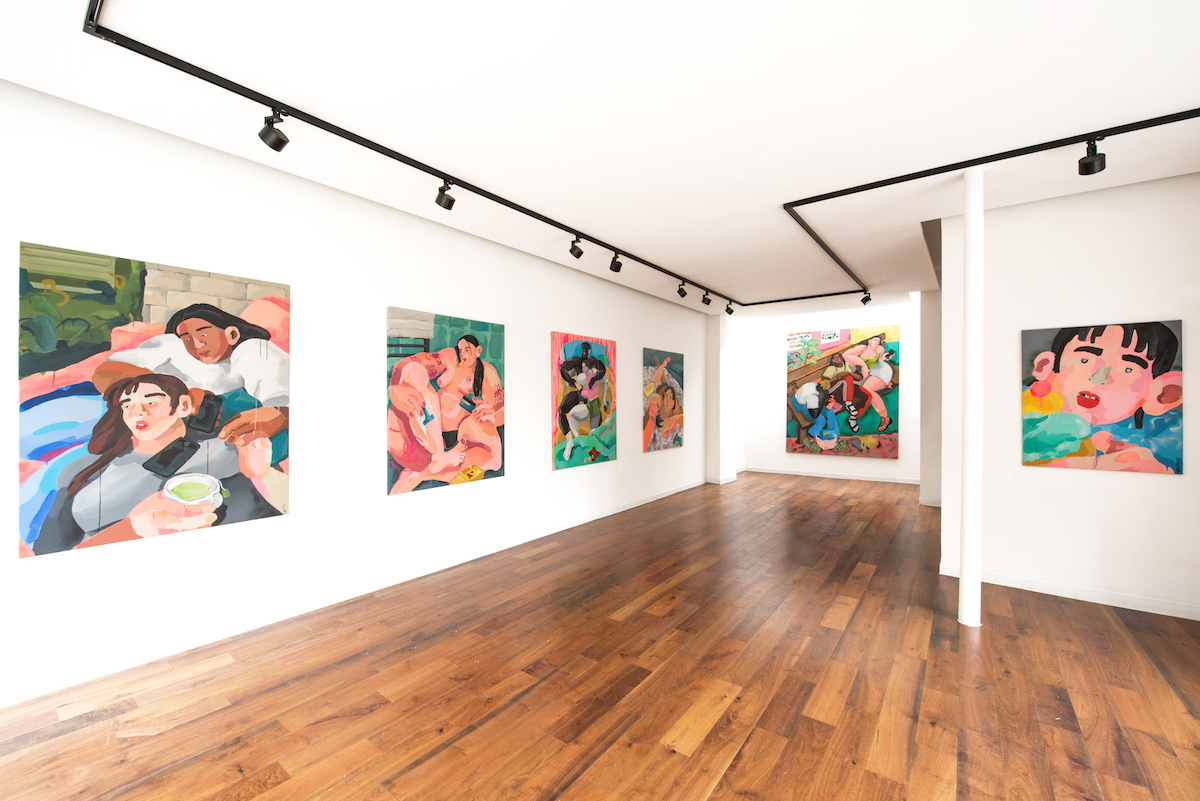 If ‘Candy’, The Dot Project’s new exhibition, were a sweet, it would be a gobstopper: a cacophony of bright, childlike colours slowly dissolving to reveal layer after layer of thought-provoking messages and meaning. This dual show tackles the daily struggles and contradictions of being young in the 21st century: Hope and despair, apathy and passion, connection and loneliness.

Walking into the sunlit gallery in Chelsea, Cristina BanBan’s alluring canvas’s bejewel the walls. BanBan grew up in Spain but now lives in London, and her paintings depict the banality of her world. Think of everyone you know who rents a flat in East London. BanBan has created a portrait of the society she lives in, which at first seem unremarkable, but by painting her characters she processes and filters this generic imagery, adding intimacy and a personal touch which adds an autobiographical tone. Her canvases are filled with voluptuous bodies engaged in familiar activities, like watching tv while scrolling through social media in Inbox Checker (2017) and waiting for food at a takeaway shop in Cash Only (2017). However, BanBan brings her characters to life by adding dimension to their relationships with themselves and each other that will resonate with anyone living in today’s over-stimulated and underpaid society. In Shopping (2017), Banban paints a woman simultaneously shaving her legs, eating chips with one hand, and paying a bill with credit card in the other hand, her phone squished to her ear. Banban tackles our constant occupation with technology by showing many of her figures distracted by their phones, even in the most intimate of scenes, like Sunday’s Babe (2017), an otherwise romantic view of two men lying in bed together. The presence of food and technology as continuous motifs echo our consumer-driven lives. 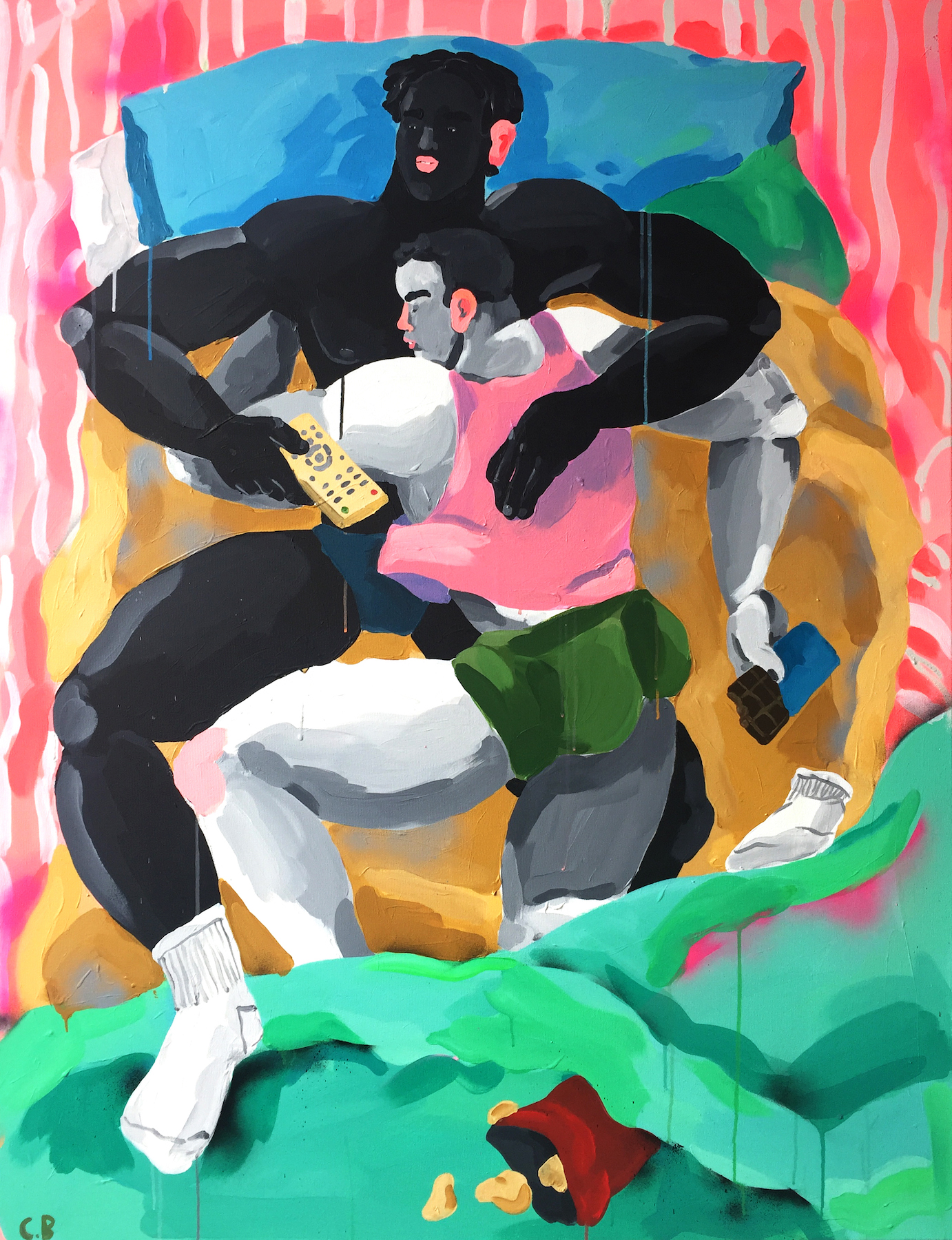 Banban uses intoxicating shades of bright, playful colour to illustrate her figurative, Matisse-like characters in familiar environments, contrasting the dreamy with the everyday. She communicates her frustration in her subject matter by using layers of acrylic paint and spray paint, and an additive and subtractive process, creating tension in colour, texture, and form. Whilst being very modern, her work seems to echo a Renaissance sensibility of portraiture. It feels as if each character is a dear friend that she knows and has studied in an effort to capture their essence, creating warmth and depth in her narrative. While expressive and underlying with a sense of irony and criticism of how we interact with the world around us, BanBan also sends a message of hope: multi-cultural same-sex love, enduring friendships uplifting us and getting us through the trials and tribulations of every day, and the strange beauty of the urban landscape. 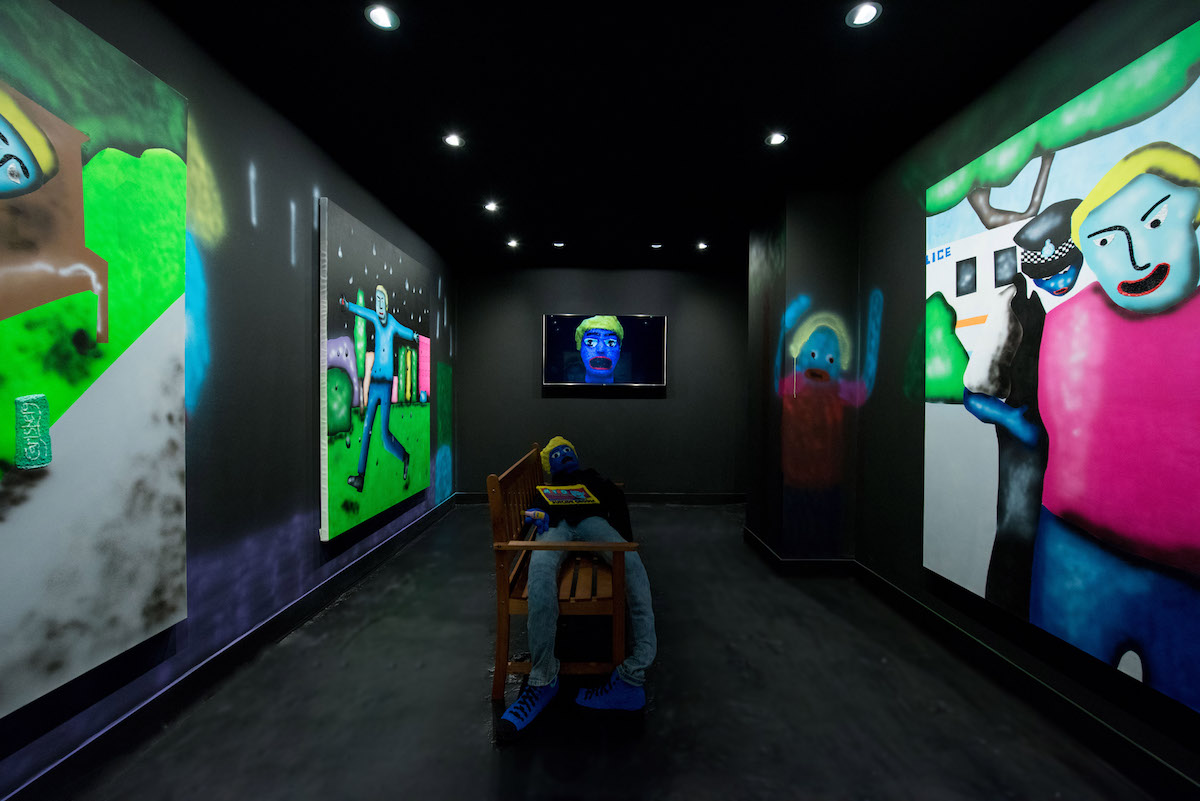 In the gallery’s basement, Dominic Dispirito’s works loom out of the darkness of black-painted walls. Six years sober, Dispirito’s work is autobiographical, dealing with his battles with alcohol addiction. The English, London-based artist works in a variety of mediums, and in this exhibition, he displays sculpture, video installation, and canvases layered with acrylic paint and manually printed PLA plastic, the same material he uses to make his sculptures. Making this plastic into sculptures is an excruciatingly long process, with one of the Converse shoes in his sculpture, Really pissed again (2017), of a cartoonish version of himself passed out on a bench, taking up to 10 hours. The role of analogue creation vs technology plays a crucial role in Dispirito’s creative process. All of his works are first sketched out using an iPhone app, and he uses materials to mimic the colour and textures of our everyday technology. The figures he depicts are simplistic in a recognisable, slightly chilling way, with harsh non-naturalistic forms that are humanistic but also robotic. He juxtaposes non-naturalistic colour in a jarring and aggressive manner. His works are hostile yet beautiful, and quite overwhelming. 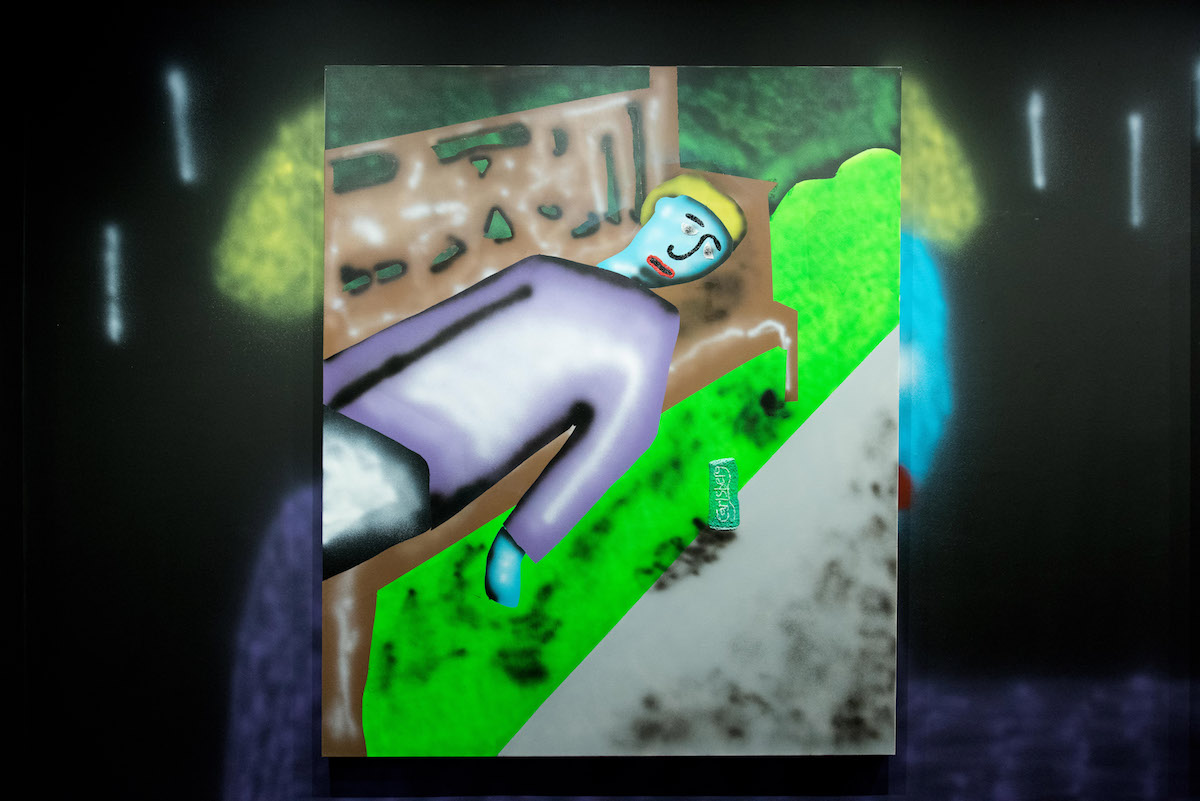 Although solely dealing with his own drunken escapades, Dispirito’s work resonates universally. We all have one vice or another and have either struggled with addiction ourselves or know of someone who has. Dispirito’s work seems to be a therapeutic outlet for him and a way of reflecting upon his life while trying to reach out and convey his story to the world. With anxiety and depression rates soaring, his work may not be as pleasant to view as BanBan’s, but it resonates deeply with the overwhelming feeling of loneliness and the pressures of modern life and how many of us deal with it by substance abuse or some other form of escapism, further alienating ourselves and damaging our relationships.

The work shown in “Candy” can seem slightly depressing. Our modern lives eclipsed by distraction, isolation, and, in some cases, intoxication. But underneath the layers of heady colours, exaggerated shapes and casual interactions lie a beautiful and uplifting portrayal of the world as it is now. Both BanBan and Dispirito use their art to communicate a message that, although depicted with a self-aware and ironic tone, shows that we are not alone in our emotional journeys and that the present is to be acknowledged and celebrated.