Montolieu: A Village (of Books), Outside of Time 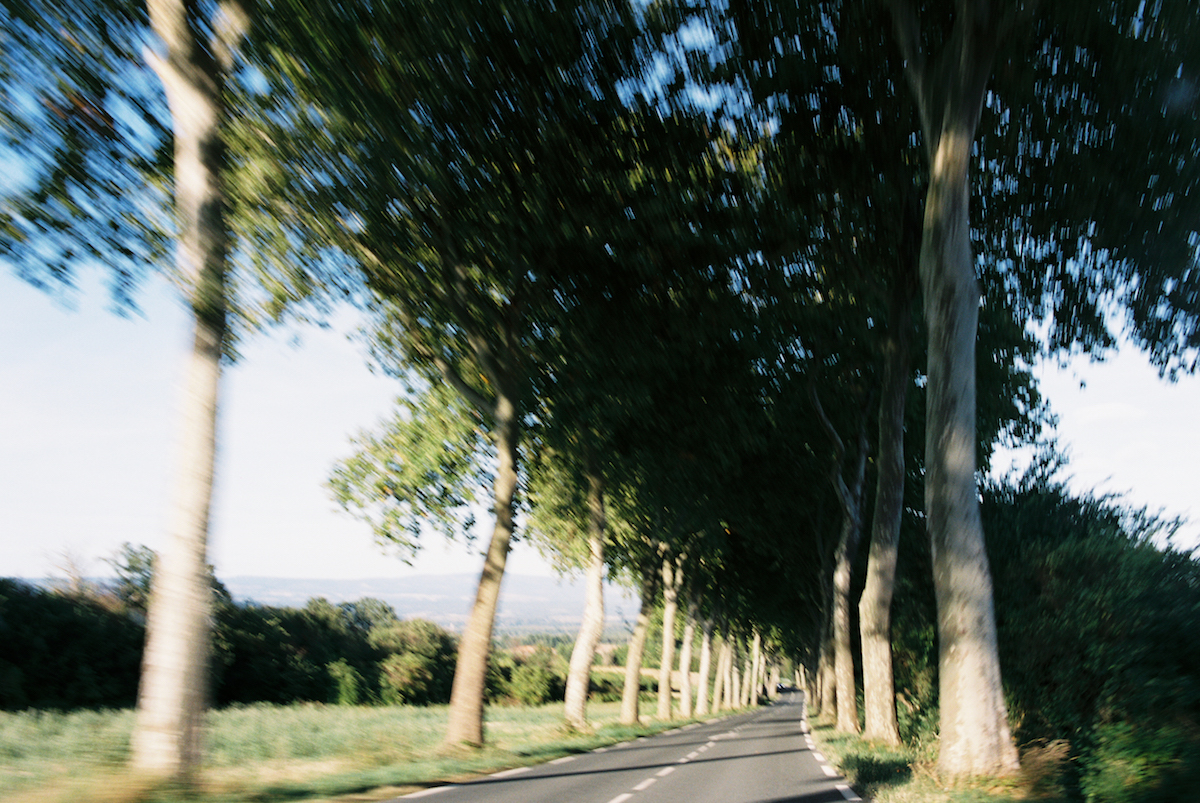 The road that stretches from Toulouse to Carcassone in the Languedoc region of southern France is vast and winding. Outside the car, reels of dusty, gnarled vines planted in rows flicker past, alternating with broad, tall plane trees with puzzle-patterned bark and yellow leaves that create a canopy of filtered sunlight over the road. The dark and rolling shapes of the Black Mountains set the backdrop of this scene to the north, and the green, jagged peaks of the distant Pyrenees Mountains border the horizon behind. The sun was high and still in the haze of a dry mid-September, and we were headed towards a village up on the hill ahead. 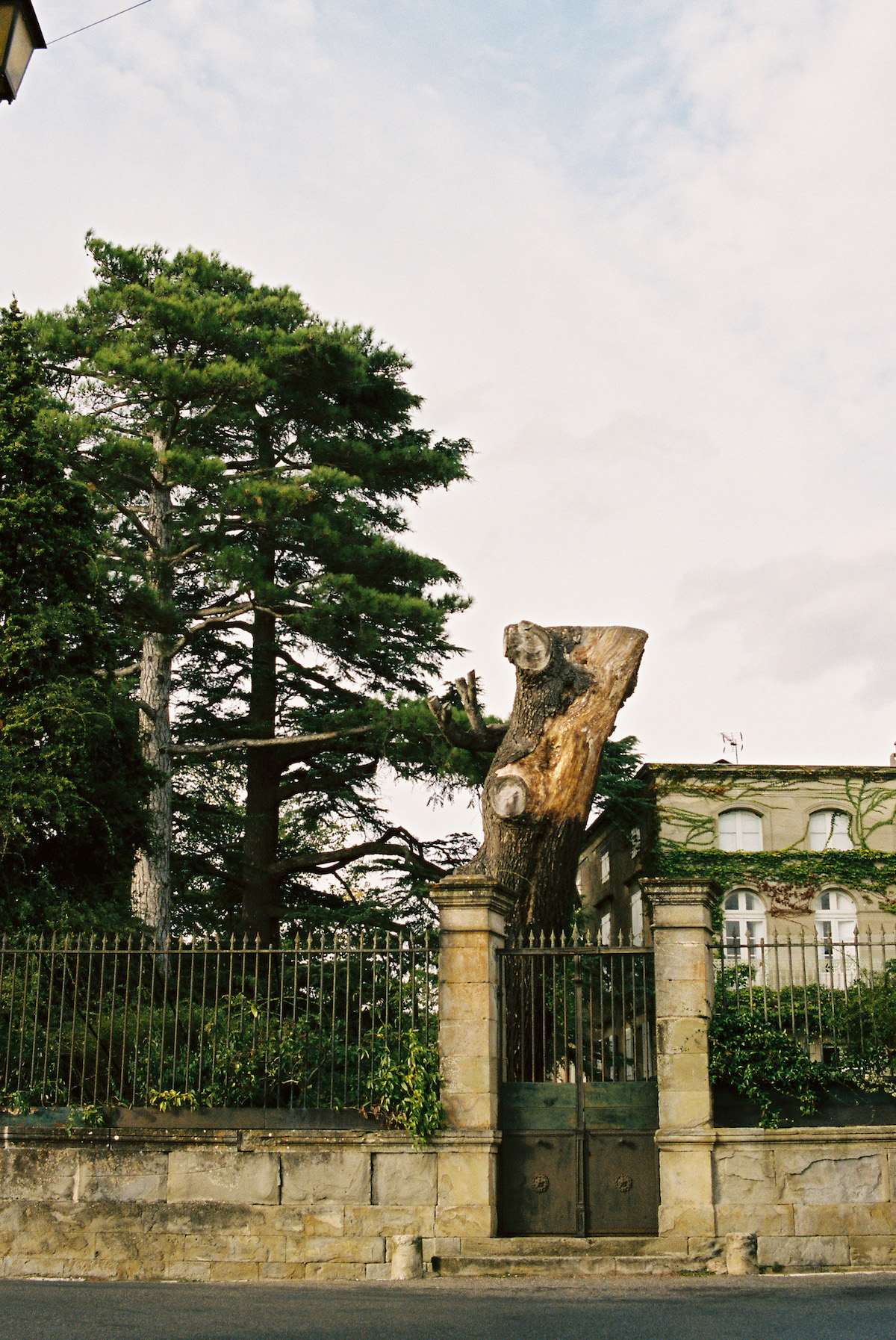 The little town called Montolieu had been recommended to us by the host of the vine-covered and enchanted bed and breakfast with an almost hidden entrance that we arrived to in the nearby village of Montréal (the other, other Montréal). After a five-hour pre-dawn train ride from an already awake and scurrying Paris; here, it was silent, as if everyone were either still sleeping or out in the vines, busy with work. We had dropped off our bags and asked to be pointed in the direction of wine, and our host disappeared for a moment and then returned with a handwritten map. He traced a line on the page with his fingertip, and then pointed to a small square he had drawn and said, “visit this place: it’s a village of books.” 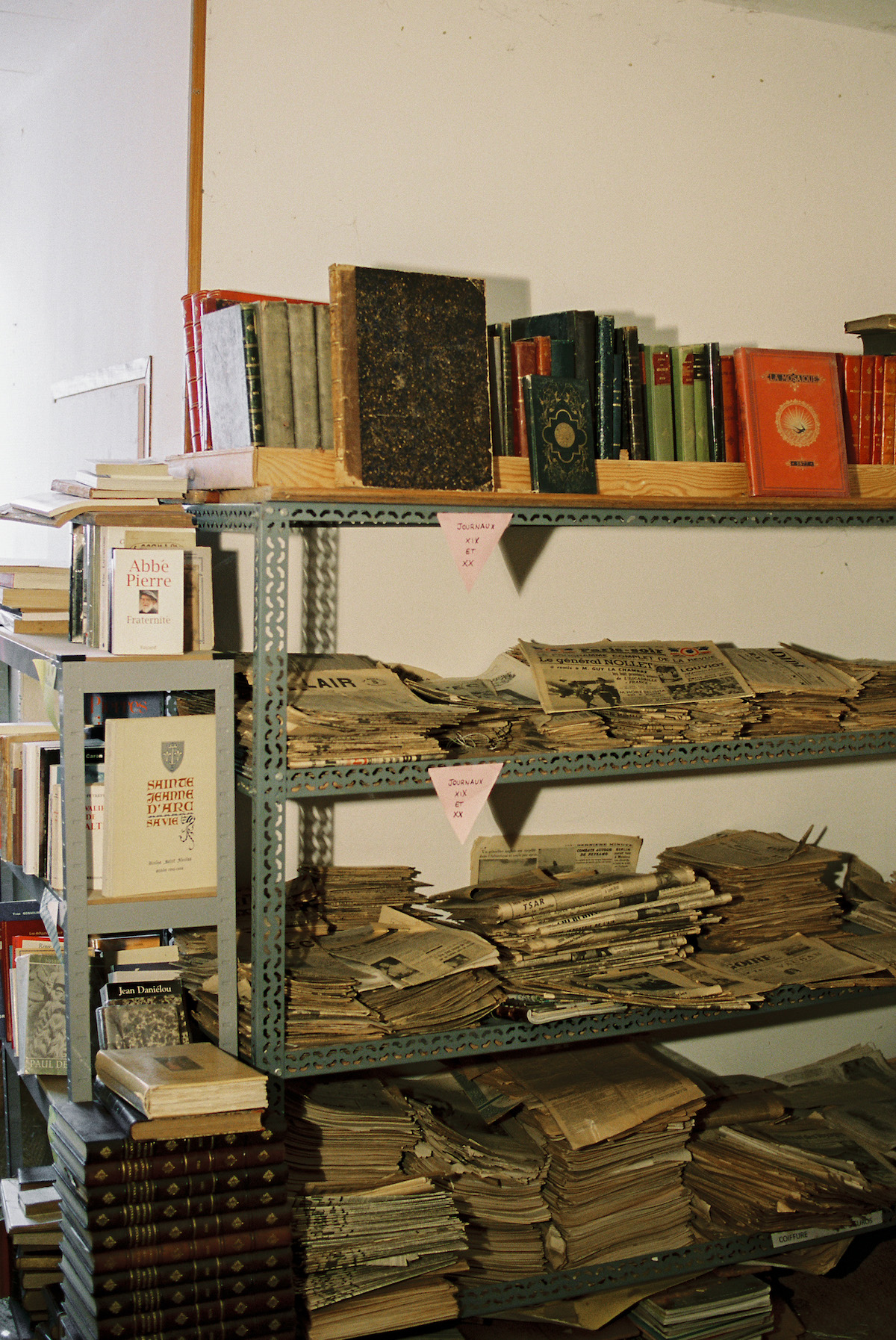 The entrance to Montolieu is sudden, the lack of a posted speed limit hurtled us into a quick deceleration as the village opened and closed around us. The tranquil scene was near disorienting as we exited the rental car, but as we began to walk up the curving stone walkway toward the village centre, figures began to emerge from doorways and conjoining alleyways as if from nowhere, and the low hum of village life became suddenly audible. Throughout the alleys were stacks of leather and cloth bound books sitting on doorsteps, signifying the entrances to bookshops that were piled floor to ceiling with rare and interesting works in both French and English, science fiction and romance paperbacks and dusty heaps of century-old yellowed newspapers. A cathedral bell rang in the distance, and we followed it to the town square where water bubbled from a decorative stone fountain opposite the late medieval church with the bell tower and a multi-level terra cotta roof: the tallest structure in the town. Old men in caps and sandals played petanque (a game similar to bocce or horseshoes), and two elderly women sat in plastic chairs with their backs to the wall of an ancient building carved from rock. They were talking and smiling together while looking out over the tops of buildings and the trees beyond and the silhouette of the mountains even further beyond. 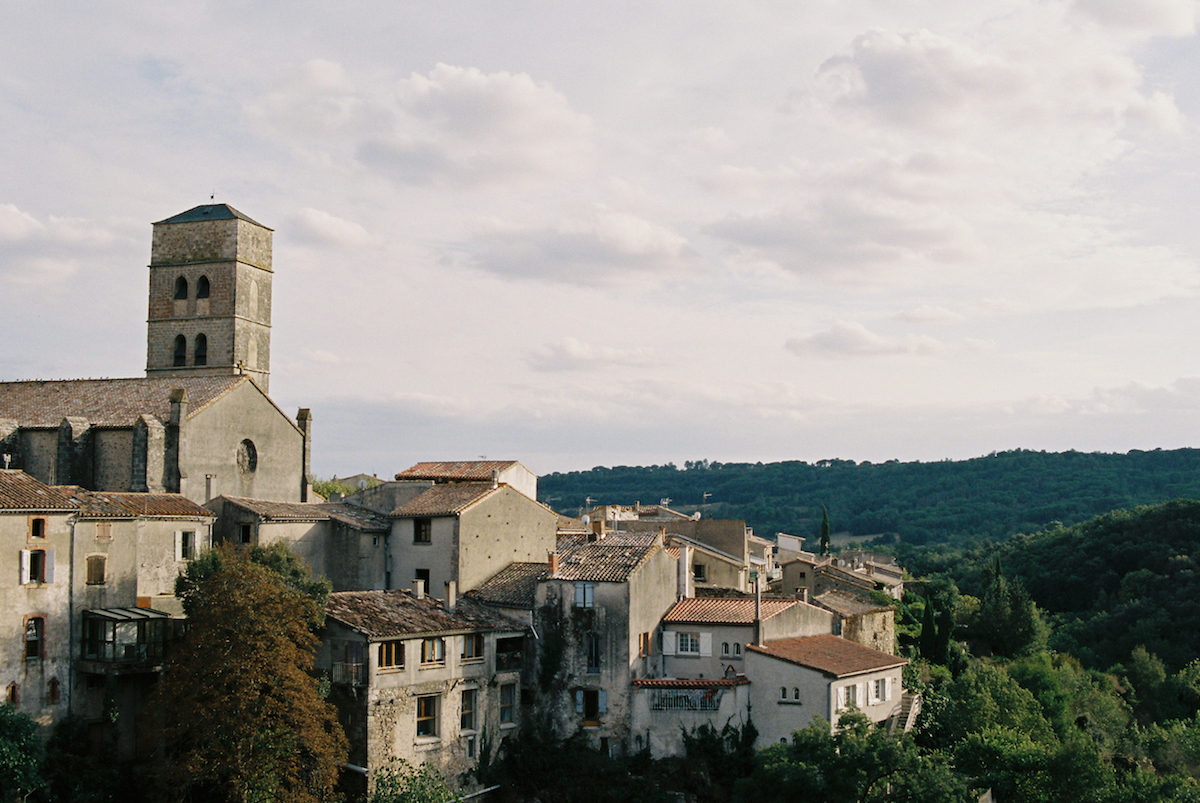 Nothing had been intended for the day but to explore; after the flurry of excitement and energy of having been in Paris for the previous week (for the first time), my partner and I were pointedly attempting to be uninhibited from reservations or must-sees or any logistical scrambling. 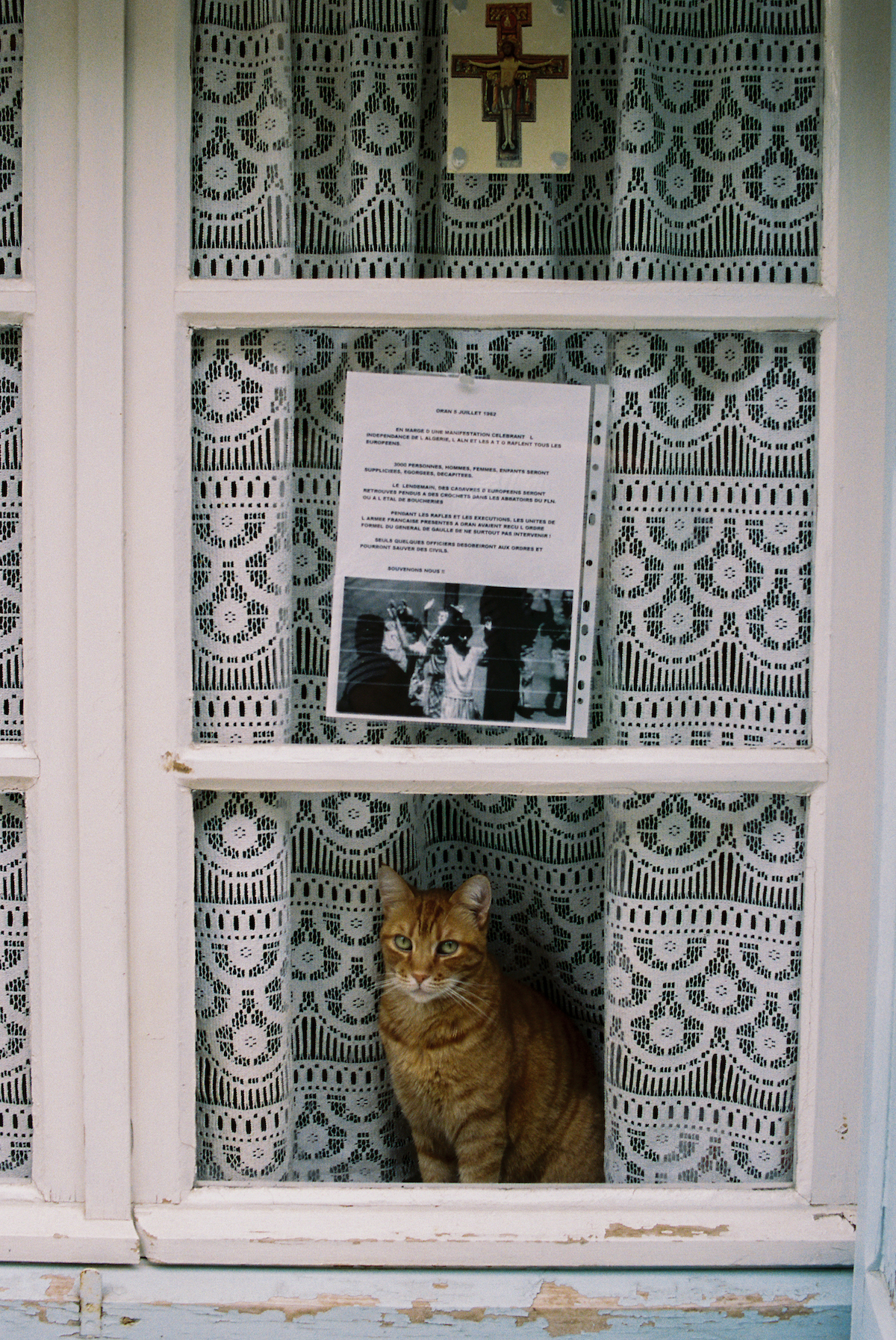 As we walked, cats lounged high above on windowsills or half-in, half-out of open doors, never responding to our finger-snapping invitations to a scratch behind the ear (the French word for cat is ‘chat’, which is easy to remember and fun to say, but French cats don’t respond to anything you call them, just like American cats). The continuous lines of the alleyways always seemed to lead back to the main square, where things were just as they had been before. The church bell occasionally rang, although no time seemed to pass. There was a dreamlike surreality to the experience, and the dusty colour palette of the village streets and the faded paint on old stucco against the cloudless sky called to mind works by Joan Miró, who was born not far south in Catalonia and painted under the same hazy blue and gold sky. 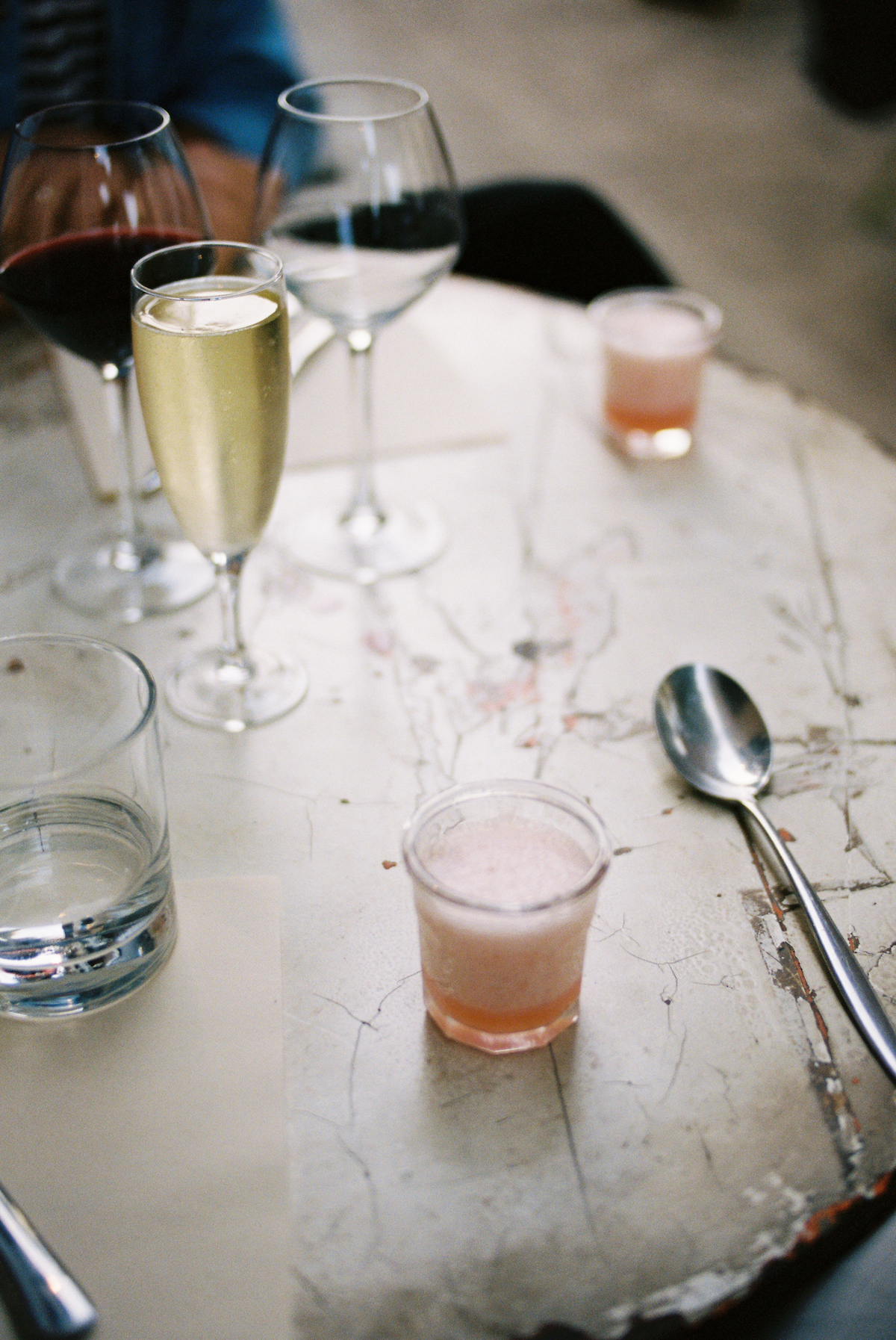 Continuing to wander, we drifted into a massive, palatial restaurant that was completely empty aside from a woman behind the bar, who informed us that they had yet to open for dinner but could serve us wine on the patio, and we agreed to sit and drink and linger until dinnertime. The wine was green and flinty and was going quickly. As dusk began to settle, the yellow streetlights illumined the open patio that slowly started to fill with people, and the din of voices and the wine and the comforting meal lulled us into a reverie that was snapped open when a waiter came outside and clapped two trays together, loudly, and a flurry of small black birds were startled out of the branches of the huge yellow trees above us. 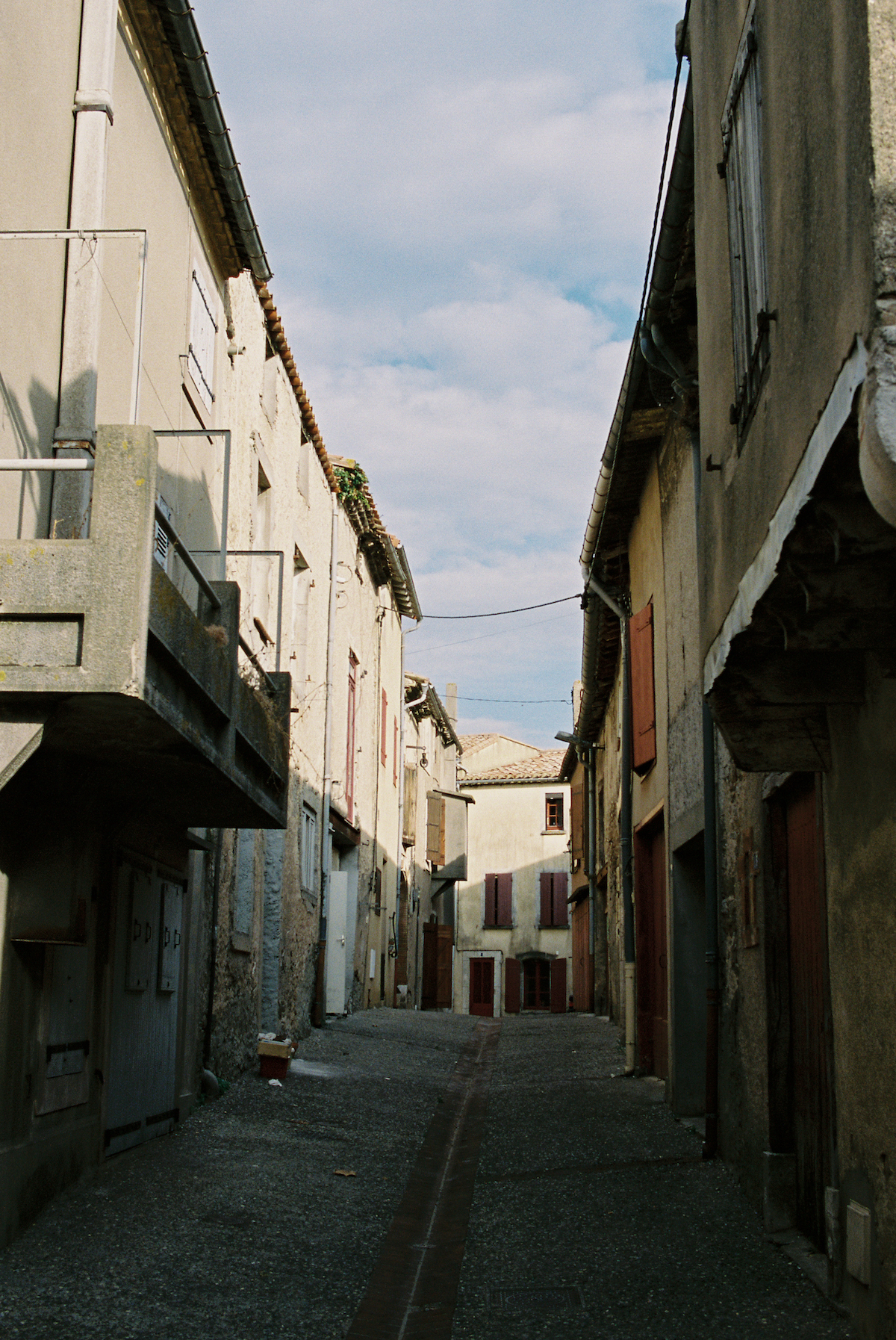 The drive back to where we were staying felt like a slow awakening, like waking in a theatre just as the credits begin to roll. The Village of Books was hypnotic and uncanny, but welcoming; ancient and still with no reason for or intention of stirring, content to exist as a place outside of time.