Dawn to Dusk: A HUF Story 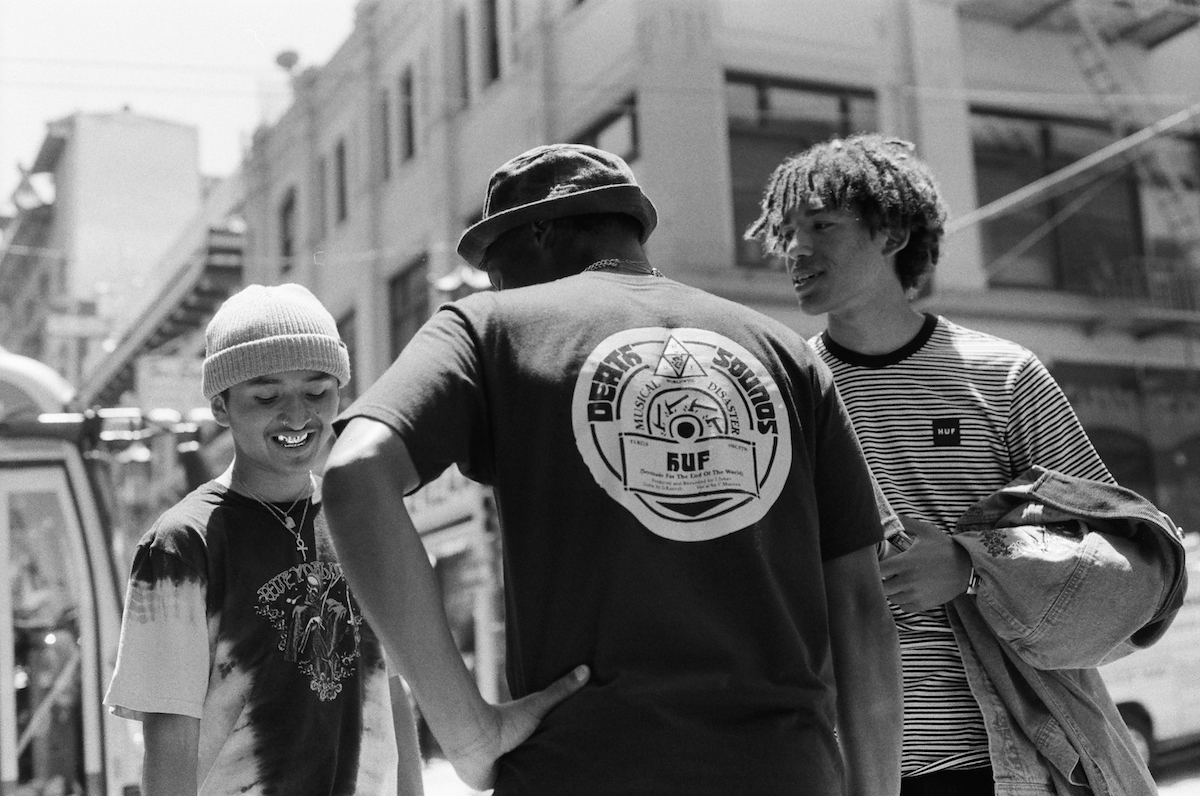 Skateboarding stands for something greater than a recreational activity, it is an ethos to live by, a lifestyle choice and an invitation to a universal community. When Keith Hufnagel founded the streetwear brand HUF in 2002, he focused on comfort and functionality, capturing the rebellious nature of this counter-culture movement in his designs. The brand started in San Francisco, a city that, like skateboarding, has gone through a transformation over the past twenty years. Photography and videography have such a symbolic relationship to skateboarding, and in an act of celebration for both the aesthetic and spirit of skateboarders Teeth Magazine paired with HUF Worldwide to follow a group of young skaters from the Bay Area through the streets of San Francisco.

We caught up with three native California skaters and creatives – Elan Watson, Jaminh Alorn, and Kevin Perez  – to discuss skateboarding as destiny. 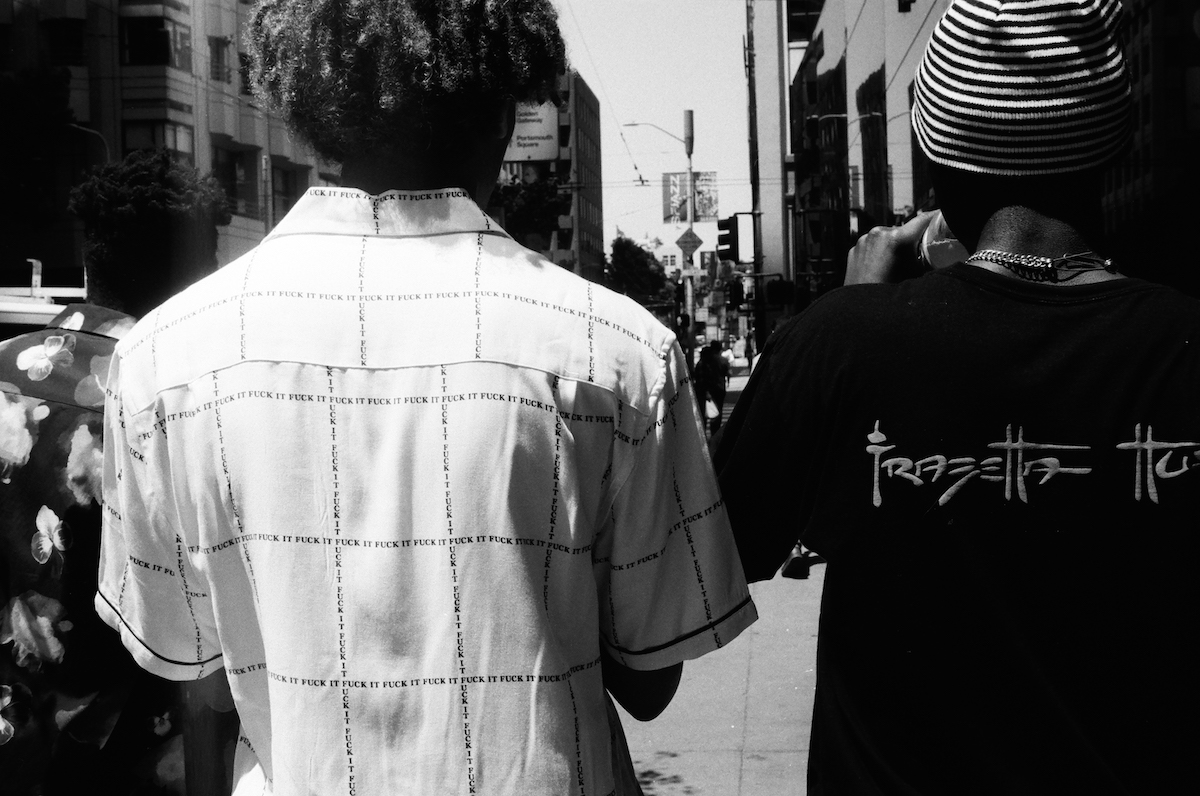 Madeleine: Tell me about growing up in San Francisco and the Bay Area, and how you all got into skateboarding.

Jaminh Alcorn: I love the city. It has influenced my skating ever since I was young watching skate videos, especially Thrasher. Growing up, I saw skaters going to San Francisco to skate the gnarliest spots and hills, it’s like an amusement park for skateboarding. I’ve met homies from all over. Literally everywhere, and I love it.

Elan Watson: I was born in San Francisco, but raised in Oakland. San Francisco used to be the skate mecca during the EMB days and there are so many legendary spots. Plus it’s super easy to get around without a car. I got into skateboarding because my dad skates, so I always had it in my life. Although I was more interested in what the photographers/videographers like Kyle Camarillo were doing.

Elan: Kevin was always doing video too, he was our videographer and would be filming everyone.

Jaminh: He started filming me when I was like, fifteen. 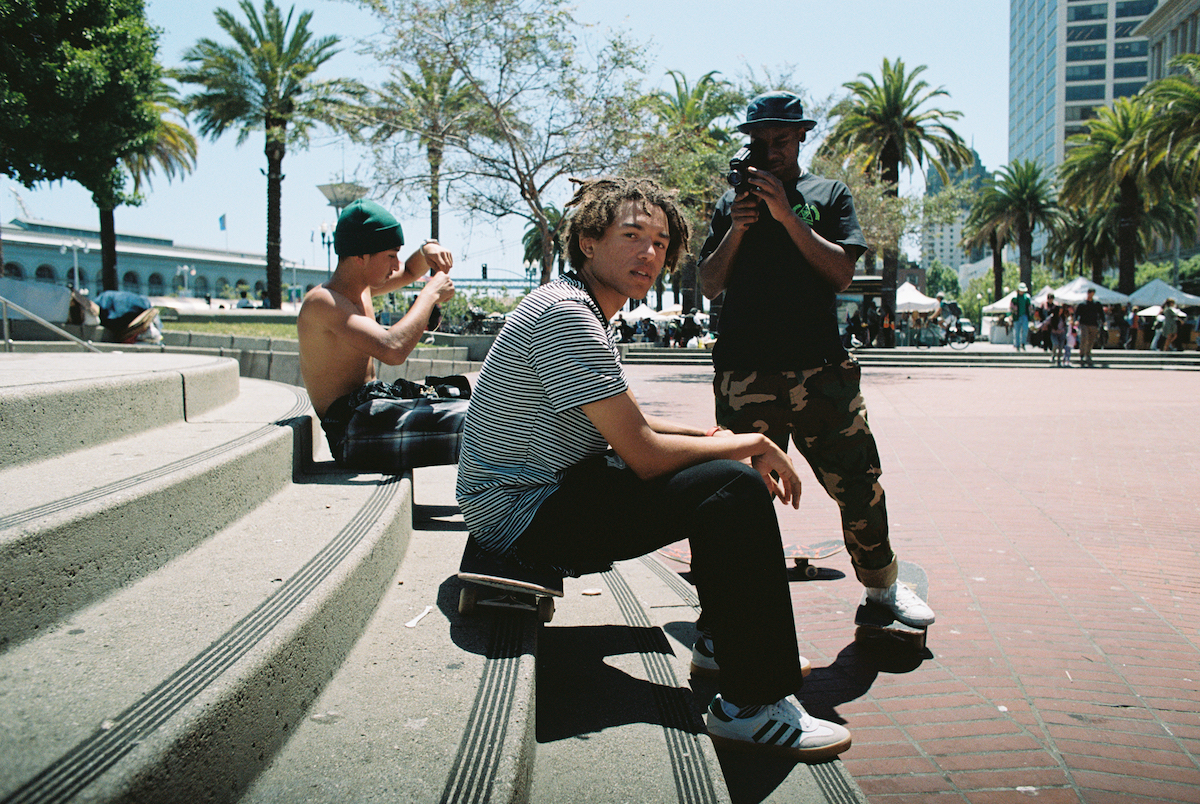 Madeleine: How did you all meet each other?

Elan: It was all super gradual, we all skated at the same skate parks. We recognized each other. We weren’t friends but we knew each other’s faces…

Madeleine: Was it skateboarding that brought you together or your creative projects? Everyone in your crew seems to be fully immersed in various creative ventures alongside skateboarding. I know you’re a filmmaker and a designer Jaminh, and Kevin is an entrepreneur and your photography…

Elan: We were so young that it was just about skateboarding, and then we all grew up together. I think my style of photography comes from skateboarding because I never started off posing people. When you’re skating through the city there’s not much time to have people pose, so [it’s] candid.

Jaminh: The culture in skateboarding has definitely changed since I first started to skate. We have the internet now so [people] post skate clips or edits on Instagram, and [then they’re] damn near pro! It’s tight but it’s not tight. I respect the OGs in the game from the way they dressed to their tricks and skate vids. They were grinding to film [before] phones, I feel like the internet kind of ruined the perception of what skateboarding really is.

Elan: I wish I grew up in the ‘90s! I feel like constantly recording what happens takes away freedom. I hear stories of when my dad was growing up and everything seemed so carefree. As far as skateboarding goes, I feel like there has been a huge shift in its culture. It used to be for outcasts and rebels, but now most trends come from skateboarding and it’s the cool thing to do.

Jaminh: People think a post on Instagram will make them more of a skateboarder. No, what makes you a skateboarder is rolling with what life swings at you – on and off the board. I respect the people who want to learn and are learning, but you can’t be halfway in skateboarding. It’s different from a regular sport because we see the real world when we skate the streets.

Elan: I think [the popularity of skateboarding] is a good thing though because skateboarding is special. It erases class, race, and a lot of other barriers that stop people from interacting on a day to day basis.

Kevin: And skater energy is irreplaceable, there’s no other thing like a skateboarder’s energy. We don’t care what people think, we just do what we feel, not what we see. 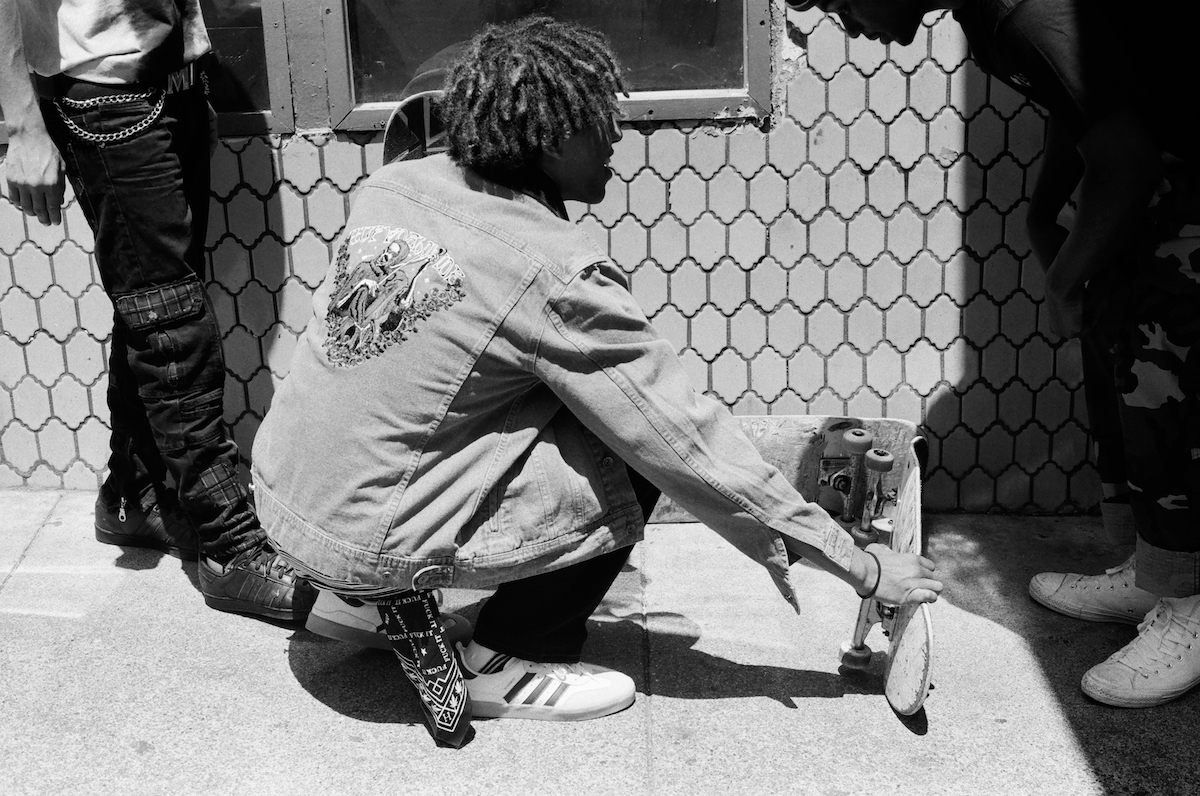 Madeleine: Can people have skateboarding energy even if they don’t skate?

Elan: Skating didn’t start as something everyone does, all the outcasts did it and now it’s something that everyone wants to do and everyone does. Some people that skateboard don’t have “skater energy”. Taking risks and forgetting your fears is what makes a skater, a skater.

Jaminh: When I was younger kids where I’m from kids used to see skateboarding as a ‘white boy’ thing, it’s definitely not like that now, there are actually a lot of black skaters now, but at that point in time it wasn’t really understood.

Elan: If you don’t skate then all you know is Tony Hawk, and everyone relates Tony Hawk to white people in Southern California skating and stuff, so when they see a black person skating they’re confused 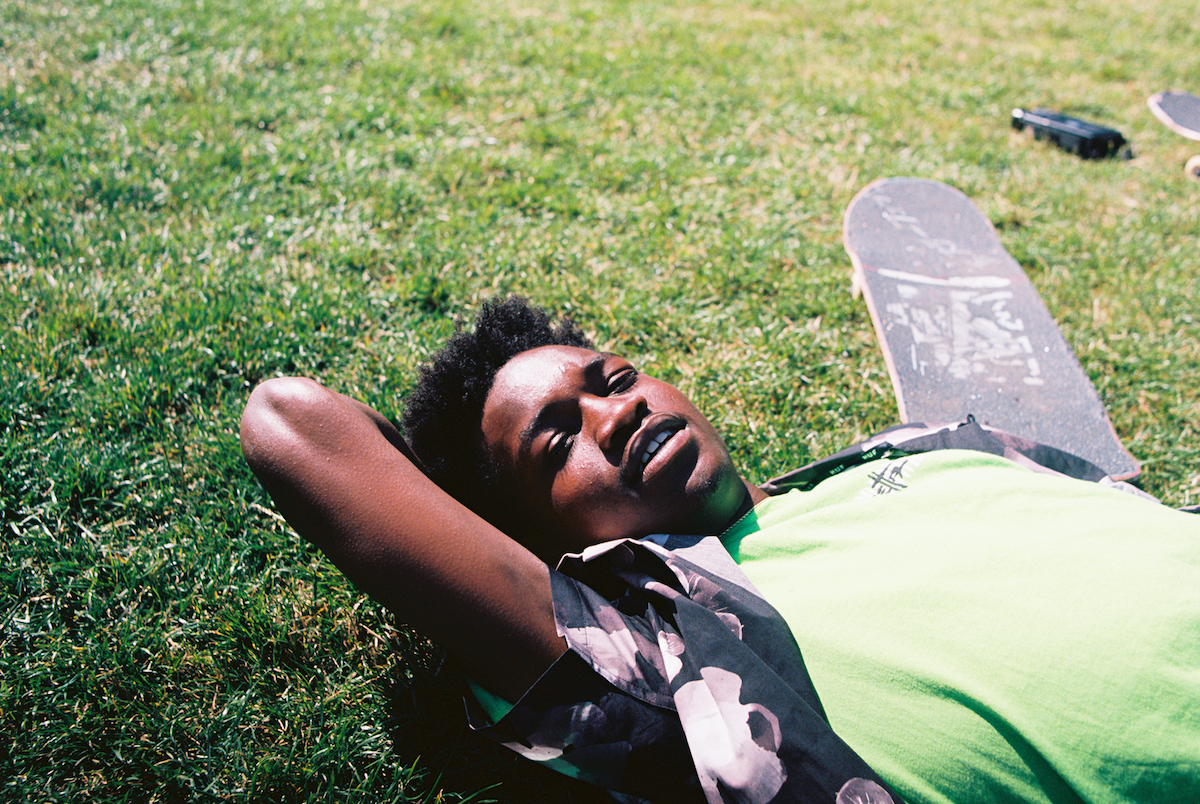 Madeleine: Skateboarding traditionally ingrates people of all backgrounds, and already the culture from when you were younger has shifted.

Kevin: I love skateboarding. My friends [and skateboarding are] constantly inspiring and motivating me to put my all into everything I do. 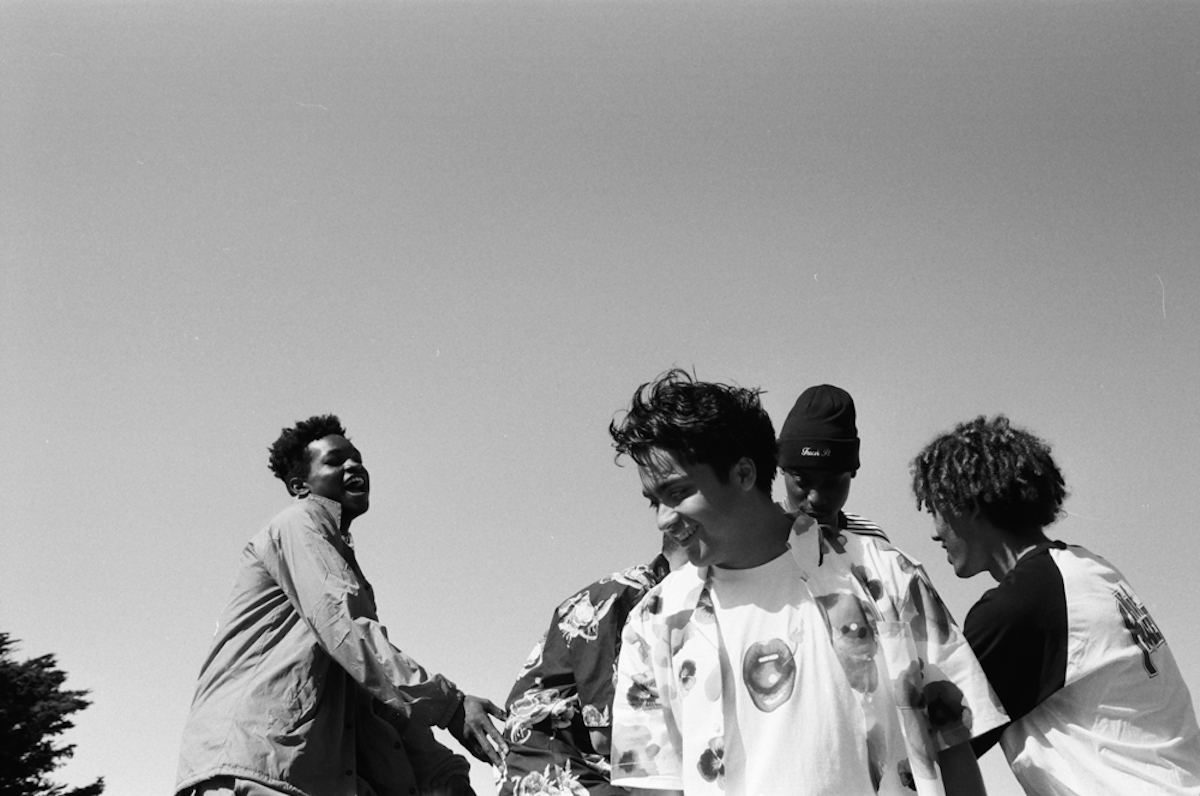 Spending time in San Francisco with this group of young, optimistic, and kind Californian’s was eye-opening. These skaters introduced to Teeth an insider’s perspective of what skateboarding culture is, something that is universal, inclusive, and genuine. Details that HUF recognises in its brand ethos and effortlessly iconic, functional streetwear. 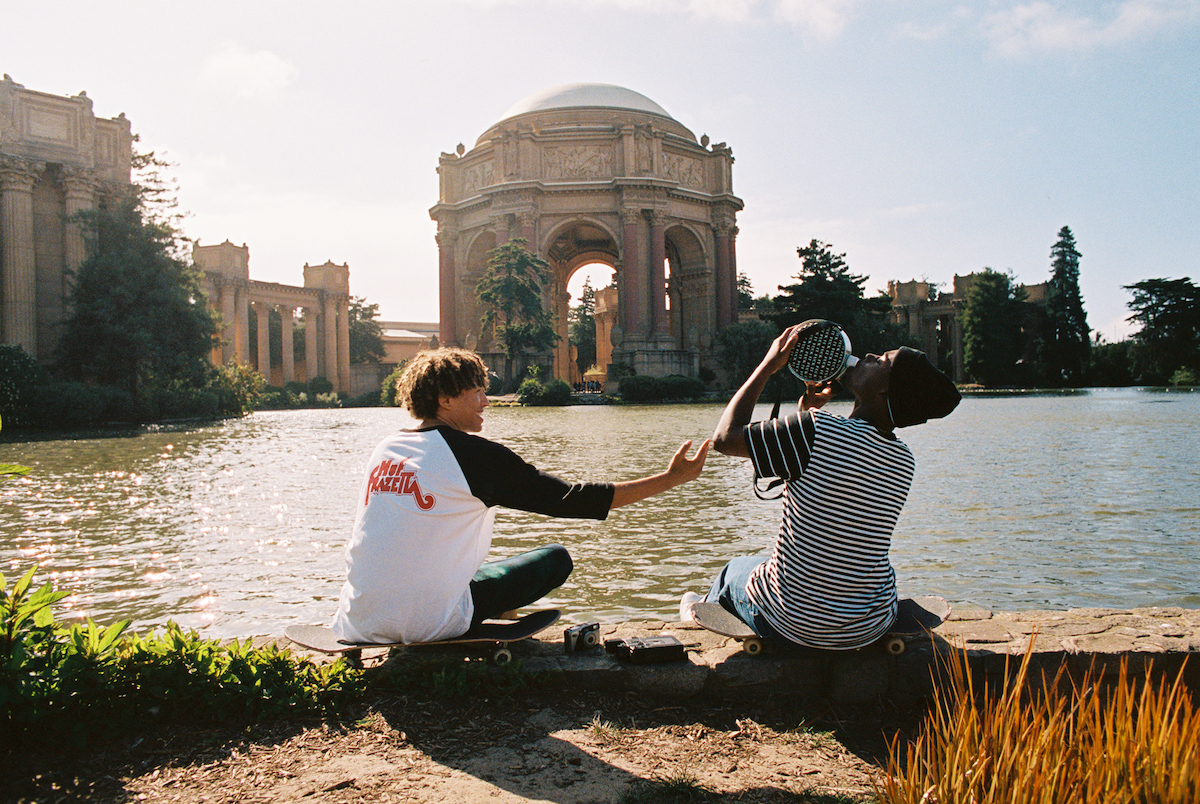 Elan wears the HUF x Frazetta Rocker Raglan and the John Easy Pant.
Jaminh wears the Fuck It Reversible Short Sleeve Knit Top and the 1984 Reversible Beanie and drinks out of the Fuck It Canteen.

You can see Jaminh’s filmmaking and clothing line at https://www.instagram.com/woozygoldie/

You can see Elan’s photography at https://www.instagram.com/elan.w/

You can see Kevin’s clothing design, djing, event promotion, and all-around entrepreneurship under MÌRAME at https://www.instagram.com/littlekevinperez/